Currently, Valley United Presbyterian Church sits within the bounds of the Presbytery of the Susquehanna Valley and the Synod of the Northeast. In a month’s time, the church’s Waverly, NY, address won’t change, but it will officially be part of the Lackawanna Presbytery in the Synod of the Trinity. 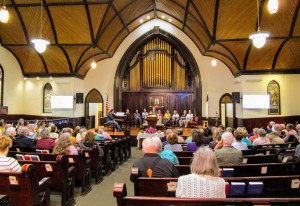 An overture at the 223rd General Assembly asking for the town of Waverly to be included in the Synod of the Trinity will allow for the congregation to be part of Lackawanna, a process that is four years in the making.

“I’m really excited about where we are right now,” said the Rev. Sharan Knoell Rosso. “If you would have asked me a year ago I probably would not have said the same thing because we were in sort of a darker place at that point. I’m just really excited to see what God is doing in and through us. Every time there’s a new surprise around the corner, a new idea or some new energy, that’s what’s been life-giving for me.”

Valley United Church is the culmination of three congregations that sat roughly four miles apart. Athens and Sayre Presbyterian Churches were located on the north-central edge of Pennsylvania, while Waverly Presbyterian Church was situated just inside the New York border a short distance away. Due to low attendance numbers, Athens and Waverly alternated hosting summer Sunday services in 2012, and Sayre joined in the rotation a year later. This led to a conversation about merging the three churches, and on Jan. 1, 2014 Valley United Presbyterian Church was born.

The Sayre Church, which was averaging a little over 20 people on a Sunday morning, was the smallest building of the three and lacked parking, so it was sold six months later to another church group in the area. This left Waverly and Athens, both of which were getting about 40 people on Sundays, to alternate as hosts for weekly worship. An architect was eventually hired to help determine the best route going forward – whether to worship in the Athens or Waverly buildings or construct an entirely new building. It was decided that keeping the Waverly building active was the most cost-effective solution, but this choice wasn’t met with complete approval.

“It was voted by quite a sizeable margin that that was the way the congregation felt God was calling us to go,” Sharan recalled. “There was a lot of emotion that came into play with that decision, specifically because the Athens Church is in a flood plain. They suffered from both the flood of ’72 and 2011, and there was also a fire there in the building in 1999. The church members that we have have literally rebuilt that church three times in their lifetime. Their blood, sweat and tears are in the walls and floors of that building.”

The Athens structure, which also had little room for expansion or to make it handicap accessible, was sold to the local school district and now houses administrative offices. Meanwhile, the Waverly building was made handicap accessible, renovated and expanded with a new social hall that purposely gave the property a fresh look.

“It’s got a totally different footprint than the old Waverly building so that it didn’t look like Waverly,” Sharan said. “It looks like a new church. That was very important. We had discerned that it was very important to our members at the time when we were designing the building that it did not look like we just moved into Waverly. In the process of updating, we also decided to go with new construction. So, it’s a partial renovation and a partial new construction.”

The construction is not yet completed, but that didn’t stop the building from hosting a combined May meeting for Lackawanna and Susquehanna Valley presbyteries. The 120 church leaders who gathered on that day are more than the average weekly attendance at Waverly that ranges from 50-80.

“Unfortunately, in deciding to not move into the Athens building, it proved far too difficult to deal with for a lot of our legacy Athens folks,” Sharan said. “There was sort of a mini-exodus of some of our legacy Athens members, and that’s hurt our attendance and our morale a little bit.

“I’ve preached since the very beginning that you’ve got to go where God is calling you to go. We would love for you to stay, but if that’s away from us, you’ve got to follow where God is leading. I just pray those folks are thriving wherever they are.”

One thing that has not affected the organization of this new congregation has been the cooperative efforts of the presbyteries and synods.

“That has been the easiest part of this whole thing,” Sharan said. “Both presbyteries are sort of used to our weird situation right now. It was worked into that paperwork back in 2014 that the church would ultimately get to decide which presbytery they wanted to be a part of. The congregation voted in the fall that Lackawanna and the PA side was the way to go, mostly because of Camp Lackawanna. There’s a lot of church members who grew up attending that camp and have sent their kids and grandkids and feel a very special connection to that place, so that led into the decision a lot.”

The only person having to make a move is Sharan, who is four years into her call at Valley United but was still a member of the Presbytery of Susquehanna Valley until the joint May presbytery meeting in Waverly. The only wrench that could occur now would come at General Assembly in St. Louis in June when the overture is discussed, but Sharan isn’t too concerned about that.

“We’re operating under the assumption that GA has far more important things to discuss,” she said. “We’re just a blip on the consent agenda, and it’s just going to be a rubber stamp sort of thing.”

One thing that Valley United Church needs to figure out in the near future is its identity, especially in the terms of mission work. But considering all the congregation has been through to this point, Sharan believes this answer, too, will soon come to the surface.

“One of the things we’re facing right now, because we’re kind of a new church, is coming up with a new mission, discerning who God is calling us to be in this community,” Sharan said. “We are trying to figure out ‘Who are we?’ and ‘Who does God need us to be in and for this community?’ I think that’s probably pretty new for them, but they’re open to the Spirit moving and they just don’t know which direction to go but they’re ready to go, which I think is a great start.”

Despite the bumps in the road, there is a bright future ahead for Valley United Church. And the process of prayer and discernment that has been occurring along the Pennsylvania-New York border will only make the final product that much stronger.

“Growing pains are always super difficult when you’re going through them,” Sharan said, “but when you come out of them you’ve got a strong sense of purpose and a tighter bond of fellowship because you’ve been through that together. And I think that’s where our congregation is now.”