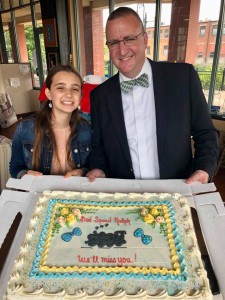 Ralph Hawkins shares a moment with his daughter, Ella, during a ‘Bow Ties & Goodbyes’ gathering in Shenango held in Ralph’s honor.

When Ralph Hawkins took over as the executive presbyter and stated clerk of the Presbytery of Shenango in 2014, the region had just come through a rough patch. Denominational issues in the Presbyterian Church (U.S.A.) caused many congregations in Shenango – and many other places throughout the country – to rethink their affiliation with the PCUSA, resulting in a large exodus of churches.

Fast forward four years and, with the help of Ralph’s leadership, the presbytery is on solid ground again. That accomplishment led Ralph to rethink his position in the presbytery and consider returning to the pulpit. It resulted in him accepting an offer to become the pastor at Northminster Presbyterian Church in Macon, GA, a call that will begin this fall.

“My sense of call to put my name in (to become EP in 2014) – I felt we came through a lot of difficulties in terms of denominational shakeup,” he said. “I really had a sense of call to help get us to a new normal. Part of my departure is, looking around starting the first of this year and sort of feeling like we’re kind of at a new normal.”

Shenango had 68 congregations within its bounds at its largest. Even though that number had reduced to 45 by the time he came on board, Ralph is proud of the steps the presbytery has taken during his tenure there.

“In some sense Shenango still has a lot of questions to answer about its future,” he said, “but I think in terms of internal stability, transitions in a lot of our pastorates and a kind of sense of the future on the other side of being about a third smaller in churches and about a half in membership overall, I feel like we’re in a good place.

“Morale seems to be good. People are grateful for the presbytery; there’s good involvement by our pastors and elders. I began to feel that some of the things I felt called to do in the short term, and maybe a little medium term, had come to fruition – or at least had borne some fruit – and that maybe it was time to think about what’s next for me.” 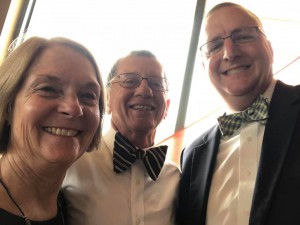 Ginny and Don Dawson pose for a photo with Ralph Hawkins during a goodbye gathering in late August. Don was the former director of the New Wilmington Mission Conference.

Ralph is no stranger to the South. Not only was he born in Alabama, raised in Louisiana and went to seminary school in Georgia, he also served a congregation in central Virginia for 10 years before accepting a call at New Wilmington Presbyterian Church in Shenango where he spent six years. Returning to the Atlanta area just seems like a natural fit for him.

“My roots are down south,” Ralph continued. “I have family down that way, my mother’s getting older. I’ve been describing this sense of call as not any one thing necessarily but sort of a constellation of things that have come together. It just seems like a good time to transition for the sake of the presbytery and the time in my life.

“It’s a good congregation. They seem very community-focused and mission-minded, which I appreciate.”

While finding another position at a presbytery was of course an option for Ralph, he preferred to seek a pastoral call that allows him to return to a position in a congregation that he’s drawn to.

“Like a lot of people who do EP (executive presbyter) work, I think there’s parts of congregational life that you miss,” he said. “For all of the preaching I have done as an EP – and it’s been a privilege to do that – I miss the weekly rhythm of preaching and teaching for a congregation. The liturgical, sacramental side of worship has always been important to me, and I’ve not been able to do much of that.

“The other thing that’s important to me, too, is that I do have a heart for community ministry. I’m looking forward to getting back into that, being on the front lines of a community, so to speak – being involved outside the walls of the congregation. After four or five years of emphasizing that, preaching that and pointing to that, I’m excited to getting back to doing that myself. I’m looking forward to rolling up my sleeves and being involved with some of that again.”

Ralph did do plenty of work when it came to equipping leadership in the presbytery, and that’s something he’ll always look back on fondly.

“I continue to feel so strongly, with others, about officer training, the development of good elders and deacons for our congregations,” he said. “Most people who know me know that’s something I really care about and have tried to pour a lot of time into. The EP role has been nice because it’s allowed me to bring that emphasis into the foreground, but not for the first time with Shenango. Shenango has done an excellent job over the years supporting its pastors.” 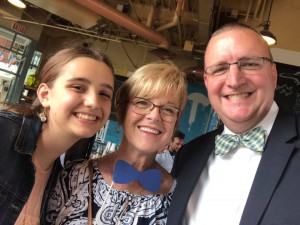 Ella and Ralph Hawkins flank Sandy Davis, who is part of a Dominican Republic partnership shared by several congregations in Shenango.

As Ralph exits from the positions of executive presbyter and stated clerk in Shenango, Bill Crooks and Matt Camlin will step up temporarily to fill some aspects of those vacancies, respectively, through the end of the year. With Beaver-Butler also seeking to fill its EP position after the retirement of Alan Adams, conversations have begun regarding the future leadership of those two presbyteries and what it might look like to share people in those capacities.

That kind of cooperation between presbyteries and congregations in and around Shenango is something Ralph will cherish and reflect on when he remembers his time there. That, and the people who he interacted with on a daily basis throughout the region.

“We really do have a wonderful group of pastors in this presbytery,” he said. “I have been really grateful for my colleagues here. We’ve had a lot of transition here in the last four or five years, a lot of retirements of long pastorates, and therefore a lot of newer and younger pastors coming in. It’s a great group. I’ve been really proud to support this group and welcome a new group of people.

“I’m really grateful for my fellow EPs in the Synod. That has been such a rich and important place of friendship and collegiality. I find that I walk away from those overnight gatherings encouraged and appreciative of my colleagues and what I hear happening in their presbyteries.

“The other thing I’ll miss is Shenango’s well known, and deservedly so, for its commitment to the global church. We have such rich history with Egypt, Sudan and now South Sudan, and Ethiopia through missionary support and church connections. That’s been just a fantastic privilege for me to be able to travel a little bit and represent the presbytery. I don’t feel like I’ve contributed much to those, it’s just been a privilege to stand in a long line of people who really worked hard to develop a lot of those partnerships.”

Ralph’s contributions to the presbytery have not gone unnoticed, and while the region is better off because of his work, Ralph will be quick to tell you that he, too, has received great benefit from his time in the Presbytery of Shenango.

“I feel called to pour myself into a community, a congregation or in this case a presbytery and try to pay attention to when that season is coming to an end,” he said. “I think things move in seasons. We’re all interims. No one outlasts the church. There’s grace in picking up a call, and I’ve learned there’s grace in putting it down, and we all need to practice both of those.

“I’m grateful for God’s good providence – more than I deserve, truly. Grace abounds in this kind of work as much as anywhere.”