Rev. Joan Stewart: ‘Flood work is not for sissies’ 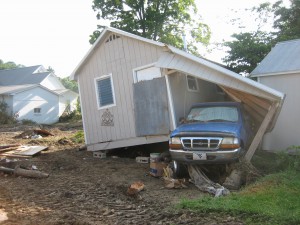 In White Sulphur Springs, WV, this shed was lifted off its foundation and moved about 30 feet. Teams from WVMAW bleached walls and 2×4’s after sheet rock removal and hauled debris to the curb. They emptied some tools out of the shed as well.

“A lot of the roads that should be paved don’t look paved anymore,” described the Rev. Joan Stewart as she surveyed the flood-ravaged areas in southern West Virginia. “They’re covered with mud and rocks and they don’t look like paved roads. You can see water lines up on houses. Garbage and debris are piled up on the curbs. One of the hardest things to describe in pictures is that a picture shows you a focus but it’s wide-spread with trees down and cars floating and a building in a tree.”

While it’s said a picture is worth a thousand words, even that isn’t enough to explain the whole story these days in West Virginia where heavy rains – an estimated 12 inches fell in a few hours in Greenbrier County on June 23 – changed people’s lives forever.

“The stench is something that a picture can never convey,” Joan continued. “In White Sulphur Springs, in particular, the fish hatchery was flooded. There were dying fish in the streets. If you can imagine adding to the moldy smell, the mildewy smell and whatever smell sewage and everything else that gets mixed in there and you have the dead fish smell. It was pretty bad.”

Joan is the director of the West Virginia Ministry of Advocacy and Workcamps, Inc. (WVMAW), a disaster response branch of the Presbytery of West Virginia formed in 2002 that provides long-term recovery. WVMAW, which is also known for coordinating mission work aimed at helping the poor, has been active during this “1,000-year flood” that has claimed the lives of 23 people and destroyed or severely damaged an estimated 1,200 homes. While WVMAW does have two groups of first responders helping “muck out” and clean up, the agency’s goal is to rebuild in the months and years following the devastation.

“You have your first responders – and I always say the Baptists and the Mennonites sleep with chainsaws and they’re ready to go. This is what they do and they do it well,” Joan explained. “The Presbyterians really didn’t need to interfere with what was a fantastic response. But when they (the first responders) go home, long-term recovery is what is needed. So we’re here for the long haul. We will be here for good until it’s done. We’re waiting right now through this assessment phase.”

Joan said there are groups planning to travel to West Virginia in the months ahead that will be scheduled through WVMAW to help the flood victims. Their jobs will be to reconstruct and rebuild homes that were cleared of flood mud, water and debris by the first responders.

A WVMAW team from Asheboro, N.C., loaded this trailer 11 times with debris to haul to the curb in Caldwell, W.V.

“FEMA (Federal Emergency Management Agency) will go in and do an assessment to see who qualifies for FEMA insurance and how much and what that can replace,” Joan explained. “The maximum I believe is $33,000. In some cases that will be plenty. In other cases it doesn’t begin to touch it. So we will be there to help stretch that dollar by providing the labor. Or, for those who don’t have enough, we can do what we can to help supplement that. And for those who do not qualify for FEMA insurance for whatever reason, we are able to come in and use funds to help get them back to what they were before. Long-term recovery means reconstruction and getting them back to where they were before the flood hit.”

Whenever a disaster of this magnitude hits a region, the response from people is usually enormous, and this situation is no different. Congregations and other organizations hold food and clothing drives and collect money to send to the affected area, all of which is positive. However, the people who hop in their vehicles moments after a tragedy and drive their truckload of items to the site can do more harm than good.

“The response has been coming out of the woodwork,” Joan said. “Yesterday was sort of its own disaster of people showing up with supplies and things they assumed that was needed. They were very generous but there was nowhere to put them. All of the warehouses are filled up and people are still showing up with things that are not being asked for. They have big hearts, they mean so well. I have a group coming soon that had mentioned some things that they were going to bring but those are things that we need in the first week. We don’t need those things by the time they arrive in August.”

Joan urges people to call Volunteer West Virginia (304-558-0111 or 800-WVHELPS) before bringing items to the disaster areas. Among the things that are needed are cleaning supplies and personal items like diapers (baby and adult). One church donated gift cards for gas stations and to Wal-Mart where people can buy things like undergarments and feminine products.

“Clothing is absolutely the worst thing to send,” Joan admitted. “It’s the easiest thing for people to get rid of. They don’t wear it anymore so they get rid of it. Clothing – you have to be able to go through it, you have to be able to size it. Sometimes people send things that probably should have gone into the dumpster. We get garbage bags full of stuff and we just don’t know what to do with it.” 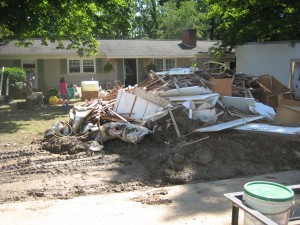 This is a common scene around White Sulphur Springs, WV, as a family’s belongings have been destroyed by flood waters and moved to the curb.

Manpower is another thing that comes in droves in a time of crisis. And while it’s needed and appreciated, helping clean up during a crisis is hard work and not for everyone.

“Flood work is not for sissies,” Joan said. “A lot of people want to help and they want to come right away but we need them in the long haul. The work is hard, it’s not glamorous. So many people want to go back home with a ‘glamorous story’ about what they did. There’s not going to be anything to show for what you’ve done. The family is going to know more than that, God is gonna know what they did, but it’s not going to be something that’s going to be glamorous. We love that people do want to come and help initially but we also want people to know that in the long haul it’s going to be as meaningful as those who came right away.”

People who come to the area don’t need to be craftsmen, either. There are plenty of opportunities to provide support in southern West Virginia without donating items or using a hammer.

“God is present,” Joan said. “There is no depth that we can go where God is not present. Using the Psalm ‘God is our refuge, our strength, a very present help in time of trouble’ has been one of just sitting beside someone to listen. I think the roles of pastoral care have been just to hold the hands and say, ‘Ain’t it awful.’ I can’t speak for where was God is in this, I just know that God is present in the recovery. I know that God weeps at what has happened. I don’t blame God for this, although I know there are those who do. I think those who do we just need to sit and listen to them and let them blame God because God’s big enough to take it. But the important thing is to listen and feel God’s presence.”