The Rev. Lee Dreyer stands next to gallons of water that are stacked at the White Oak Springs Presbyterian Church that help a local community get clean drinking water.

Jesus may have used water to turn into wine, but there have been no other uses for what is coming out of the faucets for the past six years in a small community in western Pennsylvania. The Woodlands, located in Butler County about 35 miles north of Pittsburgh, has been without clean water since 2011. Local fracking – the act of drilling with a high-pressure water mixture that breaks up the ground and helps release gases that are then extracted by gas companies – has been blamed for the situation, although no one has been able to prove a direct link to it and the water problem.

“At best the water that was coming out looked like iced tea and at worst it looked like used motor oil,” described the Rev. Lee Dreyer of nearby White Oak Springs Presbyterian Church. “It was really nasty, smelly, disgusting stuff.”

It wasn’t long until Lee and his congregation became involved with the “Water for Woodlands” program that would take water to the community on a weekly basis. As the situation extended from days and weeks to months and now years, and with the roads in that area being unpaved and treacherous to navigate at times, the gallon jugs of water were no longer delivered but instead are now available for pickup at White Oak Springs Church. The residents in The Woodlands drive once a week to the church to get their supply of water, with 50-60 families hauling 20 gallons each back to their homes.

It’s estimated that a person uses four gallons of water per day, so for a family of four, that 20 gallons doesn’t go too far. To combat the problem, families will go to a relative or friend’s house to shower or may be able to bathe at work. Some also collect rain water for this purpose.

“You can have somebody who lives in a house that’s badly affected by the fracking and then if you go a few hundred yards down the road and their water is not harmed,” Lee said. “There are different water tables that they draw from and there seems to be different levels of toxicity. Some water looks almost normal and others it’s dark brown or black in appearance.”

Some residents have “water buffaloes” on their properties, which are large tanks that, for a fee, are filled with clean water by local water providers or fire departments. However, this water isn’t safe for drinking, only for things like washing clothes or showering, and most of the people who live in The Woodlands can’t afford that service. 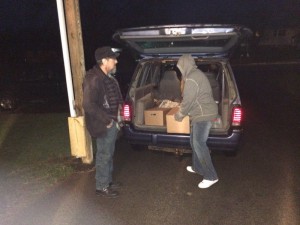 Water buffaloes were prevalent early on in this process as the fracking companies had them set up around the community right after the water situation arose. But when tests came back inconclusive regarding whether the fracking was causing the water to be contaminated, the water buffaloes disappeared.

“As soon as that report came out that it was inconclusive, those gas companies came out and took those water buffaloes out,” Lee said. “They poured the water out on the ground and off they went. It was heartless.”

The Woodlands was originally set up as a hunting and fishing retreat area for the upper class in the Pittsburgh area. Located just a few miles from White Oak Springs Church in Renfrew, the area didn’t thrive like the builders thought it would and eventually had to be sold off in lots. For the most part, trailers and campers have inhabited the land and are owned by people described by Lee as “the working poor.”

“It’s a small pocket of poverty in our township,” Lee added.

In 2011 when the fracking began, the water supply in The Woodlands became contaminated. A group that had been set up to protest the fracking formed a rally at one of the gas companies and asked people to bring water for those who had been affected. One of Lee’s friends was part of the group and asked Lee if the water could be stored at White Oak Springs Church. Lee agreed, and from that point on the congregation was involved.

“Pretty soon it became evident that these people needed to have some water supplied for them for drinking, cooking, bathing, so that’s when the water bank was set up,” Lee recalled.

Some families are involved in litigation over the water problem, but there does not seem to be an end in sight.

Every week, Lee calls in an order of between 200-400 gallons of water to Crystal Springs, which delivers to the church. On Mondays, volunteers are available at the church to load up the vehicles for those who make the trip to Renfrew for their water. Not every family comes every week. While the residents of The Woodlands are friends of people in the community, only one family that attends White Oak Springs Church lives there. 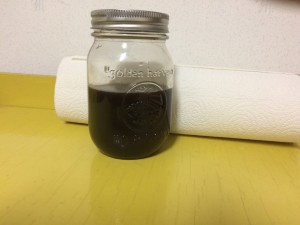 This is what the water looks like that is coming out of a faucet in The Woodlands community.

“A lot of people ask me, ‘How much longer are you going to have to do this?’” Lee said. “‘I don’t know. As long as necessary.’ I can’t imagine going years without clean water in the home.”

Money for the water comes from contributions from people as far away as New York. In the six years that the Water for Woodlands program has been occurring at White Oak Springs Church, only once for a three-week period was there not enough money to purchase water for the community.

“When there is an article in a newspaper, we get contributions from those areas,” Lee said. “I got a check here once from someone who lives in Central Park West in New York City. How they found out about it I don’t know. I have never been interviewed by the (New York) Times or (New York) Daily News.”

While some organizations will contribute, Lee said most of the time money comes from individuals in the form of $20 to $50 checks. There are a few churches in the area that also collect water, and Lee and his crew will pick up those donations on a regular basis as well.

It’s a process that has touched many lives and will continue to do so until the problem is corrected.

“God planted the seed. God’s people saw the need and somehow through God’s grace and God’s intervention, God has provided,” Lee said. “The fact that we have been doing this this long and have not run out of water or run out of money for the water except that one short period I think is just a wonderful testament that God’s people are responding to God’s call to help their brothers and sisters, their neighbors.”

Note: Monetary contributions can be made to “Water for Woodlands” and sent to White Oak Springs Presbyterian Church at 102 Shannon Road, Renfrew, PA 16053.