Being a moderator is all in the family for Judy Veon, Lou Nyiri

Holidays are a time for families to gather around the table and catch up on what they have been up to since the last time they were together. The conversation around the Veon table might be a little more interesting this year.

Judy Veon is a Ruling Elder who attends New Wilmington Presbyterian Church. She also took over the moderator role for the Presbytery of Shenango earlier this year. Her son-in-law is Lou Nyiri, the Associate Pastor at Gettysburg Presbyterian Church. He is the current moderator for the Presbytery of Carlisle. Having two moderators in the same family, while most likely not a one-of-a-kind situation, is definitely rare and unique. 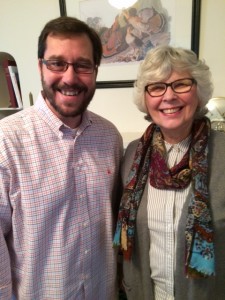 “I’ve seen something written about parents and their children (being moderators), but I’ve never heard of anyone with a son-in-law or a mother-in-law who were moderators at the same time,” Judy said.

“I served back in the ’70s on the Council on Women in the Church in Lake Erie Presbytery, and I was so thrilled one time to meet Lois Stair – she was our first female moderator at the General Assembly. So I was honored to be asked to serve for that reason.”

Lou is pleased as well to be part of such an uncommon dynamic in the Veon household.

“Sometimes I ask him questions about how he does things in Carlisle Presbytery,” Judy added. “Sometimes I ask just to find out how they do things in different presbyteries. Not everyone does things exactly the same. I probably ask him more than he asks me. One of the questions I’ve asked him is, ‘How do you prepare for the presbytery meetings?’ Shenango Presbytery meets at night while Carlisle Presbytery alternates between daytime and evening meetings.”

While Lou and Judy wouldn’t go as far as to say that the relationship between the Carlisle and Shenango Presbyteries is any stronger because of the family ties between the moderators, they would agree that this common denominator has given them another point of connection both within their family and the broader PC(USA) family.

“Lou and I are good friends and it’s very easy for me to go and ask him questions as well as for him, I think, to ask me questions,” Judy said.

Lou agrees, saying, “It’s nice to hear how folks in other presbyteries handle their discussions.”

Judy has served on her church’s session for six years and was on the presbytery’s Committee on Ministry for another six years while also being on the Synod of the Trinity’s Personnel Committee. So to say she knows her way around the Presbyterian Church would be an understatement.

“I was nominated because I’ve been on the Committee on Ministry and I’m also active with the presbytery’s Sudan team and the Sudan Network,” Judy said. “So people knew me and I was told that I was one of the elders who was most active in the presbytery. Shenango Presbytery alternates the nominations for moderator between Teaching Elders and Ruling Elders.”

Judy admits she was not even aware that Lou was a moderator in Carlisle until she was named one in Shenango.

“I didn’t realize he was going to be moderator as well. We didn’t have it planned out at all,” she said with a laugh. “We thought it was unusual. We haven’t talked in depth about it. We are just pleased to know each other’s doing it at the same time.”

Lou agreed that it wasn’t ever a topic of dinner conversation, although it was a pleasant surprise when they realized both would be serving in this role.

Judy is in the middle of her three-year moderating role in Shenango, having served as vice moderator for one year before becoming moderator in September. When she exits that role in June of 2016, she will spend a year as the presbytery’s moderator of the Coordinating Council. Similarly, Lou’s term as moderator will expire in February of 2016 and comes after a year as vice moderator and will also include a 12-month stint on Carlisle’s Coordinating Council as outgoing moderator.

Both Judy and Lou would agree, “Our polity is a wonderful gift that helps us have the tough conversations in positive and productive ways.”

Lou met Judy’s daughter, Candace, on their first day at Pittsburgh Seminary when they were seated next to each other in the opening exercises and then also paired together for the seminary tour. They have been married for 19 years and Candace is currently the stated supply associate pastor at Silver Spring Presbyterian Church in Mechanicsburg.

It all adds up to a unique situation and family that is beaming with pride these days.

“I am very proud of them and all the things that they do and have accomplished,” Judy said. “They are a good team and have done a lot of good things together.”

They both agree that it is a privilege to be moderator of their presbyteries during these key moments in the denomination. And, who knows, maybe a copy of Roberts Rules of Order will land in each other’s stockings for Christmas.