A year later, Girard Church remains optimistic – and together 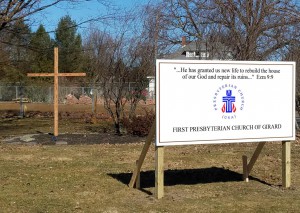 An empty lot where the First Presbyterian Church of Girard, PA, sanctuary building used to sit is empty following a fire that gutted the structure in July of 2018.

As flames shot up through the roof of the Notre Dame Cathedral in Paris in April, causing the 13th century building’s iconic spire to tumble to the ground, the images being shown on television and printed in newspapers were all too real for the congregation at the First Presbyterian Church of Girard, PA. Just nine months earlier, this Presbytery of Lake Erie congregation had experienced its own devastation as a blaze ripped through its sanctuary building, completely destroying the 127-year-old building.

“That brought it back for people,” said the Rev. Nicola Vitiello, “just watching the church burn on TV like that.”

It’s been more than a year since an early Sunday morning blaze in July of 2018 completely gutted the Girard Church, leaving the congregation stunned and without a place to worship. The cause of the fire was never found, and an official estimate on the damage has not been determined. The plan is to rebuild on the site, but it’s been a slow go and it’s estimated that it might not be until 2021 when a new building is constructed and furnished.

“We’re still working on plans with the contractor,” Nicola said. “It’s making progress, but there won’t be a groundbreaking this year. We’re hoping for some time next year.

“We don’t have a real estimate of how long it will actually take to do the construction. Then, the church is going to have to purchase an inordinate amount of things to replace everything that we want to replace. The hard part is now we can’t buy a ton of stuff because we just don’t have a place to store it. We’ll have to wait until the building’s mostly done and then you start going to buy these things and that’s going to take time.”

Despite the loss, it has enabled the congregation to refocus, to understand some new things about itself.

“We’re thinking about ‘What is church?’,” Nicola said, “and not so much thinking about church is just a building. When your building goes, what do you have left? People are realizing we have each other, we have God, we have support from people. 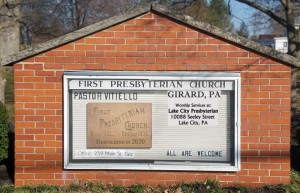 A sign at the Girard Church lets people know that a rebuilding project is in the works.

“The people have been resilient. It was such a devastating thing that happened. I think there has been a resiliency that has carried things forward in making it so that with the challenges there hasn’t been an anxiousness among the leadership. There’s a resiliency of wanting to move forward. It’s also a neat time to observe ideas better being brought forward. What is this new building for and how can it be used?

“It’s forced the congregation to have conversations it didn’t have before. We’re having conversations about mission and community that weren’t there as much before.”

The Girard congregation has been worshiping at nearby Lake City Presbyterian Church. Just five minutes down the road, the Girard Church holds its services after Lake City’s 9 a.m. worship. This also allows Girard to overlap its Sunday school classes when Lake City is in the sanctuary.

“It’s become a temporary home,” Nicola said. “I think that people have settled in to being there. It doesn’t feel strange to be there. That church has been very hospitable to us, so it’s worked out well. We’ve been able to find that two congregations can use the building without really bumping into each other.”

The only things saved on the Girard lot were an adjacent building that houses the church’s food pantry and the congregation’s prayer garden. This means that Nicola and the church secretary are relegated to using rented office space in a building across the street from the Girard site. Nicola has space at Lake City where he can work as well.

A one-year anniversary remembrance of the fire was held in July, allowing the congregation and Girard community to come together to continue to mourn the loss of the structure.

“I talked about in the sermon where the congregation has come in the past year, what they’ve accomplished and working through the stages of grief to get to the sense of acceptance of the loss,” Nicola said. “We’re transitioning from sorrow to anticipation of what will come in the new building someday.” 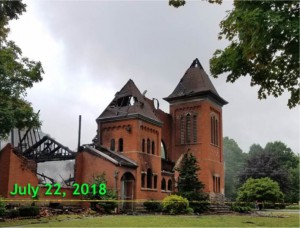 This is what remained of the Girard Church building after a devastating fire on a Sunday morning in July of 2018.

On this anniversary, neighboring congregation Wayside Presbyterian Church presented Girard with 70 books for the children’s library, a gift that was made possible thanks to Sunday school offerings that were collected at Wayside.

“They donated some of their favorite books,” Nicola said. “The adults started catching on to what the youth were doing, and they started donating money. That spread into APCE (Association of Presbyterian Church Educators) and we got some more donations of books.

“Some people from Wayside came that day. It was a surprise to everyone in the congregation. They presented them to the kids on that day to have something that’s hopeful happen in that anniversary service. It was a real nice gesture there.”

The fire has pushed the congregation to create a new mission statement. It also prepared two dinners for the local fire departments as a “thank you” for their efforts in battling the blaze.

“The church has received so much generosity that it’s been a very good lesson in learning about how the body of Christ helps each other out in times of need,” Nicole said. “We have also formed some new partnerships. We formed a Bible school partnership with the Methodist church in Girard, and we held a joint worship service with two other Presbyterian churches that are nearby.”

Fundraising has also been a part of Girard’s last 12 months. A GoFundMe page has been established that the community has been steadily adding to, and contributions have been received by the church, both through weekly offerings and in the mail from as far away as the Presbytery of Nevada. The congregation is also selling bricks from the building as a fundraiser.

“We’ve gotten thousands and thousands of dollars – I don’t know an exact figure,” Nicola said. “We have had most of the churches in our presbytery either send a check or they donated office supplies or markers for kids for Sunday school.”

All in all, what occurred on July 22, 2018 has been a devastating tragedy to the congregation at Girard Presbyterian Church, but it’s also strengthened them and made them realize that unthinkable obstacles like this can be overcome.

“The congregation has not only stayed together but has grown closer,” Nicola said. “It’s an odd thing how sometimes a tragedy, a disaster can bring everyone together when it could have caused separation. Just receiving so much generosity has made the congregation appreciate that.

“God has worked within each individual to help us all heal. Now that the building was demolished in the spring and nothing’s standing there in the ground, that’s still hard for people to see and drive by. There’s always that reminder that the fire happened.”