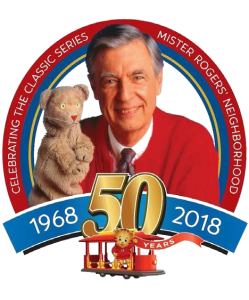 It all began at WQED in Pittsburgh in 1968. Fred Rogers brought his unique style and creativity with puppets to the television station where Mister Rogers’ Neighborhood was born. And now, 50 years later, the legacy and impact Mister Rogers had on television and families everywhere is being celebrated where it all began.

WQED is spending this year honoring Mister Rogers’ legacy through promotional material and commercials that can be found at wqed.org. One of the television spots was produced by Presbyterian Media Mission. In a joint venture with Presbyterian Church (U.S.A.) friends the Synod of the Trinity and Pittsburgh Presbytery, the PMM-created commercial explains a side of Fred Rogers that is not as well known as his famed children’s television show – the fact that he was also an ordained Presbyterian minister. See the commercial here.

Hear Fred himself explain his intentions of becoming a minister in Pittsburgh Presbytery in this rarely-heard, rediscovered audio piece from the PMM archives. WQED has created a special web page that is devoted to the 50th anniversary of the Mister Rogers’ Neighborhood show.

“Fred Rogers of Mister Rogers’ Neighborhood in Pittsburgh is as much a household name as notable sports figures like Roberto Clemente or ‘Mean’ Joe Green,” said the Rev. Sheldon Sorge, the general minister to Pittsburgh Presbytery.

Want to show the 2018 Mister Rogers documentary “Won’t You Be My Neighbor?” in your church? You can by signing up for a Church Video License International (CVLI) license here.

Fred began attending Pittsburgh Theological Seminary in 1955, taking classes during his lunch breaks while working at WQED on The Children’s Corner, which was a precursor to the Mister Rogers’ Neighborhood show. It took him eight years to graduate, and when he did in 1963, he didn’t search for a ministerial call but instead continued laying the foundation for his famed television show that aired for 33 years.

Fred Rogers was ordained in 1963 by the Presbytery of Pittsburgh at Third Presbyterian Church with the unusual charge to do his ministry with children and their families through the mass media. While he never served in the traditional role of pastor of a brick-and-mortar church, his ministry to children reached millions of children and adults.

The Presbyterian Historical Society has information here on Fred in learning about his first television program featuring the piano and puppeteering that became his trademark.

While Fred was a senior at Rollins College in Winter Park, FL, he became “appalled by what were labeled ‘children’s programs’ — pies in faces and slapstick.” As Rogers later told Eva Stimson, editor of Presbyterians Today, “That’s when I decided to go into television… Children deserved better.” More here.

After Fred McFeely Rogers, better known as Mr. Rogers, graduated from college in 1951, receiving a B.A. in Music Composition, he began working in television, at first for NBC and later for WQED, which was a Pittsburgh public TV station that was the U.S.’s first community supported TV station. More about his start in television here. 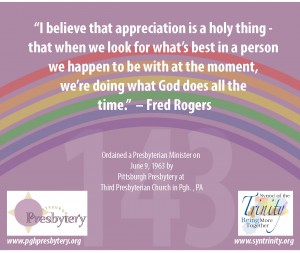 Recently, who would have guessed that a documentary about Fred would become a top 10 box office hit of the summer? So why Mister Rogers, and why now? Read more about the documentary here.

During the heyday of PBS’s “Mr. Roger’s Neighborhood” even a lot of Presbyterians did not know that the mild-spoken host of the popular PBS children’s program was a clergyman, indeed, no doubt the most famous living Presbyterian in all the world. The Presbyterian Outlook previews the documentary here.

Morgan Neville’s new documentary about Fred Rogers, “Won’t You Be My Neighbor?,” reminds us that the television icon was an ordained minister … and then shows us protesters at his funeral predicting his damnation. It tells us that he was a lifelong Republican … and then shows conservative pundits roundly condemning him for helping create an environment where children’s self-esteem was respected and nurtured. Read a review of the documentary here.

George Wirth is a pastor within the Presbyterian Church (U.S.A.) who met Fred in 1983, and the two quickly became close friends. Wirth would visit the set to watch the filming. He and his wife went on trips with Rogers and his wife. And from 1990 until Rogers’ death in 2003, the two men talked on the phone every Saturday night at 9 o’clock. Read five things that Fred wants us to learn about his friend here.

“You rarely have time for everything you want in this life, so you need to make choices. And hopefully your choices can come from a deep sense of who you are.” Fred Rogers

Nobody rocked a cardigan sweater better than Fred Rogers. The beloved Presbyterian pastor hosted the nationally syndicated TV show Mr. Rogers’ Neighborhood for 33 years on PBS. He began each episode by changing into his sneakers and putting on a cardigan before teaching children lessons of unconditional love and empathy as he interacted with his neighbors. Read about a sweater drive that is named in his honor here. 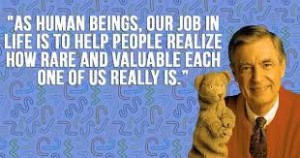 For the Rev. Dr. Fred McFeely Rogers (1928-2003), every day started with welcoming his neighbor. Fifty years ago, he launched a creative and enduring ministry anchored in Pittsburgh by reaching around the world: Mister Rogers’ Neighborhood. As creator of this longest-running program on public television, Fred walked into the studio each day saying, “Dear God, let some word that is heard be Yours.” And through his more than 900 episodes of the internationally acclaimed children’s program and his more than 200 songs, he communicated the love of God through his always-gentle manner and ever-reassuring words. Read how his legacy continues to live on at Pittsburgh Theological Seminary here.

Americans seem to love sharing myths about Fred Rogers, the friendly neighbor known the world over as Mister Rogers. Consider the one about how he wore cardigans to cover up his tattoos (false). Or the one about how he was an ordained Presbyterian minister. That one is true — he graduated from Pittsburgh Theological Seminary in 1963 — and it’s far more foundational to Rogers’ legacy than you might think. Rogers was a man defined by his Christian faith, and the message that he taught every day on his beloved children’s show was shaped by it. “If Protestants had saints,” Jonathan Merritt wrote at the Atlantic, “Mister Rogers might already have been canonized.” Read about Fred’s radical but gentle faith here.

As it happens, we are being reminded of him in the year of the “separation of families.” His gentle, loving, always respectful relationship to children is suddenly perceived in stark contrast to the government’s heart-breaking policy of taking children from their parents and placing them in anonymous institutional settings without any guarantee of their being reunited with their mothers or fathers. An article in the Presbyterian Outlook looks back on an interview with Fred here.