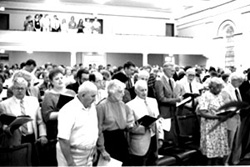 Synod meeting in the early 1990s

Presbyterians were present in significant numbers in the American colonies in the 17th century, served by pastors from Scotland and Ireland. Exhibiting a tendency (compulsion?) to organize, they established a General Presbytery in Philadelphia as its first governing body in 1706. As growth continued, they saw the need for a multi-level governing structure. In 1717, the first “synod” was created, also in Philadelphia, with administrative/governance responsibilities for three presbyteries.

Expansion continued, along with division and reunion, and in 1789, a larger governing entity was created, and the first Presbyterian Church General Assembly met. Since that time synods had been referred to as “middle governing bodies,” although their specific responsibilities have changed continuously and varied from region to region. 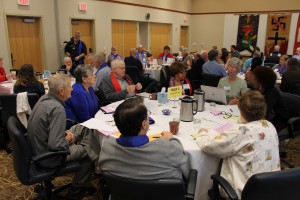 The Synod today covers all of Pennsylvania, all of West Virginia except for the eastern panhandle, and the counties of eastern Ohio (with West Virginia’s northern panhandle) generally known as the Upper Ohio Valley.

Local proximity issues have also resulted in congregations in New York and Maryland being included in the synod’s numbers. Our current 16 presbyteries make up the Synod of the Trinity, and these “mid council offices” serve 1,033 churches and 126,756 Presbyterians, making the Synod of the Trinity not only the oldest but also one of the largest in the Presbyterian Church (U.S.A.).

For more about the history of the Presbyterian Church (U.S.A.), visit its website.