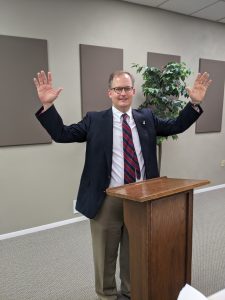 How does a Bachelor of Science in Commerce degree turn into an executive presbyter call? It’s a fairly simple transition, if you ask the Rev. Dr. Tom Harmon. That’s the path the new EP at Beaver-Butler Presbytery has taken, with a couple congregational stops in between.

Tom began as Beaver-Butler’s executive presbyter on Feb. 15, taking over for David Oyler, who served in an interim role with the presbytery for nearly two-and-a-half years while also leading the Presbytery of Lake Erie. Prior to that, Alan Adams held the post for 14 years before retiring in 2018.

“I have always had a sense that at some point in ministry I would do something at the mid council level,” Tom said. “This opportunity became a good time and a good fit in my sense of calling. As long as I’ve been in ordained ministry and serving the church, that role of congregational ministry has always, for me, had a connection to presbytery leadership. I’m really passionate about how congregations can work with each other to grow and build the kingdom of God.”

Tom is no stranger to the presbytery, having served as the pastor at Westminster United Presbyterian Church in Evans City, PA, (Butler County) for seven years while also being the presbytery’s moderator and vice moderator during that time. That came after another seven-year call at the First Presbyterian Church in Fairborn, OH, a suburb of Dayton.

Serving the church first came into Tom’s view when he was at the University of Virginia studying business. Despite a successful internship working with the director of operations at a local grocery store, Tom could sense that it wasn’t the direction he was being called. A cradle Presbyterian, Tom decided to take some religion classes alongside his business courses. He ended up doing some shadowing in a church and later built a website for the Presbytery of the James in Richmond, VA.

“That really expanded my understanding of the Presbyterian Church,” Tom said of his time at the nearby presbytery. “Growing up in a congregation that wasn’t overly connected, I immediately got to see all the ways that congregations were connecting with each other and what the presbytery was doing.”

When General Presbyter/Stated Clerk Carson Rhyne saw Tom’s enthusiasm and learned that Tom was considering going to seminary after college, he showed Tom the ropes, taking him to meetings and even a few churches to give him a better understanding of what mid council work was like.

“I ended up finishing the business degree but really having a deep sense that God was calling me to seminary,” Tom recalled. “I also didn’t think that call to seminary meant that I would go to congregational ministry. I did some work on Capitol Hill with lobbyists, thought I might do public policy, something more administratively based. Seminary gave me the ability to really feel called to the congregation.”

It led to his first call near Dayton where he also became integrated in the Presbytery of Miami Valley and was made a member of its council. He would eventually move to Westminster Church in Butler County and quickly became connected to Beaver-Butler Presbytery. And when the executive presbyter position became available, he couldn’t pass up the opportunity to apply.

“I started out in business, God called me to ministry, and this is an opportunity that I’m continuing to use some of those gifts for administration,” Tom said. “I always had a sense that at some point in ministry I would do something at the mid council level. This opportunity became a good time and a good fit in my sense of calling.

“As long as I’ve been in ordained ministry and serving the church, that role of congregational ministry has always, for me, wanted it to have a connection to presbytery leadership. I’m really passionate about how congregations can work with each other to grow and build the kingdom of God.”

Tom is stepping into a good position at Beaver-Butler, thanks to the efforts of David Oyler and Alan Adams before him. The coronavirus pandemic is a hurdle that still needs cleared, but overall Tom is excited about what lies ahead for him and the region.

“We have really turned the corner from some conflicted conversations in the past to a new sense of collegiality,” he said. “There’s a good spirit here. This office is able to equip churches to become a catalyst that helps our congregations grow an awareness of God’s covenantal life. My hope is that we can become a catalyst to help our congregations see that the presbytery isn’t just an office or a person but really is 63 congregations, 6,692 Presbyterians who join together in our mission and ministry.”

The togetherness of Beaver-Butler’s congregations, Tom hopes, will lead to a new energy and ideas that will form relationships that will help them grow into one and allow them to partner in collaborative work. Because of Tom’s already established connections within the presbytery, he is ready to hit the ground running when it comes to meeting people and helping congregations form these bonds.

“One of the most critical things is having the ability to meet people – to know them, to be known and to grow and trust together,” he said. “One of the really successful things that Alan Adams did when he was in this position was that he got to know folks in the congregation. Not just the pastors, but folks on session and different leaders in the churches. Luckily, I know some of the terrain already, but there is always the ability to grow and deepen those relationships.”

If people in Beaver-Butler don’t know Tom, they certainly know his in-laws. Gary and Judy Angleberger moved into the presbytery in the early 1980s and have been very active in Presbyterian circles within the region and larger church. They have seen plenty of changes occurring in the church during their time in this area, but probably none bigger than the current coronavirus pandemic that has changed the way many congregations “do church.” It’s a challenge that Tom is ready to tackle.

“For the church, it’s a totally new time,” he said. “How do we become a church that is coming out of a pandemic? This is new territory for us. Fortunately or unfortunately, things will not go back to the way that they were.

“We have to be a church that is adapting to a post-pandemic reality. It’s going to take a lot of skill, innovation and adaptations. There are no bad ideas right now. And of course everyone’s exhausted. I’m hoping, with God’s help, that the work of the Holy Spirit will allow us to gain the energy and courage to move forward. It’s a wide-open landscape right now, and that’s both incredibly scary and full of opportunities.”

The changing landscape makes for a challenging time for anyone stepping into a new call, but with Tom’s passion and knowledge of his constituents, he’s suited to help lead Beaver-Butler into the next phase.

“I’ve had a commitment to presbytery leadership throughout my role as a church pastor,” he said. “I had a general idea that this may be a place where God will call me in time. It’s interesting how God has a way of continuing to develop my role and call in ministry even in spite of the ways that I think about them.

“I have a deep love for the churches that are here, and I really want them to succeed in the ways that God is calling them.”