Sometimes, a person doesn’t realize a “God moment” until days or even weeks after the event has occurred. But for the Rev. Ken Wonderland, there was no mistaking what was taking place at his Bensalem Presbyterian Church a couple of years ago. 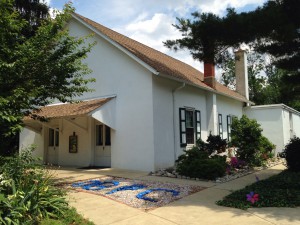 Bensalem Presbyterian Church hosts a monthly meal for the needy thanks to the help of a neighboring Jewish congregation.

He was approached by a woman in the congregation, Mission Chairperson Ellen Suchniak, about helping with “Shared Meals,” a community-wide program that serves a meal to the needy and homeless of Lower Bucks County. At the time, only about 18 locations were booked monthly to host the meals and Ellen asked Ken about helping to fill one of the vacant days. As Ken considered the logistics of how this could work and waited for a recommendation to be made to his church’s session, something amazing happened.

Just two days later, the Jewish congregation across the street from Bensalem PC – Congregation Tifereth Israel – called Ken to ask if his church would be interested in joining with them to fill one of the days for the “Shared Meals” program, the same conversation Ken had had with Ellen earlier in the week.

“My heart burst. My eyes teared up and I just had a smile from ear to ear,” Ken recalled. “I said, ‘I can’t believe you just did that!’ I said, ‘We just had the same idea. This is great!’

“Our Leaders were hesitant because we weren’t sure we had enough people to back it up, so when we got a call from across the street straight from the congregation I said, ‘We have no excuses now.’ If that’s not a spiritual moving at an opportunity to be grasped, I don’t know what would be.”

While Bensalem PC was slightly lacking in volunteers to help make this work, the Jewish congregation also had a good reason to ask its neighbors for a helping hand.

“Because of their Jewish kosher laws,” Ken said, “they can’t prepare meat and serve it to non-temple people in the temple. They wanted to know if we would be willing to partner with them, or could they use our facility. And I said, ‘We just talked about this. Do you wanna get together and talk about this as something we could do together?’”

For the past two years, Bensalem PC has been hosting a monthly “Shared Meals” supper on the second Thursday of the month. (Bensalem has also stepped up and hosted a meal on the fifth weekday in a month when that occurs.) On their designated night, the people from Bensalem PC host and prepare the main dish (normally chicken) and the Sisterhood from Tifereth Israel makes the desserts, side dishes and salads.

While many of the people walk to the meals, which now covers 28 days a month, the local Advocates for Homeless and Those in Need provides a mini-bus that picks up several of the needy and transports them to the locations where the food is served, a service called “Wheels to Meals.” At Bensalem PC, it started out with between 20 and 30 people attending but has grown steadily to where there are now in excess of 50 people turning out. Ken thinks the interaction between the volunteers has been a big reason for the increase in attendance.

“Our ladies, particularly the Sisterhood, spend time talking to everybody who comes in,” Ken said. “Here’s the key: they treat them as guests. That is their calling as serving as a welcome host. As hostesses, they sit down and talk to everybody. Our people are a little different. We’re nervous about getting the meal out on time and getting it right. They are very concerned about making the guests feel welcome.”

The “Shared Meals” cooperative between Bensalem PC and the adjacent Jewish congregation is just the latest in a long relationship between the two congregations. They have also shared Bible studies and holiday services to form a bond that continues to strengthen.

“We’ve had a cooperative, reciprocal, friendly relationship with them for at least 20 years,” Ken estimated. “And friendly means we get together on Thanksgiving eve and we go back and forth where we have the service and who leads it. We share in Bible studies. Their Rabbi, Jeff Schnitzer, has been very giving in terms of teaching us Old Testament scholarship and lessons. There’s nothing like a Jewish Rabbi giving Old Testament history to the Gentiles, to the Christians. We just don’t learn it the same way.”

Both Bensalem PC and Tifereth Israel congregations have about 65 worshipers on a given Sabboth, and when they combine for a service it is usually held in the Jewish temple. The relationship between the two congregations has flourished to the point that they both share in each other’s joys and sorrows.

“We know each other by name. We know family histories,” Ken said. “We have tears and sharing when we lose somebody. The relationship has grown in that we’re a little involved in each other’s lives.”

Despite the differences in theology, a strong relationship has obviously grown between these two neighboring congregations. And the community is benefiting in a big way.

“We do acknowledge our differences and we are very respectful and honor and observe them with each other,” Ken said. “But we also allow ourselves to come together, which I appreciate.”