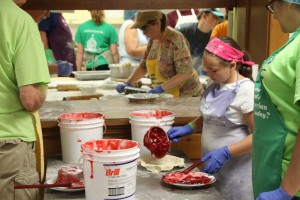 A youth from First Presbyterian Church of North East, PA, drops cherry pie filling into a crust. This year’s baking project raised $8,000 for the church’s Presbyterian Women’s group, which distributes the funds to the church and the community.

This annual tradition of baking at the First Presbyterian Church of North East, PA, (located in Erie County) generates in the neighborhood of $8,000 in profit that goes toward everything from its youth mission trips to purchasing eggs for its food pantry to supporting refugees in Erie.

“It’s a fun time,” said Billie Blosser, who is the chairperson for the Presbyterian Women’s group at the church that organizes the cherry pie sale. “People seem to enjoy doing it. We have a special young woman, Ashley Connors, who coordinates all facets of our yearly endeavor.

“We have such a great community of helpers. We have men working with us every day, we have young people working with us and, of course, we old ladies – and younger ones, too.”

Occurring every year in July since 1979 in conjunction with the North East Firemen’s Cherry Festival, the congregation molds 200 pies each morning of the festival, Monday through Friday, in their church kitchen, then bakes them in the afternoon so that they’re fresh in their stand that evening. They sell for $10 apiece, which is slightly cheaper than other stands at the festival but also assures themselves that they are sold out by the end of the week.

“Some of the other churches and firemen sell them for more, and they have a crumb top; ours have a lattice top,” Billie remarked. “We kept it at $10 because then the pies are all gone and everybody can afford a pie. We sell out, we have a good profit and every year we spend all of it in mission.” 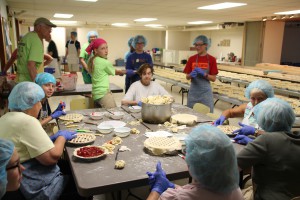 Volunteers turn out to help create, bake and sell the pies for the First Church of North East.

First Church got involved nearly 40 years ago when the town’s Chamber of Commerce asked the congregation to make cherry pies for it for the festival. The church’s Presbyterian Women’s group agreed to spearhead the baking project, resulting in 276 pies that sold for $6 each. At the time, cherries were donated from church members who had cherry farms and the chamber paid for the other ingredients. With the chamber receiving the profits from the sale of the pies, First Church generated less than $100 for all of its work that first year.

Each year, the amount of pies that were made during that week increased. By 1995, the Chamber decided to stop selling the pies, but the PW group saw the foundation that had been laid and the potential revenue that was there and began making pies for its own benefit. That year the PW dedicated $1.50 per pie sold to help cover the cost of youth from their church attend camp. In the years to come, that fund grew large, so the PW decided to go in a different direction and send the profits toward other dedicated missions.

This year, money from the pie sales were divvied out into several different pots, including supporting the Presbytery of Lake Erie’s partnership with a sister church in Northern Ghana.

“There is a big need for a clinic there,” Billie said. “The one that was there fell into ruins.”

Also receiving a cut is the national Presbyterian Women’s organization, money that is used to support grants the group gives out. Individuals from the community with large medical expenses have also benefited from the profits of the cherry pie sales.

Nearly $2,000 was also set aside for tuition to a deserving child who attends the church’s preschool. Money collected throughout the years has also been earmarked to assist the school if a special situation arises. 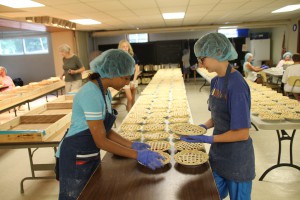 Roughly 200 pies are made each day, then sold as part of the North East Firemen’s Cherry Festival.

“We have a preschool in our church and we have established that we give a full scholarship to a 5-year-old every year,” Billie said. “And when the preschool has any financial problems with a family that cannot meet their requirements, we work with them and subsidize them so the child does not have to go without. We feel it’s very important, especially at age 5, that they have that year of preschool before entering kindergarten.”

By organizing a group of 25-30 volunteers daily to make, bake and sell the pies to generate funds for worthwhile community programs, it instills a great sense of connectedness for all who are involved.

“If you have an opportunity to do something like this with a festival or something in your community, it’s certainly worthwhile,” Billie said. “It’s great fun for the congregation. And it helps the young people to begin to volunteer for something beyond themselves.

“We have been so richly blessed to have this wonderful method by which we can earn a great deal of money that we give away all except for what we need to make pies the next year. We believe that if we are faithful – he’s allowed us to have this harvest of money – we should be doing for the least of these. We don’t invest it and save it for a rainy day. We’re trying to be faithful to his word. If we do what we’re supposed to be doing he will replenish us.”