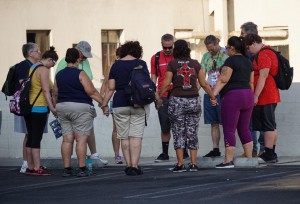 The mission team from Columbia Presbyterian Church pauses for prayer before heading out for a day’s work in Los Angeles.

Columbia, PA, and Los Angeles are 2,600 miles apart. One has a population of 10,000 and is home to the Turkey Hill Experience. The other has nearly 3.9 million people living there and claims nine professional sports teams. Despite their seemingly vast differences, there are some stark similarities between these two areas.

One shared problem is homelessness. Los Angeles has an area called Skid Row where it is legal for thousands of people to live on the streets. For Columbia, it is also dealing with this same situation that’s affecting its community in a number of ways.

Realizing the common threads between the two, the Rev. Dave Powers, the pastor at Columbia Presbyterian Church, decided to organize a mission trip to Los Angeles in the fall of 2016 in order to better understand LA’s struggles and hopefully bring back some useful tools and information to help combat the problem in Columbia.

One of the focal points of the trip was the Dream Center in Los Angeles, which is an outreach in a former hospital building called “Queen of the Angels” in Echo Park that caters to up to 500 people. The Dream Center ministers to, among others, gang members, drug addicts, unwed mothers and children without parents, motorcycle groups, AIDS victims, and various ethnic groups.

“There’s a lot of brokenness in our community,” Dave said. “I wanted to just show them (members of his congregation) large scale how this really works and how the Dream Center has built this amazing ministry that touches a city that’s that size.” 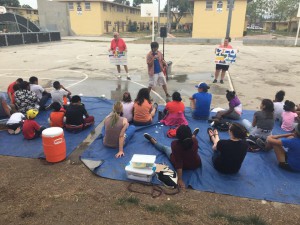 Members of the Columbia PC ‘Dream Team’ lead a sidewalk Bible school for homeless in L.A.

Dave had been to Los Angeles by himself on two occasions before he took 11 others from Columbia PC, called the “Dream Team,” to the West Coast in September. The week-long trip was made possible thanks in part to a $1,200 Synod of the Trinity Mission Travel Grant (formerly part of the Peacemaking Grant process). Found out more about the Mission Travel Grant here.

“The purpose of the trip was to show what we do here on a very large scale,” he said. “So, going out to the Dream Center was just to kind of give everybody the very surreal experience of serving in a town like Los Angeles.”

Those duties included working with a food truck ministry that delivers food to the needy areas of the city, volunteering for a foster care intervention program that helps a family maintain a quality living space and helping with a sidewalk Sunday school in depressed neighborhoods one afternoon. Time was also spent in Skid Row, ministering to the homeless while handing out hot dogs, toiletries and bottles of water.

“And we did a lot of praying,” Dave added. “Skid Row is an unreal place. Skid Row is the only place in L.A. where it is actually legal to be homeless. It’s an area that comprises 54 city blocks. It is massive homelessness. People are living on the sidewalks, in tarps. Plus there are homeless people living in every park and under every freeway overpass in L.A.

“I wanted everybody to be exposed to that, that the idea of responding to God’s grace, responding to what Jesus called us to do and living it out and helping those folks, to me that’s what the church is called to do and that’s how we do ministry. I wanted people to experience that on a much larger scale than what we already do here in Columbia.”

The effects of the mission trip have had a positive effect on not only those who went to Los Angeles but also many others in the church.

“I have more people involved here in what’s going on,” Dave admitted. “I have a deacon who went with us out there who has come to believe that her whole mission is helping homeless people now and people especially who are caught up in addiction. That person lit up in Los Angeles. 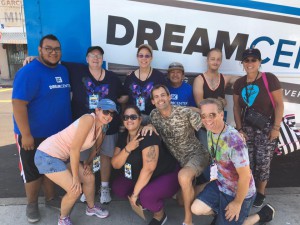 “An elder on session never understood parts of the whole need to outreach to people as a way of working out her salvation with fear and trembling. I have another elder on session who felt the same way, thought the Presbyterian Churches were for rich, white people. I mentioned that rich people are supposed to help people who can’t help themselves. When we got out to L.A. this elder said to me, ‘I don’t get why we’re here.’ I said, ‘Check back with me in three or four days.’ And she came to me at the end of the week with tears in her eyes and said, ‘I get it now.’”

Dave and two others will be heading back to Los Angeles this year, something Dave does to rejuvenate himself.

“It’s my spiritual home,” he said of Los Angeles. “My heart lives out there. My heart’s here to serve, it’s where I’m called to serve here in Columbia and I feel absolutely called to be here, but sometimes when my spiritual batteries need recharged I get that recharging in Los Angeles.”

Dave hopes to take a full mission team back to the Left Coast in 2018.

“My treat this whole trip was to watch the impact on other people,” Dave said. “And I think it was in two different places. One was in helping the children in the projects. The other was watching people interact with the homeless on Skid Row. We prayed over every seat in Angelus Temple.”

Angelus Temple is a megachurch in Echo Park that was founded in 1923 by Aimee Semple McPherson, who has been an inspiration to Dave. He admits that God brought Aimee’s story to him and put her in his heart, thus creating a passion in Dave for the volunteer need in Los Angeles, which his own community in Columbia can draw similarities from.

“God showed me how great the need is, how big the world is and how much everybody needs God,” Dave said. “I think God showed me that not only can we minister to God and live out our salvation and live out our faith by helping people, but we also get helped by the people we serve. Just to see gratitude on people’s faces, receiving hugs from kids that live in projects and homeless people who live on a sidewalk, to me I see God in that all the time.

“It is amazing to just be able to sit down with a homeless person who lives on a park bench in Venice Beach and have them tell you their story. I also see God’s hand in the changes that happen with people who became different people when they came back from there.”