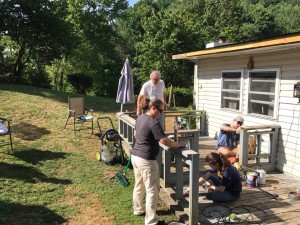 In July of 2017, a group of a dozen worshipers from Concord Presbyterian Church in West Sunbury, PA, traveled to the community of Mabscott, WV, for a week of community service that centered around repairing houses. The Rev. Bob Edmundson led the group, which received a $2,000 Mission Travel Grant from the Synod of the Trinity to help defray expenses for the trip. “It truly was the donation that made the trip possible for the church,” Bob said of the grant.

What follows is Bob’s written account of the experience:

“The 2017 Concord Presbyterian Church mission trip worked with an ecumenical organization called ‘Team Effort.’ Our project for the week involved roof repair, drywall repair as a result of a leaking roof and repair of a wooden deck that had rotting boards. We worked alongside another group from New Jersey and enjoyed getting to know them as well as working with them.

“Work each day began with devotions and each day ended with an hour-long worship time. Miss Barbara, the homeowner, was so very gracious as the team worked on her house. Many of the people sat and talked with her and shared their faith as well as she to them. Miss Barbara had worked as a cook and was a widow of several years and did not have the ability to fix her house up, so it helped her greatly.

“The young people within our group had their opportunity to see life from a different point of view, especially those who did the roofing. Ministry/missions became something that they could do. There was much emphasis placed during the week on teenage participation and not just completing a task. In certain terms, the journey was as important as the destination. Each and every person was involved in the various aspects of the work.”

In answering the question, “If you were to take this work to a next step, what would that look like?” Bob replied, “As poverty is so pervasive in the area, I would think of fundraising for the area so others could be helped. On the church side of it, I would encourage the young people to dream bigger dreams as to how they can share the gospel of Jesus Christ in action. Likewise realize that there are those around us who need help in so many ways in which any and all of us could be involved.”