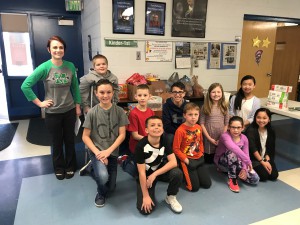 Since 2011, Eleanor Presbyterian Church in West Virginia has been delivering food-filled snack bags to nearby George Washington Elementary School. They are passed out to some 40 students so that they will have food for the weekends during the school year.

The program was such a hit and had such an impact on the community that in 2017 the children in the school decided to take it to another level. They formed a food drive to help supply items for the snack bags, and in that first year collected over 4,100 items that weighed nearly 1,000 pounds. Since Eleanor Church was purchasing most of the items for the snack bags, this was a much-appreciated contribution to the program.

“We’re a very small church (less than 20 members),” said Debbie Yeager, the wife of Eleanor Church pastor John Yeager and one of the coordinators of the backpack program. “We rely on our members to donate, and I also apply for grants.”

The food drive, organized by the Lighthouse Team at the school, also brought some new energy to the students and the school.

“This is totally kid-driven,” Debbie said. “It’s kids helping kids. One little kid who is on this team told me, ‘You know, we may be small, but we have huge hearts.’ I was very impressed with that.

“They’re coming up with this. They know kids are hungry and it’s still a problem everywhere. They wanted to do this. That says something about the kids, that they care, that they’re thinking about hunger. They know in the classroom who doesn’t have as much as the others.”

With a second food drive slated for early March this year, a well-publicized teachers’ strike in the school district lasted nine days and coincided with the two-week food drive. With children not in school, it seemed unlikely that the food drive would generate any goods for the snack bags. However, when the children returned, they brought with them close to 500 items (nearly 200 pounds) to make sure they did their part again to assist in a program that supports their classmates.

“They still brought it in; they were still excited,” Debbie said of the students. “We were thrilled to get it.

“The strike did have an effect, but they didn’t quit, they didn’t stop. They still brought stuff in. I’m very proud of them.” 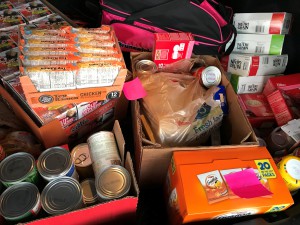 A teachers’ strike didn’t deter the students and faculty from supporting Eleanor Presbyterian Church’s snack bag program with a food drive in March.

The snack bag program supplies students with two breakfasts, lunches and dinners as well as healthy snacks. A local greenhouse has been providing fresh apples for the whole year, Wal-Mart has supplied some funding and the Presbytery of West Virginia has also stepped up to help with costs.

“We’re working with the community to keep this going,” Debbie added. “We’re very, very proud of it that we’re able to feed them.”

Because Eleanor Church is the only local congregation involved with the backpack program for this school, Debbie is planning to reach out to other area churches this summer to see if any of them would be willing to partner with them for the next school year.

With only five people from Eleanor Church helping with the snack bag program, having more support would be another answered prayer for this program that is flourishing regardless of any obstacle that comes its way.

“I see a lot of love coming out of this, especially with the kids,” Debbie said. “But it’s also teachers. Everybody is helping each other. There’s a lot of love through that, and a lot of blessing. It seems whenever we need something, it always comes through. It’s always there.

“God has a big part in that. He’s in charge. If we just turn it over to God, and just pray about it, something always comes through for us.”