Garden of Edin growing nourishment for body and spirit 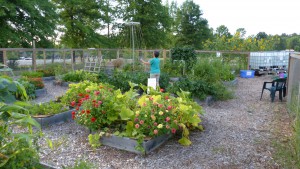 The Garden of Edin, located on the property of First United Presbyterian Church in Edinboro, PA, supplies food for the community in a variety of ways.

The Garden of Eden, as depicted in Genesis, is a tranquil place with abundant growth that provides food and shade for those who gather there. The Garden of Edin, located at First United Presbyterian Church in Edinboro, already has many of those same qualities, making it a place like no other in this far northwestern Pennsylvania town.

The Garden of Edin (pronounced like the biblical garden “E-den,” not like the beginning of the town “Ed-in” where it resides, which is commonly mispronounced “E-den-boro”) begins its fourth season of providing for the community in 2018 by offering 80 raised beds. Half of them are 4×8-foot spaces, while the other half are 1×6 feet that line up along the fence to allow for vine-like produce to grow.

New this year is a Meditation Garden that is located near the beds so those who are cultivating their areas have a quiet place to reflect on their work while also engaging in conversations about food, family and faith with other gardeners. It results in a one-of-a-kind space that serves many purposes.

“This garden is different because of its relationship to our church, to a house of faith,” said Heather Zimmerman, the manager of the Garden of Edin. “Many community gardens are on city land, and I think our gardeners realize there is a different feeling. It’s very calming and quiet. People who had never been to our church are now coming for a different reason completely, but they sense that difference.”

Heather, for one, has been specifically touched by the creation of the Garden of Edin, which received funding along the way from a Presbytery of Lake Erie Bold New Initiative Grant. She hopes that others will be affected in the same way she has.

“I felt a definite call to this,” she said. “This is about food. Jesus said, ‘Feed my people, feed my sheep.’ We are inviting people onto our property, into our sacred ground, and it really touched me.” 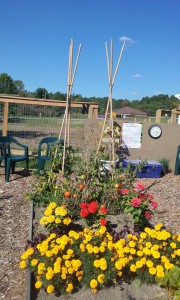 Anything from flowers to tomatoes can be grown in the Garden of Edin.

The idea for a garden at First United Church came in 2013 when then-pastor Matt Falco challenged the congregation to pick one of three initiatives to try in an attempt to reach out to the community. Gardening was the most well received, so the congregation decided to give it a try. In 1996, the congregation attempted a community garden for three years, but interest was lost in the program and it eventually fell by the wayside. Now, two decades later, the idea of starting a community garden resurfaced and this time plenty of energy surrounded the initiative.

“It really hit a nerve in our church,” Heather recalled. “We had done this before, in ’96, but we tried to do it all ourselves. Each year more and more families dropped out. It just became overwhelming. The sermon’s challenge was to take that and flip it on its head. We don’t do all of the work, we just provide the space for people to come to grow their own food.”

It took a couple of years of planning and research for the garden to take hold. It wasn’t until 2015 that the garden took shape with 20 raised beds. The next year the amount of beds doubled before the current allotment of 40 raised garden beds and 40 raised trellis beds was completed.

“The fee for a seasonal rental is just $10,” Heather continued. “We wanted to have this garden be available to everybody, especially people who really need it. And they grow whatever they want.”

A minimum requirement of the garden is that 10 percent of the beds be used to help supply produce to the local food pantry, which is housed in an old dorm building at Edinboro University. The local Methodist church joins with First United Church to grow and maintain half of those tithed beds. It’s just one of several community partnerships that has grown out of the Garden of Edin. 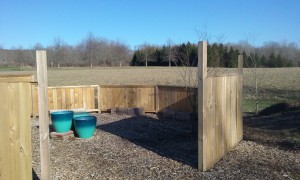 The Serenity Circle will include benches constructed by a local Boy Scout for his Eagle Scout Project.

For instance, graphic arts students at the university created a logo for the garden, a program that the students provide for non-profit agencies in the community. Hermitage House Youth Services, a program for youth with troubled pasts, are providing manual labor for the garden, including a front gate that will include the garden’s logo burned into wood as well as the construction of a Serenity Circle in the Meditation Garden.

“We have two seating areas,” Heather said of the Meditation Garden. “One is a Serenity Circle with various height walls, and a newly-built pergola. We still have to grow the shade on the pergola. We planted three trees to shade the Serenity Circle on Earth Day. A local Boy Scout has chosen the Garden of Edin for his Eagle Scout Project; he’s building benches for both of these locations.”

The garden is located just east of the First United Church building, which sits on a 10-acre lot. Five of those acres are designated for the Garden of Edin, which because of its proximity to the church adds another layer of connectedness to those who garden there. It provides the proper setting for a garden that includes its own area to sit, reflect and contemplate more than just what is being grown.

“Our mission statement,” Heather said, “is ‘The Garden of Edin Community Garden provides a place for gardening education, community gathering and sharing, and nourishment for both body and spirit.’ It’s a place to gather, share stories, form communities, form friendships and nourish your spirit. In the Garden of Edin, I personally have had some amazing conversations about faith, about low points in people’s lives, about high points. I hope our garden makes these kinds of conversations possible for all.”