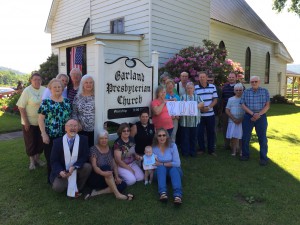 The congregation at Garland Presbyterian Church is celebrating its 200th birthday in June of 2017.

Tim Olsen knew from the first time he stood in front of the congregation at Garland Presbyterian Church that there was something special there. While the northwestern Pennsylvania church didn’t offer the attendance numbers some other congregations might, it certainly wasn’t lacking in energy and morale.

“The very first thing that struck me when I came here to preach the first time was that these people are all engaged, they’re all active,” the commissioned pastor said. “They’re good tithers, too. We’ve never been in want for anything financial. We have been in the black ever since I got here (in 2011), and before that they were in the black. We are financially sound – no debts. And I think that speaks highly of the faithfulness of the stewardship of the people over the years.

“When I came here to candidate, it didn’t take us (Tim and his wife) long to pick up on that – the Holy Spirit working in this congregation. They all love the Lord, they are hard workers, they’re willing and I think that’s played a huge part.”

It’s this type of commitment that has kept Garland Church around for 200 years, an anniversary the congregation – and the surrounding community – are celebrating this summer. Started on Jan. 30, 1817, with a worship service by Amos Chase at the home of James White, Garland Church has survived wars and attrition to become the last-standing church in Garland, outlasting Catholic and Methodist congregations that also called the town their home over the years.

Garland Church’s average attendance on Sunday mornings is about 24, but a decade ago that figure had been reduced to 8-10. There were questions as to whether the church should close its doors, but after a meeting with the Presbytery of Lake Erie, the congregation was persuaded to push forward.

“Garland used to be a busy, thriving place,” Tim said. “There was a furniture industry, lots of woodworking, it had its little storefront buildings up and down the main street. But most all of that has disappeared. Being part of the Rust Belt, it really started to go south with younger-generation people moving away to find work. It really was a detriment to the churches in the area.

“Through discussions with David Oyler, general presbyter up in Lake Erie Presbytery, they worked with them and the elders kept the doors open. They refused to close and kept it going.”

The anniversary celebration will begin on Friday, June 16, with a kickoff that will include re-enactors performing in period clothing as well as church members wearing outfits from that 1817 era. A female barbershop quartet will also perform, and a Chinese auction will begin that will run throughout the week, with the winners receiving donated items like homemade pies, cords of wood and hardware. An open house, hymn sing with a scrub band, bagpipers and an outside service in the church’s new pavilion will also be included in the weeklong festivities that wrap up June 25.

View a list of the congregation’s anniversary celebration activities here.

“We’re going to do some history introduction to the anniversary,” Tim said. “What was it like living in this area in the early 1800s? What was their livelihood? There were mountain lions, panthers and elk in the area. Most people were farmers or engaged in some sort of community support to that activity – blacksmiths, gristmill operators, lumbermen, metal workers.” 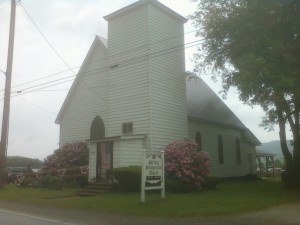 The current Garland Church building has been the congregation’s home since 1872.

After that initial service in 1817, the congregation continued to meet in houses, barns and the Blue-Eye Schoolhouse for 23 years before a church was constructed. That building remained the home of the church until 1872 when a larger space was needed and the current structure was erected. Tim estimated, based on some old pictures, that the membership of the church grew to its highest point of around 100 after the turn of the century.

Known originally as “The Church of the Mullen-Gar” and eventually nicknamed “Church of the Brokenstraw Valley” because of its proximity to Brokenstraw Creek, the worshipers of Garland Church continue to support one another in the area.

“They have served this farming community; that’s their legacy,” Tim said. “The people today in the area, not necessarily do they come to the services on a regular basis, but the whole community sees this as their church. Whether they attend or not, this church is an icon and has been all of these years. People identify with it.”

It has resulted in a community-oriented congregation with a spirit that hasn’t been lost on anyone in Garland, including the Presbytery of Lake Erie’s general presbyter, who may have summed it up best.

“(David Oyler) led our worship service a couple months ago and said that the hand of the Holy Spirit was on this church,” Tim recalled. “He could sense it through the people. We may not have the largest attendance on a Sunday morning or the largest membership on the roles, but the people that do come and the people that are on the roles are usually active. They don’t sit back and just do nothing. They come, they’re active and they serve.

“We’re a humble, small church. We may have 24 people in attendance on a Sunday morning but they’ve hung in there for 200 years, which I think is phenomenal. We’re still percolating. The good Lord’s not done with us yet.”