Rev. Don Aull stands in the parking lot at Mount Jackson Presbyterian Church in New Castle, PA, during a “Parking Lot Prayer and Praise” service on a recent Thursday afternoon.

These days, every congregation is looking for the best way to stay connected with its worshipers. The spread of the coronavirus has caused church leaders to use everything from the telephone to YouTube to be able to remain in contact with its church community. For the Rev. Don Aull, all he needs is a radio transmitter and a parking lot.

During three different time slots on Thursdays, Don leads a “Parking Lot Prayer and Praise” at Mount Jackson Presbyterian Church in New Castle, PA. Lasting for about 30 minutes, the gathering consists of the reading of a psalm, devotions, singing and, of course, prayer. Through two weeks of experimentation, the outdoor services for the small church in Shenango Presbytery have drawn more than 30 cars and nearly 50 people in a day’s time, which nearly matches Mount Jackson Church’s weekly Sunday morning attendance.

“I’m feeling good about it,” Don said, “particularly because we’re reaching some of the non-members. It’s a good, healthy sign of spreading the gospel. The sheer fact is that we’re trying to encourage people, giving them a link to the Lord, a link to one another.” 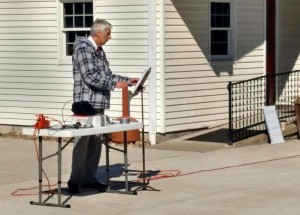 When the mandates from the Centers for Disease Control and Prevention originally came out, they urged that groups should be limited to 10 or less people. Don wanted to hold some kind of prayer group at different times during the week as the coronavirus began making its way into the country and figured he could do that in the sanctuary by following the proper social distancing guidelines. However, there were concerns that the virus could spread through the air, and this question caused Don to reconsider his plan and figure out a way to move the gatherings outside.

Don decided to use a public address system the first week to project his voice to the cars, but by week 2 a radio transmitter was purchased that now allows for the cars to tune to a select FM station to hear Don’s message and participate in the service.

The service times are 11 a.m., 2 p.m. and 6:30 p.m., and through the first two weeks, the first time the afternoon time slot was most attended, and the second week it was the morning half-hour that drew the most cars.

“I did it three times deliberately trying to get people with different schedules,” Don said.” Some folks are more morning people, some are afternoon, and some are still working, so at 6:30 in the evening they can come after their work hours. The evening has been a little slimmer than I thought it might be.

“Every time there’s been three to four cars of people I don’t know. I’m sure they live in the community but who they are I really don’t know. That makes me feel good as a pastor. I told our people that we’re getting the gospel out and spreading encouragement beyond our own flock.”

Don opens with a prayer and the reading of a psalm, which is followed by the singing of two songs. Because even passing papers these days is frowned upon, Don will sing the stanzas of the songs and have those in attendance sing the better-known chorus parts. Following a short, 10-minute devotion, a silent prayer and closing hymn conclude the service.

“I give them some suggested themes to pray for,” Don said. “I ask them to pray for the needs of other nations – we’re not only concerned about ourselves but the whole world is affected. We offer prayers for people who work in nursing homes, doctors, nurses, ambulance drivers… I tell them to pray for the helpers and, of course, to pray for the final containment, the eradication of the virus. We’re asking God to intervene with that. And pray for your own needs, your own family concerns.” 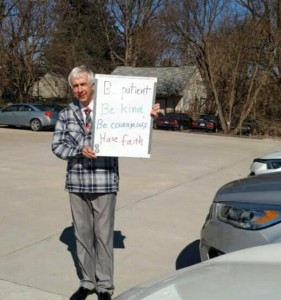 Don chose Thursday as the day to hold the “Parking Lot Prayer and Praise” because letters are being sent out on Mondays to the congregation that include information about the service later in the week, so he wanted to be sure there was enough lead time for the mailings to be delivered.

It also fits nicely with Holy Week, as Don will hold his regular gatherings on Maundy Thursday. The 6:30 p.m. service will include communion as well – since it would coincide with Mount Jackson’s normal Maundy Thursday evening service – with those in their cars urged to bring bread or a cracker and some sort of juice or other liquid to partake of at that time.

Sunday mornings Don has been holding an online service with Nathan Leslie, who is the pastor at nearby Bessemer Presbyterian Church. The service is taped on Saturdays and then shared on Facebook the next day. However, starting with Palm Sunday, Don will be creating his own online service tailored directly for Mount Jackson’s congregation.

It’s all part of an ever-changing time in the world where leaders are seeking new ways to be “the church.”

“God in his own mysterious ways is reaching out to folks who probably haven’t had much contact with the church and so-called organized religion and they’re coming to these services,” Don said. “I assume that’s God reaching out in different ways, touching these folks and getting them linked up with us, even if it’s for a small amount of time.”