For the second time, the Presbyterian Church (U.S.A.) is supporting an idea that is aimed at helping black males thrive in the United States. At the 222nd General Assembly held in Portland in late June, an overture addressing the “Plight of the African American Male” was passed, and people from the Pittsburgh Presbytery who were instrumental in the presentation and writing of this overture were ecstatic with the outcome. 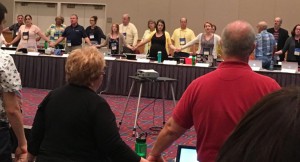 A General Assembly committee stands to sing the doxology following the recommendation of the approval of the Plight of the African American Male overture in Portland on June 22. (Photo courtesy of The Presbyterian Outlook)

“I’m elated that it passed for support in bettering the plight of African-American males,” said the Rev. Eugene “Freedom” Blackwell, who was the advocate for the overture in Portland. “I’m definitely excited that the PCUSA is getting behind these efforts and making a national statement, understanding that this is a national crisis and is willing to engage in that crisis.”

The Rev. Betty Angelini, one of four writers involved in the overture from Pittsburgh Presbytery, agreed that the favorable decision from General Assembly is a huge step forward.

“I’m rejoiced that it was recognized as a concern that needs action,” she said. “Hallelujah for that.”

The vote was unanimous to pass the overture, and following the vote, the room in which the discussion had been held erupted in applause and concluded with the singing of the doxology as everyone held hands. It was a sign of God’s work.

“God’s hand has been all over this,” Betty admitted. “It received a standing ovation after it was voted upon. That is truly the Holy Spirit working on so many of those that have come in contact with it. We are just now in prayerful waiting to come together to discern what the next steps are and how God will continue to have his hand on it. I don’t think that God is done yet.”

Along with Freedom, Sheldon Sorge, General Minister of Pittsburgh Presbytery, was on hand for the vote in Portland.

“I was present during the entire discussion of our overture by the General Assembly’s Mission Coordination Committee,” he said. “We were budgeted for 30 minutes on the docket, but the committee stuck with it for nearly three hours to ensure that there was a workable funding plan in place. Now the work comes back to us, to encourage congregations and members nationwide to contribute to this endeavor.”

The committee that reviewed the overture suggested, among other things, revising the funding aspect of it. The overture calls for five U.S. cities – Pittsburgh, Baltimore, Charlotte, Cleveland and New York – to receive $1 million each to carry out specific actions that will help improve the conditions of black men in those areas. The overture suggested that the funding come from the Hawkins-Buchanan Fund for Racial Justice, which is a PCUSA endowment fund. However, the committee – citing a lack of money in the Hawkins-Buchanan Fund to support the overture – is asking that the money come from the Peace and Global Witness offering and through a special one-time offering.

“In regards to the funding, I agree with the changes,” said Freedom, who is the pastor at House of Manna Faith Community in Homewood, a region of Pittsburgh. “Most of the adverse reaction toward the overture was the asking for money from Presbyterian Mission Agency and knowing that PMA is in a financial bind and there are cutbacks throughout the presbytery. I think it was a very unique idea, a very strategic idea for the committee to recommend that we approach presbyteries, mid councils and individual churches as well as the Presbyterian Foundation to be part of this. For me it ensures our ability to raise the funds for this pilot project.”

Sheldon added, “The Presbyterian Foundation has graciously offered to collect and disburse these funds, in consultation with our five pilot presbyteries. I am in conversation with the executives of the other four presbyteries to be sure that we do this work collaboratively.”

Another request was that the overture focus on more than just African-American males, that women and those in LGBT communities also be included in the wording. However, the overture was not modified to expand it to those groups. Freedom feels that with black males is where the work needs to begin in the hopes that it will eventually expand to women and others down the road. 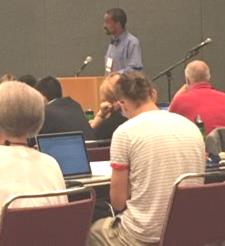 “We’ve gotten to a situation where African-American males today are living at home or are homeless or are living with girlfriends. And with that girlfriend they end up having children, but without the ability to establish a relationship or even understand if that’s the relationship they want to be in because at the time part of the decision is based on survival. We see a disconnect in family as a whole.”

A similar overture was presented and passed at General Assembly in 1990. While congregations, presbyteries and synods were asked to provide financial support to this issue in their areas 26 years ago, actual figures were not recorded at the national level and little impact was felt. Betty is confident that the 2016 overture has more staying power than the one 26 years ago because of the way it was written.

While funding could be a roadblock for this overture, Freedom believes that correcting the path of black males starts with their religious backgrounds.

“The different problems our society face are from a faith standpoint,” Freedom said. “We understand that the core of it is how we know God and how God is expressed through our lives, how Jesus Christ is manifest through our being and we live according to the Holy Spirit. So if we address the matter from a spiritual foundation, giving it a strong foundation, it’s like a spiritual maturation. You have to deal with the core, the sin, the lust, the repentance that’s needed across the nation among all of our people and return ourselves to the Lord. I believe, and I’ve seen, that once we do that, social development, economic development, jobs, a better education, those opportunities arrive. But it must come through the church. It must come through the body of Christ. I believe that with that power of the body of Christ it will make it successful.”

Freedom has seen that happen at House of Manna.

“Over the last couple of years we realized that if we get them first grounded in the Lord that the rest of their social development began to manifest,” he said.

So, during the next several months it will be back to the drawing board for the writing committee to come up with ways to streamline the overture to make it fit with the recommendations approved by the General Assembly.

“Here in Pittsburgh, we’re celebrating the victory together,” Freedom said. “From there we’re going to strategize and put the plan together by working with the other four cities so that we can move forward. … We have been doing some of these efforts in Pittsburgh for some time now. We just really want to combine our efforts and collaborate our opportunities to expand what we’ve been doing across the country through the PCUSA. It’s also a great opportunity to grow the church with African-American men. One thing we want to do is recruit at least 10,000 African-American men, which we hope that 2,500 of them will become members of the PCUSA.”

Regardless of how the overture will finally take shape, things are in place to help improve the worsening plight of the African-American male. And because of that, prayers are being answered.

“God is doing amazing work,” Freedom said. “God loves God’s people so much that he’s put into place this opportunity for growth in the nation and gave us an opportunity to help the least of these, to show compassion, to be an expression of his grace and his love and his redeeming acts.”

“The amount of time given to this overture at GA,” Sheldon added, “together with the eruption of joy and thanksgiving when it was finally ‘perfected,’ signify to me the great ownership our church feels toward this effort. The time is right and ripe for action; God’s people are ready to support this venture, if only we give them the reason and the mechanism to do so.”