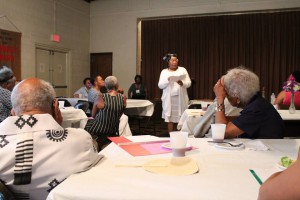 The Rev. Maxine E. Jenkins speaks during the Northeast Regional meeting of the National Black Presbyterian Caucus in Harrisburg, PA, in August.

These four simple words were the focus of the annual Northeast Regional meeting of the National Black Presbyterian Caucus, which was held at Capital Presbyterian Church in Harrisburg, PA, in early August. Aside from passing new by-laws and electing officers, the gathering of respected African-American leaders from the Synod of the Trinity and the Synod of the Northeast regions featured discussions of ways to achieve racial justice, equity and full participation in the Presbyterian Church (U.S.A.).

“We accomplished what we set out to do,” said the Rev. Maxine E. Jenkins, who is the vice-moderator/vice president of the Northeast Region from Pittsburgh.

Rev. Maxine knows that the African-American church is shrinking in this region as well as nationally and that there is no better time than now to work toward re-energizing the people in the pews.

“Our churches, just like all of the rest, are declining,” she said. “There’s no one there to really help until it’s almost too late. We need to be a little more proactive, share resources that will help them to grow. Most of our churches don’t have installed pastors – they’re temporary supply. Most can’t afford to do that (hire installed pastors) because they are maintaining big buildings, paying utilities and loans.

“Those types of things are the issues that we as a caucus, once we get stronger and are more aware, will have to call the national church into accountability. We really need to strengthen our connection with our chapters and our regions so that we can utilize the gifts and skills of all the caucus members.” 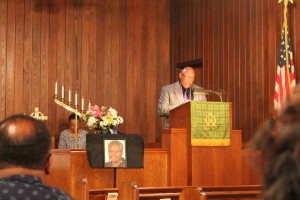 The Rev. Dr. Thomas H. Priest Jr., the president of the National Black Presbyterian Caucus, was one of the special guests on hand and delivered the message during opening worship, challenging those in attendance to become more involved in the church in order to have the black voice heard.

“We are unified in our identity as members of the National Black Presbyterian Caucus who have taken seriously our work to engage issues that adversely affect the lives of people in the church and society,” he said. “Our common legacy as black Presbyterians and Christians is our identity as those prophetic witnesses to aggressively combat racism and injustice in the PCUSA.

“Even in the church, we have allowed politics, race, gender, culture, class and generation to divide us.”

A gathering of the Northeast Region of the NBPC has gained momentum in recent years. The group met in 2016 for the first time in many years to revitalize the Northeast Region and elect officers and is now meeting on an annual basis. Prior to that, the only contact they had was at the biennial national gatherings.

Another goal of the regional caucus was to gather youth and young adults for future work of the body. Rev. Maxine was pleasantly surprised at the ages of some of those who were engaged in the meeting in Harrisburg.

“I was proud to see some of our young people there actually participating in the sharing time after the groups met,” she said.

Freedom Rising, an overture that was passed at the 2016 General Assembly of the PCUSA, was also discussed at the caucus, with the hope of trying to connect chapters, congregations, presbyteries and synods with this mindset of stopping the plight of African-American males. 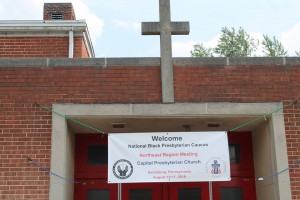 Along with Thomas Priest, also attending the regional event to lead conversations were the Rev. Estelle Aaron, the National Director of Chapter and Regional Development who traveled from Detroit, and Jewel McRae, the Associate for Women’s Leadership Development and Young Women’s Ministries, Racial Ethnic and Women’s Ministries, and the Presbyterian Mission Agency in Louisville.

“It was important for the people of the Northeast Region of the National Black Presbyterian Caucus to meet the national president and the director of Chapter and Regional Development,” Rev. Maxine admitted. “A lot of times you work in your chapters, but you’re not connected with the region or the national too much.”

Getting – and staying – connected is as important as ever for those in the Black Presbyterian Caucus.

“Sisters and brothers, the time is now for us to take our work seriously.”