Posted September 1, 2016 in Around the Synod

Note: Commissioner profiles are appearing regularly in the Synod of the Trinity enews. 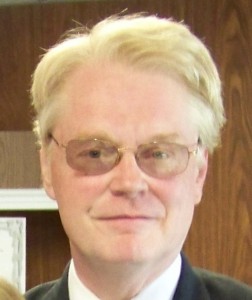 In what capacity do you serve (church name and leadership position, presbytery board, synod committee, etc.)?: Member and former elder, First Presbyterian Church of Meadville, 1964-1985, 2007-present

In what other capacity have you served in the past (former churches, committees, etc.)?: Former member and elder, Cochranton Presbyterian Church, 1985-2007; member Lake Erie Presbytery Judicial Committee; Synod commissioner from Lake Erie Presbytery, 2003-2006

When you’re not serving your church, what can you be found doing?: Historical research — mainly architecture and family history

Describe yourself in one word: Curiosity

What was your childhood dream job?: Professor

What steered you into this ministry field?: I did not seek the position as a commissioner, but followed my parents’ example and volunteered at my home church. Through that, I met lots of interesting people and made new friends there and throughout the presbytery, and when I was elected a commissioner, I was told by the nominating committee that as a lawyer, I was good with details, and in seeking compromise.

What goals do you have while serving as commissioner?: Representing my presbytery’s concerns to the Synod.

Why do you feel God has called you into this position of commissioner?: God has surprised me so many times, that’s hard to tell.

Any closing remarks?: In Yogi Berra’s words, this is “deja vu all over again.” When I first was a commissioner in 2003, the Synod had completed a long study, radically cut staff and downsized, and it was in the process of a complete reorganization, some of which ultimately worked and some did not. When I first attended last fall, the Synod had studied and transformed itself again, so we are all adjusting to the new system, and we will see what works for us.