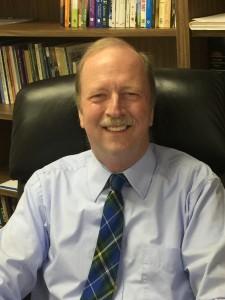 This evening, the General Assembly elected Ruling Elder Vilmarie Cintron-Oliveri of Tropical Florida Presbytery and Teaching Elder Cindy Kohlmann of Boston Presbytery as co-moderators. The election was decided on the fourth ballot. In conversation with my colleagues, none of us could remember an election going on this long, at least for the past several years. It was an interesting process to observe.

​On the first ballot, the votes were Atnip and Hockenberry 45, Johnson and Maxim 250, Cintron-Oliveri and Kohlmann 229. Johnson and Maxim had the lead as well as the support of the Young Adult Advisory Delegates, but it was still fairly close.

​On the fourth ballot, Cintron-Oliveri and Kohlmann made it over the top with 266 votes to 253 for Johnson and Maxim and 4 for Atnip and Hockenberry. 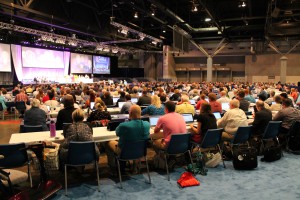 ​Still, the vote left me uneasy. One somewhat surprising thing is that even though we have only had one set of co-moderators that now seems to be the norm. One of the six questions the candidates had to answer was, “Why did some run as co-moderators and others as moderator and vice-moderator?” That was a fair question. I’m not sure Chantal Atnip gave a compelling answer as to why she ran as moderator and not part of a co-moderator team. The two-year term as moderator seems pretty grueling, and probably very few people, even those employed by a church, would find that they’d be able to take that much time away from their job. Having co-moderators makes the workload much easier and much more plausible. It also seems that in both of the other two teams the candidates had known each other for quite some time. Chantal Atnip had only started talking to Ken Hockenberry in March. I think that worked against her, too.

​The other two pairs of candidates seem pretty closely matched. None of them really said anything in the Q&A period that made them stand out. The commissioners asked about how their congregation could deal with the issue of racism and white privilege, how we can reach out to young adults who describe themselves as “spiritual but not religious,” what are your greatest strengths and what are your weaknesses as a team, what is your vision for the church, and in a society that is divided on so many issues, how will you reach across the divide?

​I suspect, though, that the reasons commissioners switched their votes to Cintron-Oliveri and Kohlmann and not to Johnson and Maxim was because Bertram Johnson identified himself as a gay man. He didn’t make a big deal about it, but he was open about that is who he is. I also suspect that was the reason the YAADs supported Johnson and Maxim. Maybe I’m wrong on both accounts. I suppose you could also say the reason some voted against Johnson and Maxim is because Johnson is an African-American and Maxim is an immigrant from Columbia. Who knows?

​One last thing about the election: our own Larryetta Ellis made the motion to nominate Chantal Atnip as moderator. It was great to hear her voice and see her face up on the big screen.

​One of the touching parts of this evening’s session was that they took time to recognize those ministers who had passed away since the last General Assembly meeting. The names of Lawton Posey and Ed Bowen were in the printed booklet, as were Karen Long (for longtime PWV folks, that was Kay Long’s daughter); Arnold Lovell, former pastor of First Presbyterian Church of South Charleston; and Syngman Rhee, former GA moderator who was supported by First Presbyterian Church of Charleston while he attended Davis & Elkins College. I was looking for the names of Frank Mansell and another friend of mine, but they weren’t there, which probably had to do with when the deaths were reported and when the booklet was printed. I couldn’t help but think that unless Jesus comes soon my name is going to be in a booklet like that someday.

​Tomorrow, commissioners and other GA attendees will scatter for worship in various churches in Giddings-Lovejoy Presbytery. I signed up to worship at Cote Brillante Presbyterian Church. It’s an African-American congregation that I visited when I was here last summer for Big Tent. Also, one of their former pastors is a friend of mine.

​There will be another plenary session tomorrow afternoon where we’ll hear “reports of Special Committees and Commissions.” I’m hoping that’s going to be more interesting than it sounds.

​Then, tomorrow evening, most GA committees will have their first meetings, although I think there may have been one or two committees that started their work on Friday. The first hour of those meetings are closed to outside observers. I suppose I could wait around to observe the last half hour or 45 minutes of committee work, but I think I’ll probably just watch the Sunday night baseball game on TV. Some friends are planning to go to the game, which is tempting; however, St Louis is hot. Not the trendy, exciting, hip, kind of hot, but the 90 degree 90 percent humidity kind of hot. I don’t like it hot. I frequently thank God for air conditioning. Another possibility, though, is listening to live music at the National Blues Museum, which is a block down from the convention center. That sounds cool in a number of different ways.

​On a sad note, Peg True, a ruling elder commissioner from National Capital Presbytery, passed away today. Apparently she had fallen yesterday and was taken to the hospital, but she did not make it. They announced her death this evening. Please remember her family and friends in your prayers as well as all of the commissioners to the 223rd General Assembly, especially our new co-moderators, Vilmarie Cintron-Oliveri and Cindy Kohlmann.