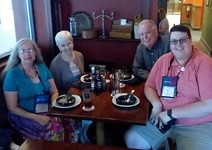 Below I’ve listed some of the comments we shared, but if you want the official news on business and events straight from GA, here are two sources:

The BIG NEWS is that our Overture 024, to include Valley United PC in the Presbytery of Lackawanna and Synod of the Trinity, was passed as part of today’s consent agenda. WELCOME, Valley congregation and Pastor Sharan! We celebrate this action and are so blessed to have you among us officially.

You never know what will happen next! Keep watching the news feeds (you can even watch live stream!) for updates. We’ll all be back next week and will share some of our experience with the presbytery at its September meeting. Thanks for your prayers and support.

See you all soon, Marge