With an opportunity for everyone to “catch their breath” before beginning the more significant work of the full Assembly in plenary sessions, we gathered together to worship our God in an ecumenical service. With the proclamation of the Word offered by Rev. Najla Kassab (National Evangelical Synod of Syria and Lebanon), president of the World Communion of Reformed Church, there was a message focused on the reconciling work of the gospel in Jesus Christ. Having been challenged and fed by the Word, we were nourished at the table of the Lord’s Supper. Throughout the day, there were opportunities for various ecumenical delegates to both speak and pray.

With the plenary session in the afternoon, a comprehensive consent agenda was submitted which included eighty seven items. It included more perfunctory and procedural matters, but also resolutions and proposals that were passed with little or no controversy and had a nearly unanimous or more vote (requirement of at least 75%) within the committee.

One of those items that was included and passed by “consent” was the Commissioner’s resolution initiated by Sue Washburn on addressing the impact of the opioid crisis and other substance abuse disorders upon our churches and our communities. 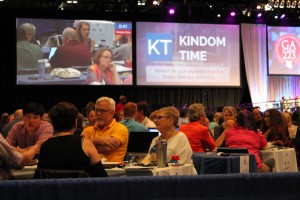 Other items included and approved in the consent agenda included an overture to have a team created to review the current per capita based system of funding the ministry of councils higher than the session. Reports from agencies of the church as well as listings of affiliated colleges and nominations for seminary trustees were included in this agenda. Other consent items affirmed previous commitments of the church regarding caring for our earth, responding to rights violations around the world and participation in ecumenical groups.

As the Assembly began, seven items were “pulled” from the consent agenda for later consideration and debate included items on education and advocacy regarding climate change, a statement about racist nationalism, a call for a moratorium on executions, condemnation of the violence in Gaza, support for the “Reclaiming Jesus” statement, and study the forthcoming international automation crisis.

Beyond the consent agenda, the following items were some of those taken up and passed during the Assembly plenaries on Wednesday afternoon and evening.

As with any large group meeting operating under the rules for parliamentary procedure, there was some adjustment along the way during these first plenary sessions as everyone became more accustomed to the means by which items may be considered, deliberated, revised, processed and decided. All in all, items were handled in ways that provided for discussion and dissent. As with any Assembly, with all of its committees, the temptation is always present to attempt to address every issue with urgency and before the next General Assembly. Consequently, each action is anticipated by financial implications which are often based upon the work of staff and national agencies.