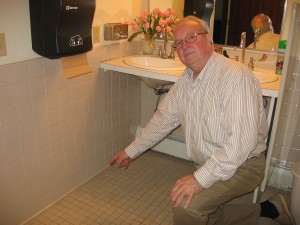 Pastor Roger Griffith points to the spot in the bathroom where he found a 5-day-old baby that had been abandoned by her mother at Moosic Presbyterian Church.

A baby taken out of harm’s way, left to be found by someone who would make the right decisions for the newborn. If that sounds a little like the Bible story of baby Moses, you’re right. It’s also the story of the “Miracle Child” in Moosic, PA.

A 5-day-old baby girl was left in the Moosic Presbyterian Church’s bathroom on a Tuesday morning in early September only to be discovered by the church’s minister, Pastor Roger Griffith. The incident has helped bring a loving community together and given the congregation a common goal of assisting this baby and mother through prayer and any other means possible.

On a very warm morning in early September, Roger entered Moosic PC at 10 a.m. Roger is a retired, part-time temporary supply pastor whose only weekdays in his church office are Tuesdays and Thursdays. With the building being stuffy due to the warm temperatures, Roger stepped into his office, shut his door and turned on the air conditioner.

About a half hour into his morning Roger heard a noise that he thought sounded like a cat meowing. He originally ignored the sound, but when he heard it a second time, he thought he should check the church just to make sure the cat hadn’t somehow gotten into some place it couldn’t get out of.

“It sounded like a kitten’s whimper,” Roger said, recalling the noise he heard. “I kind of dismissed it when I first heard it and just kept on working. Then I heard it a second time. I thought maybe it’s inside the church – in a closet, in the elevator, or some place and can’t get out. I better not just ignore this, I better check it out. I went over the entire upstairs of the church – the sanctuary, Sunday school rooms. I checked the elevator, checked all the closets. Didn’t find anything, didn’t hear any more cries.

“I went downstairs and did the same thing. Checked every nook and cranny in our fellowship hall and kitchen. On my way back up the carpeted stairs leading to my office I thought, ‘Well, you didn’t check the bathroom. You’ve gone this far, might as well check the bathroom in case someone might have fallen in a stall, broke a hip, hit their head and was crying out for help. When I walked in, to my left of the sink I saw what I thought was a child’s baby doll. There was a blanket and a baby there and I thought, ‘Oh, well, one of the kids left a baby doll lay there.’ Until I took a second look and saw her little arms moving and could see her breathing. I thought, ‘Oh my goodness, here is a child, it’s not a doll, now what am I gonna do?’”

What Roger did was quickly dial 9-1-1 and within 10 minutes the police and an ambulance were on scene. The baby, which was deemed to be delivered at full term, still had her umbilical cord attached. The child was taken to the hospital for testing and has since presumably been taken into foster care. Due to the ongoing investigation of the incident, the whereabouts of the baby have not been revealed to the public.

As the story became known that day, television crews and newspaper reporters made their way to Moosic PC to talk to Roger about the incident. (See a news report here.) It created a whirlwind of attention for Roger and the church and an outpouring of love and support for the baby, which the church has named “Miracle Child.” The following day as word continued to spread about the discovery made in the Moosic PC bathroom, the mother of the baby came forward to the police. As of late October, no charges had been filed and the case is still being reviewed by the Moosic District Attorney.

Roger was told that if the baby hadn’t been found within 24 hours, it could have died. One Sunday morning a few weeks later, a woman approached Roger in church and said she was a nurse at the hospital where the baby had been taken. She wanted to let Roger and the congregation know that the baby was in good health but she could not speak to the whereabouts of the child.

Roger believes the mother, who he heard is 18 years old and lives with her parents, does not have any formal connection to the church. He thinks she knew the pastor’s routine, waited until he unlocked the church and went upstairs to his office before she entered down the stairs quietly and into the bathroom for the best spot to place the baby.

“I think the baby was placed in that bathroom because the church does not have central air,” Roger said. “Being that it was a very hot day, it was very warm in the church. The coolest place in the church to leave a baby would be in the downstairs, which is always cooler than the upstairs, and in the bathroom on the tile floor.” 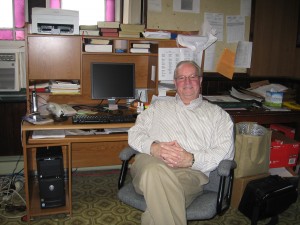 Pastor Roger Griffith was working in his office when he heard something that sounded like a cat’s meow. After searching the entire church, he discovered that a newborn baby girl had been left in the bathroom.

Speculation is that the mother did know her way around the church building and might have even attended a recent talent show and ice cream social at Moosic PC.

“Maybe at that time, she may have attended that event, or maybe some other time had been in our church and knew the layout,” Roger guessed. “Knowing that she was going to deliver and that was the plan to leave the baby in the church, maybe that’s how she knew the best place to leave the baby.”

The fact that the mother chose to leave her daughter at Moosic PC has turned out to be a blessing to the congregation, which has opened its arms to both the mother and child.

“We as a congregation, as we’ve discussed it, want to use this as an opportunity first of all to try to educate the public that if you have a child and can’t take care of it, take it to a safe place like a police station or a clinic or a hospital,” Roger said.

Roger added that the church has received several phone calls “from coast to coast” from people wanting to adopt the baby. Of course, that is not in the hands of the church, which has had to be patient during this whole process.

“We’ve been letting due process take place,” Roger said. “There’s such security surrounding this event it’s very hard to do anything, other than have the child and the mother on our prayer list. In light of scripture, we want to do the right thing as a church. There’s not a whole lot we can do about the due process, but we want to offer our support and we want to reach out the way a church should reach out.

“I hope this does have a happy ending. I hope that through all of this we will see God’s hand working and that we’ll be led by the Spirit on what we need to do as a church and how we can help. I’m just looking for this someday to turn out as something positive.”