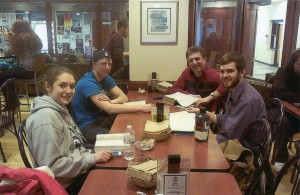 The Rev. Tim Solomon (red shirt) sits with a small group of students at a Bible study in the cafe of the Student Union Building at Behrend College.

The Rev. Dave Edmunds was asked to lead a worship service at Behrend College in Erie, PA, in the late 1980s. He prepared a short sermon, some music and was more-than-ready to interact with whoever walked through the doors of the Student Union Building’s auditorium that Sunday afternoon. But only one student came.

Some 25 years later, that initial attempt at providing a Christian outreach for students at the Penn State University branch campus has turned into a thriving program called Protestant Campus Ministry. Designed to provide not only an on-campus Sunday worship time but also Bible study and small-group gatherings, lecture programs, involvement in community service projects and fellowship, PCM has blossomed from its humble beginnings into something that is out-of-the-ordinary considering Behrend is a state-run school.

“We want to reach as many of the kids who come from a Protestant background to make them aware of the presence of a chaplain and a campus ministry that’s there for them so that they can continue to explore and develop their own faith the same way they are exploring and developing what they want to pursue as a career,” Dave said. “Ultimately there is a hope for those kids who don’t come from any faith background that they will find the opportunity to explore what the Christian faith is all about.”

Dave is now chair of the program and serves as pastor at Belle Valley Presbyterian Church as well. He is also the Coordinating Committee Moderator for the Presbytery of Lake Erie.

Protestant Campus Ministry is part of a dual program at Behrend that shares chapel space with the Catholic Campus Ministry and reaches in the neighborhood of 40 students through its weekly programs. That number is hampered because Behrend is mostly a commuter school, so many of the students live at home and can attend their own church on Sunday mornings. 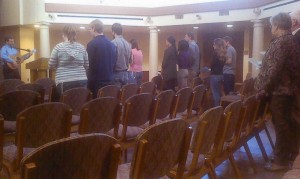 Another obstacle is that the college’s chapel is not in the center of traffic pathways of students, so extra effort is needed to get the word out about the program. That’s where the Rev. Tim Solomon comes in. A Presbyterian Church (U.S.A.) pastor in Meadville, PA, in the Presbytery of Lake Erie, Tim is the director of PCM and has helped increase the amount of students who are connecting with the ministry on a regular basis despite only being part-time.

“What we try to do is provide a solid worship experience that is Gospel-centered and Christ-oriented and that, of course, applies to their lives currently,” Tim said, “not just the personal narrowly spiritual side but that challenges them to think through the claim of Christ on their lives completely.”

“He makes regular contacts with not only the students who get involved with the programming of Campus Ministry but he really tries to be visible and present,” Dave added. “There’s a couple of the key locations on campus – the dining halls and main student building – where he does cold contacts with students just to let them know that Protestant Campus Ministry is there and available.”

Another way Tim has increased student participation is through his connections to the Middle East. He not only has taught college-level courses on the Christian-Muslim relationship but his grandparents are first-generation immigrants from Syria. Tim has traveled extensively to the region and still has extended family connections there.

“Whenever I have a chance, I introduce perspectives from other faiths, especially Judaism,” Tim said. “I have an advanced degree in Islamic studies, so I try to make connections and comparisons with Muslims as well. I am the co-advisor of the Muslim student group, so I’m often helping them understand Christianity in a non-threatening way. And I’m helping Christians understand Muslims in a non-threatening way as well. We’re not as willing to own that fact that Christians inspire fear in Muslims, so I’m trying to be that person who’s not that kind of a Christian to Muslims.” 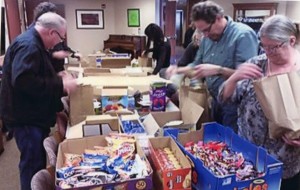 PCM board chairperson Dave Edmunds and others help to pack goody bags for Behrend’s “Refuel for Finals” at the end of each semester. About 150 bags are distributed each time.

Tim’s work helps PCM stay in line with its faith statement, which reads “Our mission in ministry is to present Christ’s presence to the academic community through listening, caring and sharing, and in so doing to involve students at Penn State Behrend, as well as lay people and clergy, of many Protestant traditions.”

“A lot of the programming is about maintaining an opportunity for students to explore,” Dave added, “not only their own faith for their spiritual heritage – and lack of heritage, if you will, for some students – in the midst of exploring academia. What we’re about is trying to provide a very positive atmosphere and presence for students to explore the Christian faith.”

Campus ministry grants from the Synod of the Trinity, which have totaled in excess of $60,000 in the past 10 years, help support the Protestant Campus Ministry by contributing to Tim’s salary and the PCM program. But none of it would be possible without the cooperation of Behrend College, a state-run institution of the Penn State system that doesn’t have to be open to having religious organizations on its campus.

“We’re walking a fine line of feeling like we’re given a privilege of having the access and some of the freedom we do have being on campus without biting the hand that feeds us in the sense of giving us this access,” Dave said. “We really do appreciate the opportunity that Penn State administratively gives us. There’s a certain trust that we want to continue to safely guard, but it’s not like we’re playing it so safe that we don’t take the opportunities to share what faith is all about in the first place. There is a delicate line that we try to follow, and I think Tim does that very well.”

Being available at Behrend is just one of the minor miracles that has taken place since the inception of Campus Ministry in the early 1990s a few years after Dave gave his first attempt at a worship service one Sunday afternoon. Another is the fact that the Smith Chapel was established through a husband-and-wife team that did not have an official connection to the campus.

“The way that Campus Ministry even came about in the first place on a state-related campus versus a private campus is just amazing,” Dave said. “To all of us who had any relationship with Campus Ministry in general at Behrend, we have seen how God really opened some doors to make that happen. It’s just such an unusual thing to find a chapel that has been provided. It came through private-funding sources, but the campus was open to allowing that to happen. To us that really felt like God’s hand opening that up.”

And with that opportunity at Behrend, Tim is taking the Bible – so to speak – and running with it.

“The greatest role I think PCM is playing in the lives of students at Behrend would be, Lord willing, to really bring the Gospel to bear on the lives of the students, something that they might have sectioned off from their day-to-day lives and they’ll find ways for this to really impact them,” Tim said. “That the message of Jesus 2,000 years ago is as impactful and powerful as it was when he was originally challenging people.”