An inspiration during Crop Hunger Walk 2020 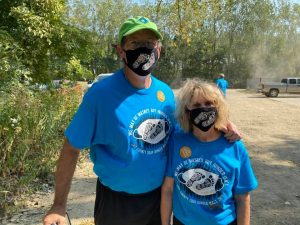 Denis Jacobson and his wife Lori get ready to take part in the annual Crop Walk in Erie, PA.

During this year’s Crop Hunger Walk, not only did we have a beautiful day on which to walk, but we had the extra beautiful sight of our brother and sister, Ruling Elder Denis Jacobson and his wife Lori, coming to walk along with us. This was SUCH a joy because at the same time last year, we didn’t know if we’d have Denis with us much longer.

Unknown to him, Denis was born with an arteriovenous malformation or AVM and had a 1-2 percent chance yearly of it rupturing. An AVM is a tangle of abnormal blood vessels that connect arteries and veins to the brain. According to the Mayo Clinic this condition is rare and only occurs in less than 1 percent of the human population.

For an unknown medical reason, on Oct. 10, 2019, the AVM ruptured, causing a severe brain bleed, resulting in a stroke. His left side was completely paralyzed. He was taken by ambulance to AHN St. Vincent Hospital in Erie, and quickly put on life support. A CAT scan revealed something in his brain, which was later determined to be the AVM. The neurosurgeons didn’t know if this was formed from the stroke, or caused the stroke. The doctors in Erie were unable to help Denis. His CAT scan report was sent to the director of neurosurgery at AHN Allegheny General Hospital in Pittsburgh to see if he could help Denis… and he could! Denis was life-flighted, and on Oct. 12, he had lifesaving brain surgery.

As a result of this ordeal, his brain works slower. It’s our prayer God will continue to heal him physically and mentally. It has been said to be a slow process, in very small increments and this progress can take years. He is able to use his left side more with each passing day, and God’s been giving him the endurance and love to live daily.

When Denis walked over to the Church of the Cross Crop Hunger Walk team, he was greeted with smiles and an applause. It was said that his attendance and care for the Crop Hunger Walk was “inspirational.” Denis has said that these words of Scripture inspire him daily: “I am confident of this, that the one who began a good work among you will bring it to completion by the day of Jesus Christ” -Philippians 1:6.

Lori says to remind Denis of this verse often due to it being fitting for him. She says that their love for the Lord is stronger than ever and they tear up thinking about God’s love, grace and life He’s blessed Denis with.

The Church of the Cross Crop Walk Team poses for a photo prior to this year’s Crop Walk in Erie, PA.