Anniversary helps First Church of Morgantown, WV, renew its commitment to the community 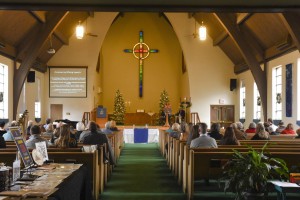 Zac Morton is the new pastor at the First Presbyterian Church of Morgantown, WV, and is doing his part to keep the congregation’s long-standing traditions intact.

For 230 years, the First Presbyterian Church of Morgantown, WV, has been ahead of the curve. Its history starts with a 40-year ecumenical partnership, something that was rare in the late 1700s. Later, the congregation sent several families overseas as part of a missionary outreach, something that was again unheard of in the early 1800s. And a century later, before the civil rights movement was taking shape, a black family was invited to sit in the front pew of the sanctuary and the congregation helped organize the first integrated pool in the state.

With that in mind, it’s no wonder that First Morgantown has a long-standing commitment of being a welcoming and inclusive congregation in this college town of around 30,000 people. And that focus will not change, now that the Rev. Zac Morton is standing behind the pulpit on Sunday mornings. In his third call, Zac is making himself at home after three-year stints as an associate pastor in Manhattan, KS, and then as part of a church plant in Atlanta.

“They are wanting to become more engaged in mission work in the community and that they had a legacy of doing that before,” said Zac, who started at First Morgantown in May, when asked what attracted him to his current call. “They wanted someone to create a vision with them of how to do that. They are a very welcoming and inclusive church. I’ve always been there but I’ve had to toe the line and make room for other people because I’ve never been in a congregation that was quite OK with heading in that direction. And they have enthusiasm and are poised to lead.”

It’s also a homecoming of sorts for Zac, who grew up in Houston, PA, which is a town south of Pittsburgh and within an hour’s drive of Morgantown. While there’s certainly no place like home, Zac has quickly planted roots with the congregation and is making a name for himself among the church community.

“I think that the congregation is in a great place to envision what the next five or 10 years are going to look like,” he said. “That’s the big discernment piece that we are going to be embarking on here really soon. It’s a congregation with a lot of energy and just directing that energy in the direction that God’s calling us to go, that’s the next piece. That high energy has really been helpful.

“Part of the work of the first year is developing trust and just doing my best to do as well as I can through this first year. Showing up, doing quality work and making sure that people know that I have love and care for them. I want to get to know what people’s spiritual journey is like.” 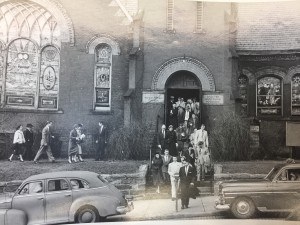 For 230 years, First Morgantown has been a church that is welcoming to everyone in this West Virginia college town.

While Zac has launched a new Bible class (“Bible and Burritos”) at a local restaurant – it’s a Bible “workshop,” not a Bible “study” – and a couple new mission projects in his first six months of his call, he hasn’t made any drastic changes. But that doesn’t mean has hasn’t left his footprint on the congregation in the early going.

Zac was leafing through a book on the history of the church in late September when he discovered that First Morgantown was established on Oct. 21, 1788. Quick math made him realize that within a few weeks the church would be 230 years old. He decided to dedicate the month of November to telling the history of the church under the tagline of “230 Years of God’s Abundance.” Bulletins from the decades of the 1900s were displayed and liturgy found in them was used in worship.

After tracing the church’s roots to the courthouse in Morgantown, Zac discovered that the congregation teamed up with the local Episcopalian congregation to build its first meeting house in the late 1700s, a building the two denominations shared for four decades.

Zac’s next eye-opening find was the church’s commitment to eight families it sent to India as part of a missionary outreach. He also discovered that one of the missionaries died while serving in India, and there is a still a Presbyterian gravestone in Calcutta that marks that death from the 1830s. Several decades later more missionaries were sent to Thailand from First Morgantown in another unique display of Christian service for the time.

By the 1930s, the congregation had included in its focus working for racial reconciliation in Morgantown. It was in the minutes that Zac discovered that a visiting African-American family was invited to sit at the front of the church in an area that was normally reserved for guests of honor.

“It was written about and recorded, so I’m assuming it was a pretty big deal for people,” Zac said. “You wished all of these things would have happened sooner. They were ahead of the curve for this community.”

In 1948, the congregation’s fundraising and building efforts helped construct the first non-segregated pool in the state of West Virginia. Twenty years later the congregation’s session made another stand by drafting a public statement welcoming all people of color into its sanctuary.

It’s just part of a long history of inclusion for First Morgantown that “seeks to practice the hospitality of Jesus by welcoming and embracing all persons, celebrating God’s creative diversity of race, ethnicity, gender, sexual orientation, ability, age, economic status and life situations.” 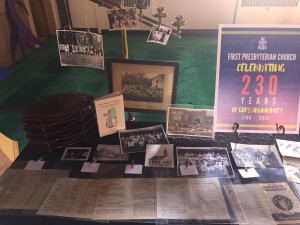 Bulletins from every decade in the 1900s were on display during a month-long celebration of First Morgantown’s anniversary.

“The thing that really resonated with me and a lot of people in the congregation is a statement that the session made (in the 1960s), it ended with the phrase, ‘We invite everyone to respond to the simple invitation of Jesus Christ. Come,’” Zac said. “That simple invitation of Christ informs why they were welcoming, I think that is something that carries huge weight for us going forward. It helps us understand the identity of the church because the church has developed a very intentional position of welcome in the community.

“A lot of that is around different social backgrounds and different ethnicities. We get a fair amount of diversity here because of (West Virginia) university and because we have such a strong connection to the university. It’s especially important for us in this last decade or so of the church for LGBTQ inclusion and welcome. That’s been a big identity marker for the church. This has been a learning curve for me. Close to 40 percent of our congregation are either LGBTQ or they have persons of LGBTQ in their family. The issue of being welcoming and celebrating those folks is really important to them.”

By celebrating the congregation’s 230th anniversary, it allows the First Presbyterian Church of Morgantown to embrace its rich history and understand the path it has blazed in the community.

“I felt that it was really important for the congregation to be reminded that they have a long tradition and legacy that they are a part of,” Zac said. “It’s something to take pride in. This church has had a tough last decade. We have a lot to be proud of. We have a long story that we are a part of of how God has been faithful. This congregation has walked with God for this long, and that’s not about to stop. We have a whole other chapter that’s being written, and our story will continue.”