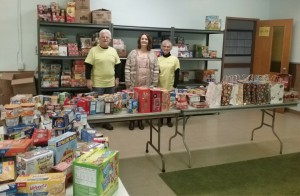 Volunteers from Apollo United Presbyterian Church get ready to pack bags of food that will be distributed to children in need at the local elementary school.

About half of the children who attend Apollo-Ridge School District in Armstrong County, PA, are eligible to receive reduced or free lunches because of the financial circumstances of their household. It’s a staggering figure that hasn’t gone unnoticed by the churches and community of Apollo.

Last spring, a meeting was called by Pastor Lea Austin and Candy George of Apollo United Presbyterian Church in which five congregations were represented. They brainstormed ways to help students in need get food during the weekends and over the holidays so that they don’t go hungry. And that’s when Food 4 Kids was born.

Food 4 Kids supplies eight single-serve food items for about 30 kids in grades kindergarten through second grade at Apollo-Ridge Elementary School. The items range from cereal to mac and cheese to nuts to juice boxes. The food items are packaged in grocery bags and handed out by the teachers on Friday afternoons. It’s a much-needed community program that continues to grow.

“It is very much a cooperative effort,” Lea said.

A couple of the congregations that are involved have different roles in the Food 4 Kids program. Apollo United houses the food and serves as the packing and distribution center, while the local Lutheran church oversees the financial responsibilities.

“Being a large building with a small congregation, that is something we can offer,” Lea said of Apollo United Church. “And I’m glad we do.”

Food 4 Kids, which has grown to involve contributions from seven or eight churches as well as teachers and other community members, started in October. Having this collaborate effort is nothing new for the community, especially the churches, which have teamed up for Lenten lunches and vacation Bible school in the past. 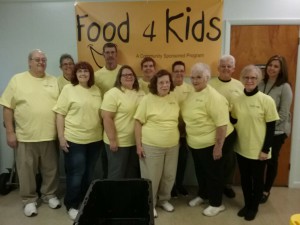 The Apollo community has gathered in support of the Food 4 Kids program.

This is not the first time the Apollo community has tried to start a food initiative. A few years ago, a summer program was discussed at the urging of Lea. However, due to strict state guidelines surrounding summer food programs, this idea was never able to get off the ground. With the Food 4 Kids program, Apollo United was able to adapt a model used by a couple of local communities, making it easier to start than a summer one.

“Continuing to think about the food insecurity in the area, with this other model, Candy and I said let’s see if we can do something during the school year,” Lea said. “It really did grow fairly fast.”

Many communities provide a backpack program for the needy youth in their areas, where the food is transported home in a backpack, but this initiative decided to shy away from that as it involves an extra step to have the backpacks returned to the church to be filled each week. Instead at Apollo United, the packing occurs every three weeks, and the nearly 100 bags of food are placed in bins that are then transported to the school and distributed to the students by the teachers during a three-week period. This makes for a less labor-intensive program that requires fewer volunteers.

“There’s a number of folks who are willing to haul things to the elementary school with their trucks, so, so far, with the level we’re at, it’s been no trouble trying to find the people to work with this,” Lea added.

Apollo United Church has regular hours for the community to drop off food items. The food is then stored at the church, where the volunteers gather every three weeks to pack the bags.

“When there is a holiday, they actually pack extra bags,” Lea said. “We’ve had donations for different holidays. For example, on Valentine’s Day, somebody provided a treat that went into the bags.” 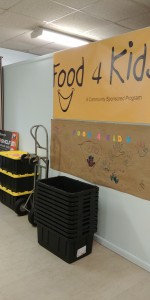 With 50 percent of the children in the school district being food insecure, and with roughly 200 children in those first three grades, Lea admitted that she thought the number of children the Food 4 Kids program would serve would be more than 30. Lea and Candy would love to see the program expanded to more children in more grades, but they also want to be sure that if they open it up to another grade that they can fully serve everyone in need and not have to turn someone away.

“I really have a sense that this is going to be viable into the future,” Lea said. “Right now they are being cautious expanding into other grades because once you do that, you really can’t go back.”

The cost for the food is roughly $3 per child, so people wishing to donate are told that for $120 they can support a student for a whole year. One place the funds come from are from the teachers themselves who will pay a small amount of money to “dress down” for casual Fridays. That accumulated money is in turn given back to the Food 4 Kids program. The Kiskiminetas Presbytery also awarded a $1,000 A.R. Hibbs Grant to the Food 4 Kids program in early 2019.

“We have enough finances that if we had to buy all of the food, we could do it,” Lea said. “There has been a variety of financial support. The businesses in the community are willing to put out bins for donations.

“Occasionally people, instead of buying their food ahead of time, will ask, ‘What do you need?’” Lea continued. “Then they’ll go to Sam’s Club or some place like that and buy a whole bunch of something. But we do have enough financial support that we have the option to buy some things through the school, so that we can get the same kinds of things they provide for the children.”

The plan is to review the Food 4 Kids program at the end of the school year, and that’s when a decision will be made regarding expansion. Until then, the Apollo community will continue to rise up to meet a need that certainly deserves the attention it is getting.

“This program has caught and grown, and I believe that’s because it’s what God wants for this community,” Lea said. “I look at how God places things in front of you that kind of spark, ‘Oh, maybe you can do this.’ In great part, I believe, God’s kind of put it into enough people’s hearts to get this thing going. He blessed those beginning conversations so that it is really a pretty strong program right now.”