In September of 2018, the city of Baltimore was selected as the host site for the 2019 Big Tent gathering of the Presbyterian Church (U.S.A.). With the 2020 General Assembly already scheduled for Baltimore, it wasn’t really a surprise that “Charm City” was named as the location for Big Tent a year earlier.

But what is a bit coincidental – or maybe divine intervention is a better way to describe it – is that just days prior to the Big Ten gathering, the president of the United States tweeted that, in response to remarks made by a congressman from Baltimore, the city had far worse conditions than that of the Mexican border. The president tweeted that Baltimore, “is a disgusting, rat and rodent infested mess. If (the congressman) spent more time in Baltimore, maybe he could help clean up this very dangerous & filthy place.”

Clearly, those remarks were heard and provided a strong backdrop for the three-day Big Tent event that was filled with themes of formation and transformation. 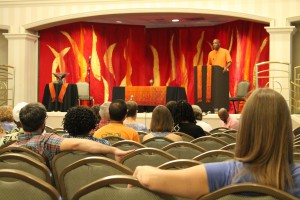 “Welcome to Baltimore,” said Tom Hay, the retiring director of Assembly Operations for the Office of the General Assembly as he opened Big Tent, “a city where God has called the Presbyterian Church. We have seen Baltimore characterized on twitter but here we are.”

The Rev. Dr. J. Herbert Nelson, the stated clerk of the Presbyterian Church (U.S.A.), also made mention to the president’s remarks during his opening prayer.

“Thank you for the opportunity to be in a place called Baltimore,” he prayed. “Yes, Baltimore. A place that has been demeaned by people in high places and a place you call your people to to redeem as we make it your own.”

J. Herbert also provided a summary of what was to come for the hundreds of Presbyterians that had gathered on this Thursday afternoon.

“It’s an opportunity to come together, learn together, share together as we renew our vision for what it means to be a church that is not dying but that is reforming,” he said.

Ruling Elder Elona Street-Stewart, the executive at the Synod of Lakes and Prairies (located in Minnesota) who is of Nanticoke Native American descent, followed by reminding everyone who were the first people to occupy the lands of Baltimore.

“We need to give thanks to those who sand the first song,” she said, referring to the Algonquin tribes that are the most populous in the United States. “There are 8,500 Native American people still living in Baltimore. There is no beginning or end as we continue to walk in their footsteps.”

Melva Lowry and Olivia Thomas, Hands and Feet Fellows at The Center-Baltimore, a ministry of the Presbytery of Baltimore, continually asked “Are you paying attention?” as they spoke about the city. Referencing the president’s comments, Melva admitted that Baltimore does have its issues and is treated like a stepchild or an orphan by the rest of Baltimore County and the state of Maryland.

“The hardest thing about living in Baltimore is not Baltimore but living in exile while your neighbors run free, seeing how the rest of Maryland treats Baltimore,” she said.

The speaker during the Thursday afternoon plenary session was the Rev. Dr. Soong Chan-Rah, an associate professor of Church Growth and Evangelism at North Park Theological Seminary in Chicago. He spoke on the absence of lament in the church.

“The idea of triumph and victory and exceptionalism is not an idea of God’s church,” he said. “We need lament as a biblical corrective to our unbiblical assumptions.”

Soong reflected on the church of the 1940s to the 1970s, when many congregations built structures that had wooden, intricate, ark-type ceilings, helping bring the story of Noah to the forefront of church every Sunday. But, Soong asked, “How do you do evangelism from an ark?”

Soong reacted to a comment made by former U.S. President Ronald Reagan, who suggested that women who continue to have children and thus require things like food stamps to keep the growing family going are “welfare queens.” Soong said his mother worked 12 hours (10 a.m. to 10 p.m.) at a local restaurant, then worked another shift (11 p.m. to 6 a.m.) at a nursing home. She would return home to take care of her children in the morning before getting only a couple hours of sleep before doing it all over again the next day.

“She worked 20 hours a day, six days a week to keep the family together,” Soong said. “It (minimum wage) wasn’t enough. We needed federal assistance.”

His mother, a role model for him and one who passed down her work ethic to others, was a “spiritual giant,” as she had knees that had been cracked and broken because of all of the time she spent praying on them. 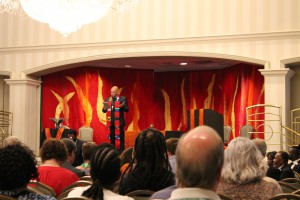 Rev. Dr. Amaury Tanon-Santos, the synod networker for the Synod of the Northeast, was bi-lingual in giving his sermon in Spanish, then English.

Opening worship Thursday evening was led by the Rev. Dr. Amaury Tanon-Santos, who is the synod networker for the Synod of the Northeast. His sermon, titled “Would you be a good neighbor?”, was bi-lingual, as he would begin speaking in Spanish before translating it into English. With the Community Concert Choir of Baltimore as a backdrop, he spoke of the Good Samaritan parable, saying we should act like the Good Samaritan who cared for the man who had been left for dead by the roadside. And that involves being a good neighbor.

“To find out who your neighbor is,” Amaury said, “you must first be a neighbor yourself.”

He continued that there are important questions that need to be addressed.