Day 2 of the 2019 Big Tent gathering in Baltimore began with breakout workshops, with topics ranging from “Ecumenism and Social Justice Movements” to “Reviving Our Witness to Young People by Supporting Public Schools” to “New Models and Tools for Short-Term Mission.” With the Synod holding regional meetings earlier this year on hate speech and hate behavior, and with many congregations within the Synod’s bounds (and certainly beyond) struggling to stay afloat, Synod Communications Coordinator Mike Givler attended two workshops that focused on those subjects. 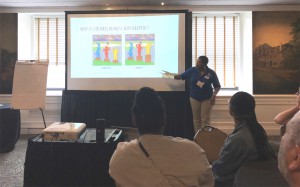 Former PCUSA Co-Moderator Denise Anderson leads a discussion on “What is a Racist?” during day 2 of the Big Tent gathering in Baltimore.

Former PCUSA Co-Moderator Denise Anderson, the current coordinator for Racial & Intercultural Justice for the Presbyterian Mission Agency, led a discussion on “What is a Racist? Unlearning What We Think We Already Know.”

The session began with each table creating a portrait of a racist on a large sheet of paper that included words and pictures. From those displays a few similarities were uncovered among the group, that a racist person uses things like power, language, privilege, ignorance, identity, denial and judgement to feed into their mindset.

“There are lots of influences that shape what it means to be a racist,” Denise added.

Using a video featuring Francheska Ramsey of MTV News, five things everyone should know about racism were listed. They are:

Jason Santos, PMA’s Mission Coordinator for Christian Formation, and Brian Frick, PMA’s Mission Associate for Formation and Camp and Conference Ministries, led an afternoon conversation on “Killing Church Softly: Reviving Church Loudly.” Jason said every 500 years there is a massive shift in the church, and that we are in the midst of that shift now. Particularly over the last 100 years, there has been a notable movement from a community-oriented culture to a more individualistically focused one. He also suggested that the church has moved from a more pastoral model of the church to a highly programmatic one.

These shifts lead to the current expressions of children and youth ministry – highly programmatic gatherings that are aimed at forming faith. But with young adults leaving the church in hoards, it is clear that our programmatic efforts might not have accomplished what we hoped for. Jason asserted that intergenerational formation offers a necessary corrective for the exodus we’re witnessing among our young people.

“When generations practice holy rhythms together, their identities are formed, as are their beliefs,” Jason said. “In the end, we’re not trying to just pass on information, we’re trying to help people of all ages understand who they are in Christ.” 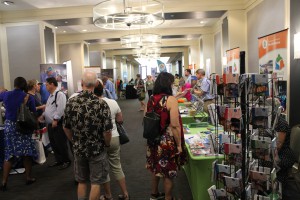 The Exhibit Hall at Big Tent is always a popular spot for people to learn about programs and organizations of the Presbyterian Church (U.S.A.).

Brian emphasized the need to bring children and youth back into worship and to move to an Intergenerational model of ministry in our congregation. “If, as Jason pointed out, the segmentation of ages in our congregations is leading to less young adults coming back to church, we need to find ways to connect and include children and youth as they grow up.” Brian suggested we can build Intergenerational connections and belonging through sharing in practices such as storytelling, service, hospitality, retreat, prayer and sabbath.

He also listed three things a congregation can do in the next week, next month and next year to foster an Intergenerational ministry focus.

The second plenary gathering of Big Tent occurred late Friday afternoon and opened with yet another response to the president’s comments about the state of Baltimore. “President 45 was half right. We are infested,” said Jacqueline Taylor, the general presbyter of the Presbytery of Baltimore. “We are infested with PCUSA congregations who love and serve this city.”

The Rev. Amantha Barbee, the pastor at Oakhurst Presbyterian Church in Decatur, GA, was the main speaker for the plenary, focusing on “transitions.” She pointed out that the PCUSA is largely a white, well-educated, liberal denomination – and one that is shrinking. 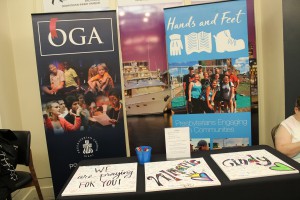 People were encouraged to write notes of encouragement to the PCUSA’s co-moderators and stated clerk in the Exhibit Hall at Big Tent.

She continued that “adding a contemporary service with white people singing black gospel” music is “pretty funny at times. If you want the black experience in your worship, get black people to do it.”

“Dear white people,” Amantha said, “to worship and witness the same way you did 50 years ago is killing you.”

Friday evening featured a Baltimore Ceasefire march and prayer that included a walk to spots in the city where people have been killed by gun violence. At those locations, the group stopped and prayed, providing a witness to lives that have been lost and a call for peace.