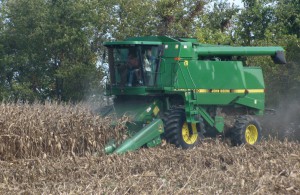 A combine harvests crops on the land surrounding Chanceford Presbyterian Church, creating funds that are put back into the community to help those in need.

At first glance, Chanceford Presbyterian Church located in Airville, PA, is just your average church located among the rolling farmland of southern York County, PA. But a closer look reveals that the fields that surround the church building and adjacent social hall are more than just some local farmer’s crops. They are, in fact, the Lord’s Acre.

Each year, the Chanceford Church, through the congregation’s volunteers, harvests the corn, wheat or soybeans that grow in the fields, selling them to local farmers or “grain brokers.” In return, the money received for the goods is used to support individuals and families in the community and other initiatives worldwide.

“The Lord’s Acre ministry is one of Chanceford’s quiet, behind-the-scenes mission programs,” said Pastor Beth Appel. “It continues year after year with little fanfare, yet generates thousands of dollars annually, which are put to good use in funding both overseas programs like Heifer International and local projects for neighbors in need. People in the community know they can rely on the Chanceford congregation to provide assistance during natural disasters (like a recent flood) and in situations of personal crisis. Families in this community have lived here for generations; they know one another and are committed to caring for one another and offering help when needed.”

The money for the seeds, fertilizer and spray material comes from the previous year’s profits, which is usually around $3,500 but has been as much as nearly $6,000 in years past. 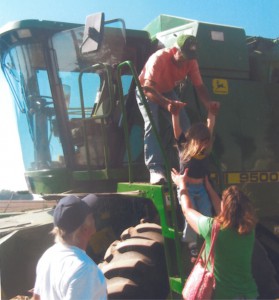 Children were given combine rides during Chanceford Church’s Fall Fest in order to get more people to enjoy the Lord’s Acre ministry.

“We keep that money in the treasury, and whenever anything comes up local or international – we sponsor in the Heifer Project and have sponsored an orphan,” said Bob Jordan, an elder at Chanceford who has been volunteering with the ministry for close to 25 years. “A lot of it we try to keep for local needs, like anything from fire victims to helping people in the wintertime if their fuel tank is empty to the food locker. We donate to the Red Cross and social services. Whenever we hear of a need, we give.”

Some of the funds from the Lord’s Acre used to be targeted for an orphan program the church supported. The money has also stayed even closer to home, helping the church itself when attendance was lacking and offering dollars weren’t enough by itself to keep Chanceford going.

“We have used it to help the church at times when the church income was a little low,” Bob recalled. “Mission starts at home. Right now, we’re pretty fortunate, so it all goes to local needs.”

According to Bob, the Lord’s Acre ministry was started in the late 1950s when Rev. Dunlap started the Men’s Brotherhood group, which came up with the idea of the ministry and was in charge of the efforts behind it. Despite what the name suggests, the land measures almost seven acres, all of which is part of the original church property. Bob and fellow church member Harry Bickle do the majority of the work these days along with the family at the Downs Farms, which also attends Chanceford Church.

Through its volunteers, the church has certainly embraced the Lord’s Acre ministry over the years. In the recent past, the congregation even made the harvesting of the crops part of its Fall Fest, which was a fundraiser to support some remodeling of the church. Bob and others would then allow people to ride in the combine as it harvested the corn. 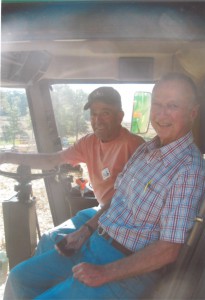 “We’d take them twice around the field,” Bob recalled. “I really enjoyed giving the kids a ride. And a lot of the adults had never ridden in a combine, either.”

At age 72, Bob, who is a farmer by trade, has no plans of slowing down when it comes to the Lord’s Acre.

“As long as the good Lord lets me do it and I love what I’m doing, I’ll keep on doing it,” he said.

It’s been a blessing to both the congregation and the community, and Bob has certainly seen that be the case firsthand. And even when the weather in the area wasn’t ideal for farming, there always seemed to be enough rain and good soil in the fields around Chanceford Church.

“Since I’ve been farming it, I think we’ve been very fortunate,” Bob said. “It seems the good Lord blessed us well with many good crops. Oftentimes we didn’t have as good of crops other places as we did there. We tried to take care of it the same as we do at home, but it just seems like occasionally we got a little more rain over there. It makes you wonder. I think the good Lord has his hands in it.”