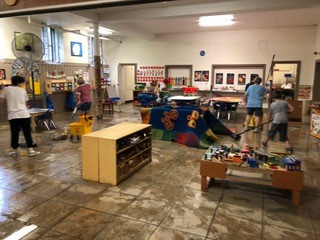 Volunteers help clean up after two storms brought heavy rains to the Wilkinsburg community and flooded out the basement of Second United Presbyterian Church.

About 10 years ago, the Second United Presbyterian Church in Wilkinsburg, PA, (located about 10 miles east of downtown Pittsburgh) experienced severe flooding as water covered two floors of the church building. After that disaster, the church was repaired with different flooring and higher baseboards to prevent similar damage from occurring in the future.

In mid-July, flash-flooding reared its ugly head on the Wilkinsburg community again, and while some of those preventative measures from a decade ago may have limited the damage to the church building this time around, it still left four feet of water in the boiler room and a wake of devastation that ruined everything from preschool furniture to paper goods in the food pantry.

“The first time we had the major flood (10 years ago), it just seemed like a disaster to us,” said the Rev. Deb Warren. “We are a small congregation, and we are in an area that has some economic challenges. We thought that would be the end of the us. But we have carried on from there.”

The good news is that only parts of Second United PC were off limits following the Sunday evening, July 21, storm. Many of the activities were simply moved to the second floor of the church and carried on as normal. That’s important considering the building not only houses a preschool, day care and food assistance center but also English as a Second Langue classes and a local Boy Scout troop.

“We normally have a summer camp going on and a parents morning out program, so that had to be canceled,” said Deb, who is in her 15th year leading the congregation. “There was no electricity in the building. The English as a Second Language classes carried on. Some of those folks were willing to help us. The teachers and camp leaders are doing a great job of adapting.” 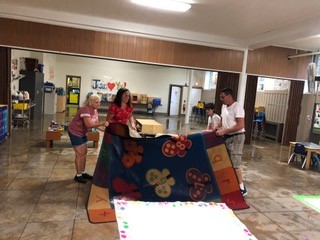 A rug is removed from the basement of Second United Church after two storms left several inches of rain to be removed.

Once power was restored, church members and others who were in the building – including some of the parents and children who came for the camp – used mops to begin the cleanup process. Aside from the four feet of water that had settled into the boiler room, which is located in a swale in the basement, about three to five inches of water had accumulated in other parts of the lower floor of the church.

After four hours of cleanup, just when things were starting to take shape, a second storm hit Monday afternoon, bringing another 4-5 inches of water into the areas they had just spent hours cleaning up.

“We were just getting ready to squeegee, and all of a sudden water just poured in,” Deb recalled. “It came out of every drain and went into the boiler room, the kitchen and the lower areas. But I have a lovely, faithful and resilient congregation and they really worked hard. All of the mud and water is out.

“We host a Boy Scout Troop, and they came Monday evening with Shop-Vacs and helped us clean out.”

It is costing the church over $3,000 to replace the preschool furniture that was destroyed by the flooding, but that doesn’t take into account the rugs and other materials that were also lost. As for the three boilers, since it is summer, they are hoping they will dry out in time to be used this winter, but the extent of that damage won’t be known until they are tested. 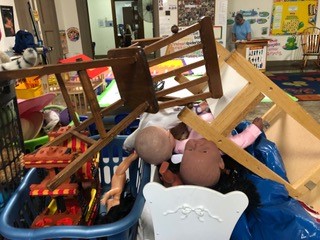 All of the furniture for the preschool at Second United Church had to be replaced after flooding damaged the basement of the building.

The church building sits next to a park that Second United Church has adopted as its own. A community garden is part of the park and is used to grow food for the church’s We Care Food Pantry. There’s also a 20-tree fruit orchard, berry bushes and grape arbor that provides fresh fruit for the pantry as well. On the second Wednesday of the month, the freshly picked fruits and vegetables are available to those in need, and that would be a time when the food pantry would be fully stocked with these goods. Fortunately, the flooding occurred after the second Wednesday in July, thus avoiding a situation that would have most likely resulted in flooded produce that would have had to have been discarded.

If there was ever a bright spot at the end of a wet, muddy tunnel, it was certainly this one. And it’s these gifts of grace that keeps Second United Church going strong in the Wilkinsburg community – despite once-a-decade floods.

“We trust God,” Deb said. “We’re doing good things, trying to be faithful people and are working hard at being good Christians, so we’re just trusting that things will work out.”