Brian McLaren challenges congregations to overcome division with something good 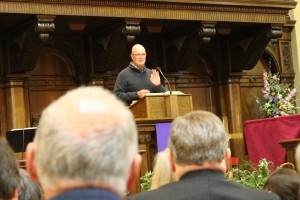 Brian McLaren delivers his keynote address ‘Being Church in a Time of Division’ at the Presbytery of West Virginia’s Festival of Faith in Charleston, WV.

Unfortunately, there has been plenty of disagreement in the church over the years. Everything from slavery to segregation to women’s equality to LGBTQIA+ rights and other social situations have caused separation in the pews. How a congregation can overcome these issues and actually flourish during a time of conflict was the focus of Brian McLaren’s keynote address that kicked off the Presbytery of West Virginia’s Festival of Faith in early April.

Held at the First Presbyterian Church of Charleston, WV, the Festival of Faith is an annual gathering organized by the presbytery’s Nurture Committee that featured 20 workshops throughout the day that touched on everything from moderating session meetings to new treasurers’ training to a discussion about church vitality and resilience.

Brian, who is a pastor and a former English professor, is a leading figure in the emergent church movement. He is a frequent guest on television, radio and news media programs and has appeared on All Things Considered, Larry King Live, Nightline and Religion and Ethics Newsweekly. His work has also been covered in publications like Time Magazine, The Washington Post, New York Times, Christianity Today, Huffington Post and CNN.com, to name a few. Brian’s keynote address centered on “Being Church in a Time of Division.”

“So many churches are just worried about survival, and survival is not a high enough mission,” Brian said. “So, I hope people will leave here with this realization that every one of our congregations can be a school of love where we teach people not only to feel love – I think that’s important – but how to translate love into communication. How do we translate love into the way we try to understand other people and have empathy toward other people? If people leave more inspired to walk in that path, I’ll be really happy.”

Brian said the only thing worse than division is “no vision.” There was certainly division among the north and south churches in America during the time of slavery, but this difference in beliefs ended up being a positive thing.

“The majority of Christian churches in the early United States, if they had had their way, there would still be slavery,” Brian stated. “They were certain they were right – or at least they certainly weren’t going to admit they were wrong. Thank God for division. Thank God for people who had the courage to say ‘We will not go along with that vision for the future. We have a different vision.’”

Brian pointed to I Corinthians 13 (“Love is patient, love is kind”) as a guideline that churches can use in order to have a mindset that will help them in times of turmoil. (“It’s not just for weddings anymore,” Brian said of the scripture.) He recommended that churches instill I Corinthians 13 into their way of being.

“So many people are worried about how to save the church,” he said. “I don’t think the church is worth saving unless our churches become schools of love.” 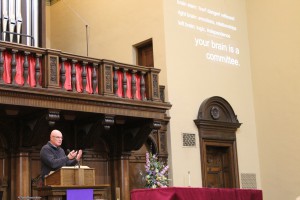 Brian McLaren said, ‘Look at this time of division as an opportunity to look at all of the evil that’s happening and say that we’re going to overcome it with something good.’

Brian dissected the brain, saying that people are wired for division. He said the brain has three sections: the left brain, the right brain and the brain stem. It’s the brain stem that separates humankind from mammals and reptiles because a human’s brain stem has evolved. The stem alerts people to danger and wires us for fear.

“Our brain stem tells us we are in danger,” Brian said, “and we think, ‘We need guns to help us keep safe from danger.’ Other people say, ‘There’s a lot of guns around. I don’t feel safe. We need less guns.’ Both are responding to fear.

Brian continued by saying that division and belonging are closely related. He proceeded to show a graphic that had a church in the middle of CNN and FOX News logos, signifying differences in political views that many people in congregations have. These views can cause division among the congregation and its leaders.

“The people who are members of your church are also members of other communities,” he stressed. “Many of them are more devoted to their other communities than to your community. Have you ever realized how much cable news functions like a religion? People go to your Presbyterian church for maybe an hour a week. A whole lot of FOX News watchers watch FOX News three hours every night. It’s forming them. These people (the show hosts) in their minds have spiritual authority, and the same can be said for many other different groups.”

People believe, Brian continued, that because the show hosts are on television, that what they are saying must be true. It puts pastors in difficult situations when they say something that disagrees with what has been heard by the congregants on television and radio during the week. 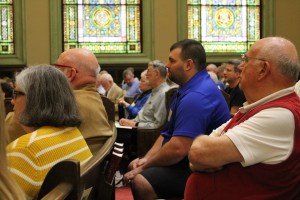 The annual Festival of Faith gathering featured 20 workshops that took place at the First Presbyterian Church of Charleston, WV.

Brian suggested that, in order for churches to be part of the solution, that they need to listen to the word of Paul as written in Romans 12.

“Do not be conformed to this world, but be transformed by the renewal of your mind,” he said. “What this whole thing is about is changing the functioning of our inner brain committee. Don’t be overcome with evil, but instead overcome evil with good.

“Look at this time of division as an opportunity to look at all of the evil that’s happening and say that we’re going to overcome it with something good. When people are at each other’s throats and hating each other, how about we say a basic remedy is to love and we teach people how to love?”

Brian’s philosophy has not fallen on deaf ears. In fact, he was asked by an organization to develop a training of sensible, civil communication for political candidates. He is creating “Common Good Communication,” which has no Christian language to it but has plenty of scriptural support. They are example, humility, empathy, integrity, curiosity, fairness, decency, clarity, honesty and persistence. These values can also be used in places like church session meetings where there is conflict.

“One of my hopes is, in order for us to have better communication in times of Christian division, we can discuss things by conducting a meeting according to the 10 commitments of Common Good Communication,” he said.