What follows is a report from Dr. Georgia Kurko, the executive director of Laughlin Memorial Chapel in Wheeling, WV, which is an independent non-profit organization that’s in partnership with the Upper Ohio Valley Presbytery. Kirkwood Presbyterian Church in nearby Bridgeport, OH, was a partner in helping to acquire the Freedom Grant. 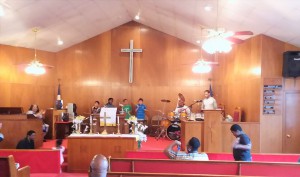 The Young Lions Club at Laughlin Memorial Chapel in Wheeling, WV, is a place where boys in the community can come to learn Christian values and also fine tune their drumming skills.

Laughlin Memorial Chapel used the Freedom Grant money to form a group called Young Lions Club for young men in our community. While the grant was originally intended to be used for teenage males, we requested and received permission from the Synod to lower the eligibility age; we were not successful in recruiting males of that age for the group.

We then invited third-grade through middle-school boys to join. They did! The group averaged six in attendance and combined drumming instruction with Biblical curriculum focused on character-building knowledge. The group used the name Young Lions Club because prior in the history of LMC that group had existed; also in those days YLC was for young men and also focused on drumming skills and Biblical curriculum. (However, none of the boys in the new YLC knew of the old group!) The grant enabled LMC to form a new group, and the participants love being a part of it.

YLC meets weekly, on Thursday nights from 6-7 p.m. Participants remain at Chapel following our afterschool program to be part of YLC. We provide transportation for them to their homes after YLC. The need for this group was twofold, following right along with the intention of the grant: we wanted to create a place for boys to be shaped by Christian mentors with Christian values, and we wanted to create an activity that would engage boys in a positive activity. Our community needs places and activities like YLC in order to keep our young people away from negative activities, and the grant enabled us to do just that for these young men.

The pride the boys show in their mastery of basic drumming skills has made a positive difference in them. Their self-esteem has improved, and they are confident and happy as they practice and perform. Part of the grant money was used to fund field trips to various churches where the YLC put their drumming skills into action as part of worship services. They were invited to participate in a worship service held by the Upper Ohio Valley Presbytery as well as those offered in a few local congregations. They also participated in a Youth Sunday worship service at a local church. These field trips also provided additional mentoring time with their leaders.

As the YLC went out into our community, they brought positive attention to the mission of LMC as well as to the YLC. These events were “win, win, win, win” all the way around.

As the young men were challenged to think and act Biblically in alignment with their studies of heroes in the Bible, they have been taking further steps in their faith development. Appropriately, they have been asked to commit themselves to being role models for younger students – both male and female – in LMC’s programming. The internalization of these Biblical values has resulted in a change in these young men, evident to their mentors and to staff at LMC. As these young men have changed, the community in which they live has been changed. 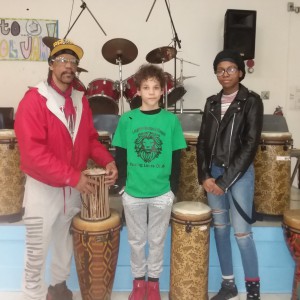 From left, Keith Miller, Malachi Miller and India Davis get set for some practice with the drums at the Young Lions Club.

The results are clear: when we need to speak with members of the YLC about behavioral issues, we can refer to lessons they’ve learned through the classes provided to them through the grant. We have a reference point to use with these YLC members, the Biblical heroes whose lives they have studied in depth. We have seen their growth and can envision their continuing to work with the YLC in the future to teach students younger than they are about drumming and about character and commitment.

Snacks and drinks were provided after practice for the YLC members. These gifts were a highlight for them and a reward for learning and doing their best. Grant money also provided for a small stipend for the co-leaders, father-and-son team Keith and Maurice Miller. Finally, grant money provided for curriculum for the group to be developed; that curriculum is a perennial gift to LMC as we plan to use the Biblical lessons for years to come.

We are challenging participants to continue in the group. We hope to raise funds to expand the group and to continue the excellent work provided by the initial grant money.

We look forward to the day when we can modify and adapt the curriculum to be used in a group like YLC for young ladies in our community. The young ladies at LMC were upset as the group began to find out it was only for young men! We explained; they understood. They, too, need diversion and distraction from negativity that sometimes accompanies free time and boredom.

The grant enabled us to build a strong foundation for this type of enrichment program for our students. We are so grateful!