Paul Wierman, 87, led through his heart (and laughter) 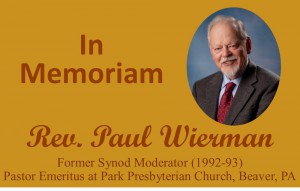 He had a laugh and smile that could overtake a room. And it is that raw emotion, that pure sense of joy that people will miss the most about the Rev. Paul Wierman.

“One of my favorite times of the year,” said Barb Paff, the secretary to the executive presbyter at Beaver-Butler Presbytery, “is when the presbytery office hosts the retired pastors and their spouse for a Christmas luncheon. Laughter fills the office. Paul was a big part of that; he brought joy to each room he entered.”

Paul passed away Tuesday, July 16, just four days prior to his 88th birthday. He was the Synod’s moderator in 1992-93, vice moderator in 1981 and served as a committee chairperson for many years. A member of Beaver-Butler Presbytery, Paul became pastor of Park Presbyterian Church in Beaver, PA, in 1979, served there until his retirement in 1996, and was made pastor emeritus of that church. He also served the Conway (PA) Presbyterian Church, the North Sewickley Presbyterian Church in Ellwood City, PA, and was a very active pulpit supply preacher, filling many of the pulpits in the Beaver-Butler Presbytery.

It was at Barb’s church, North Sewickley, where she became most acquainted with Paul, who served the congregation in retirement.

“I first met Paul when he and Deane Lavender were co-interim pastors of my church,” Barb recalled. “At that time, I was the secretary at the church. We formed a friendship over the time we worked together, which continued to the present. Paul had a way of making everyone feel respected and cared about. He was quick with a hug and smile and a kind word.”

A graduate of Westminster College in New Wilmington, PA, with a degree in psychology, Paul spent the next two years in the Air Force during the Korean War. He then attended Pittsburgh Theological Seminary where he graduated in 1961 with a Master of Divinity in theology and was later named a distinguished alumnus there. He went on to serve the Westminster and Buffalo Presbyterian Churches near Sarver, PA, then Union Church of Murrysville and Heritage Church in Pittsburgh before becoming the associate pastor at the First Presbyterian Church of Delray Beach, FL. His next and final call before retirement came at Park Church in Beaver, PA. 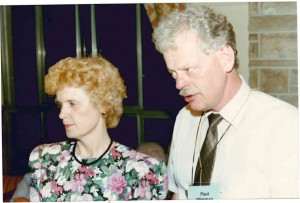 Paul Wierman, who served the Park Presbyterian Church in Beaver, PA, for 17 years, stands with his wife, Lee, after being named moderator of the Synod of the Trinity in 1992.

It was in Beaver that he also grew a strong friendship with Gary Angleberger. Gary, the associate for Communication and Stewardship for the Synod of the Trinity, worked in an office on the second floor of Park Church. He would chat with Paul regularly in those days, and it led to a long-lasting friendship.

“When Paul Wierman passed from this life to the life to be completed in Jesus Christ, I cried and rejoiced,” Gary said during a recent Beaver-Butler Presbytery meeting. “I cried because we shared a calling to ministry shaped by the same era and thus easily shared theological and ecclesiastical views. Being products of the same era, we did not need to explain ourselves to one another. The privilege of easy conversation was a gift, a gift I will much miss.”

Not only was Paul a blessing to congregations in western Pennsylvania, he spread his passion for teaching the Bible around the world. He was part of an exchange program with congregations in Scotland on four occasions and preached while on a mission trip to Brazil.

“Paul seemed to have an unquenchable need to explore,” Gary continued, “to explore the pulpits of Scotland and its people, to explore woodworking and cooking, theology, astronomy and the social sciences as well as the current debates going on in church. Paul never got to the place where he thought he had the one answer. I guess that’s because the God in whom he believed and the Christ who incarnated the life of ‘indwelling spirit’ is always on the move to take us to a place nearer, as the hymn calls it, ‘nearer to the heart of God.’ This is the God in Christ who called Paul ‘in life and in death’ and is now allowing him to taste more fully that promised life about which he preached.”

Paul was also one of the founders of Samaritan Counseling, Guidance, Consulting, becoming the first president of the board. The Rev. Graham Standish, who is the current executive director for Samaritan Counseling in Sewickley and the former pastor at Calvin Presbyterian Church in Zelienople, recalls Paul as being someone very special.

“He’s one of these pastors, that the quality of his character was tremendous,” Graham said. “He and Deane Lavender, who died about three months ago, they were for a long time great voices of wisdom in our presbytery. Our presbytery for a long time had been a very conflicted presbytery, and Paul was one of the people who could stand up and, even though people might not follow him in what he said, would really speak words of wisdom on how to treat each other, how to live with each other and how to be. He was a guy who just had a tremendous passion for compassion and just was always looking as a pastor for how to make people’s lives better.” 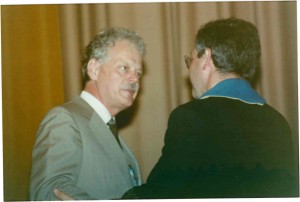 Paul Wierman, who helped start Samaritan Counseling, Guidance, Consulting in Sewickley, PA, receives congratulations after being named moderator of the Synod of the Trinity in the early 1990s.

Paul recognized the need in Beaver-Butler Presbytery for high-quality counseling, especially pastoral and spiritually-based counseling, so he helped start Samaritan Counseling. It has grown from a single location in Park Presbyterian Church to an organization with 11 satellite offices that serves more than 1,500 clients in western Pennsylvania.

“He was everything that’s good in the Presbyterian Church.”

Paul and wife Lee had been married for 61-plus years. Paul had three daughters, one of which is Beth Wierman, the pastor at the First Presbyterian Church of Monaca, PA. He is also survived by Amy Buchwald of Toronto and Kathryn Hayes of Kensington, MD.

A memorial service was held Saturday, July 27, at the Presbyterian Church of Sewickley. An obituary is available here.

The Synod of the Trinity is thankful for Paul’s work and service to the region and sends condolences to his family and friends.