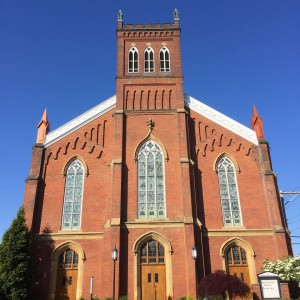 The Presbyterian Church of Cadiz will celebrate its 200th anniversary with monthly events that will look back at 30- to 50-year segments of its history.

In 1817, the Rev. John Rea stood underneath a group of oak trees in what is now Cadiz, Ohio, and preached a sermon to anyone who would listen. From that sermon sprung two Presbyterian churches that would stand a block apart for the next century and a half, sending missionaries to different parts of the world and, just as importantly, reaching out to their own community to provide support.

It’s been a joyous and fulfilling 200 years for the now merged Presbyterian congregation that resides on West Market Street in Cadiz. Because of its past, and since a bicentennial is certainly cause for celebration, the Presbyterian Church of Cadiz is honoring its history with a five-part series this summer that will take guests back in time to relive some of the traditions and legacy of a congregation that still counts 200 people among its membership.

“It’s an exciting time,” said the Rev. Erica Harley. “It’s always fun to learn about where you are.”

Erica, who is in her second year as the head of staff at Cadiz Church, is coordinating the five-part history series that will be held in the evening on the first Sunday of the month from June to October, which translates into Pentecost Sunday to World Communion Sunday. Each service will look back at 30- to 50-year segments of the church and highlight special moments during that time period.

“Each celebration will have a worship segment from what it was like at that time,” Erica said. “We’re trying to do some creative things with worship.”

Communion tokens were brought back for part of Cadiz Church’s 200th anniversary celebration.

The first one on June 4 celebrated the founding of the church and its first pastor, Rev. Rea. The evening included words from Rev. Rea’s own sermons and writings and finished with communion in true 1800’s style, including the use of now-defunct “communion tokens.”

The July celebration will have a “Road to Freedom” theme that will concentrate on the split among Presbyterians over slavery. Featured will be a debate between abolitionists and those who felt that well-treated slaves who were placed into a free world would eventually struggle.

Post-Civil War changes in society will be the focus of the August gathering at Cadiz Church. This evening will include a tour of the local cemetery, which has Civil War-era graves and was also the location of one of the church’s early buildings.

September will consist of the pre-Great Depression period when the church sent 30 members into the mission field to places like Japan and Egypt. One of the congregation’s former missionaries who has served in Egypt and Lebanon will be on hand to tell her story. During that time period communion was regularly served using rice and goat milk, and that is being considered as an option for this celebration. Pew rents were also the norm in the early 1900’s, something that may be brought back for this special service as well.

Also during this era, the church produced its first cookbook, and that 1920 publication will be used to create meals for a potluck dinner, using the exact ingredients as detailed in the cookbook. A grandmother’s diary will also be read to get some unique perspectives on the life of the church during that era.

The final program in the series will include a message from Doug Ronsheim, a child of the church who has gone on to become a pastor. It will also honor the 1967 merger of the Grace and Trinity Presbyterian Churches in Cadiz that formed the current congregation. Bill Hudson, the longtime pastor of the merged church, will be celebrated as well, including through the improvement of a multi-purpose area in the church that will be renamed the “Hudson Room.”

“We want to celebrate the things that we remember,” Erica said, speaking of the October program that will include a catered meal and the commissioning of a painting. “We’re trying to build and build until the final celebration.”

The Cadiz Church is located in the former Trinity Church building. The Grace Church structure, which is currently a thrift shop, was gutted by fire in 1944 but was rebuilt in 1948 and used until the 1967 merger. A tornado in 1954 also caused destruction, knocking out the rear wall and the roof, but somehow the church’s Tiffany window was undamaged.

That good fortunate may have stemmed from a gift from a World War II pilot a decade earlier. In April of 1944, Edward Boatner Cochran was shot down over the South Pacific. In his will, he asked that 10 percent of the money he earned in the service be donated to the church. Although he did not designate a specific use for the money, he asked that it not be wasted but instead “used in the work of the Lord to enrich humanity.”

It was decided that the money would be used for overhead lighting in the sanctuary of the church. At the dedication ceremony, Rev. R.W. McInroy said, “This gift, so sacred to us because of the associations, will especially not be wasted if we turn our thoughts to the Christian young man whose deed is a guiding light to us. And, may the lights remind us of Christ, the ‘Light of the World.’”

Rev. McInroy was also a leader in establishing Camp Presmont on Piedmont Lake where youth come to learn about Christian love and teaching. That type of youth outreach was mirrored by the Cadiz Church through an after-school homework club it hosted over the years. This summer, a youth lunch program was started as another way to fulfill its community outreach initiative.

“Many people in the church have been involved in civic activity around the community through the years,” Erica added.

Cadiz Church is also known for having a traditional worship service on Sunday mornings, something that is not the norm in this small Ohio town.

“Cadiz is the only local church of any persuasion that still has a traditional worship,” Erica said. “The folks there are pretty proud of that. They value the traditional service, and they value community involvement. They are a little different than the community around them.”

And that’s a good thing. It’s created a relationship with a congregation that has withstood many hardships and events to prosper and thrive 200 years later.

“As you look at the history of the congregation, God’s hand is evident,” Erica said. “Our past sprung up under a grove of oak trees. It has not been without struggles, but they continue to thrive as faithful people. The Holy Spirit makes that happen.”