East Liberty Church steps out to become a sanctuary church

For several years, Marie Elena Esquivel and members of her family have been attending East Liberty Presbyterian Church in Pittsburgh. So, when a situation arose regarding the safety and welfare of one of them, the church’s leadership was quick to step in. 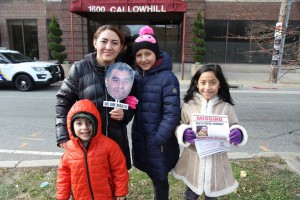 The wife and children of Martin Esquivel-Hernandez take part in a rally in Pittsburgh to “Bring Home Martin.” While Martin was living in Pittsburgh, East Liberty Presbyterian Church was preparing to be a sanctuary church to keep him out of harm’s way.

In April of 2016, Marie Elena’s son, Martin Esquivel-Hernandez, was pulled over by local police in nearby Mt. Lebanon for having a broken tail light. (A later inspection of the vehicle did not show any damage to the tail light.) Despite having a valid international driver’s license, Martin was ticketed and fined for not having a U.S. license. Martin eventually paid the fine, but a short time later during an early-morning raid, U.S. Immigration and Customs Enforcement (ICE) broke down his door and took him into custody for being an illegal alien from Mexico. It was the third time he had been arrested for being in the U.S. illegally.

The Rev. Randy Bush, senior pastor at East Liberty; the Rev. Patrice Fowler-Searcy, associate pastor for Mission Ministries; and other church members worked to get Martin released from prison. Their plan was to make East Liberty Church “a sanctuary,” meaning that it could provide safe housing for Martin in hopes of keeping him out of jail. However, Martin was deported to Mexico City after he was detained and has remained in his home country ever since.

“They are God’s people,” Patrice said when asked about the decision to have the church support someone who is in the U.S. illegally. “From our perspective, we’re all here illegally. I’m black, of African descent. As I get older and learn more about the atrocities that occurred in the United States of America, all of this rhetoric that has become so prevalent within this society that people need to go back to their countries, well, that begins with the Europeans. Go back to your countries.

“We are committed to loving all of God’s people without judgment. They (the Hernandez family) were in our midst, a part of our congregation, and so we’re going to support them in spite of the fact of how they got here. They’re here. God doesn’t tell any of us to qualify what we do for God’s people. God just says, ‘Love my people, feed my people, love my people,’ and that’s what we try to do.”

Randy pointed to the governmental system that’s in place as the reason so many refugees are facing similar situations as Martin.

“There are over 2 million people seeking legal immigration who are currently in the country,” Randy explained. “We only process about 20,000 a year. So, the problem is we have a structure in place that intentionally and willfully keeps families separated. The issue is a fundamental flaw in how we treat all the immigrant community. A significant portion of the current immigrant community in America has been here for more than 10 years, and in many cases more than 20 years. That means they have been working, they have been paying social security, they have been a part of our communities even though they themselves will not benefit from social security and the other resources that citizens receive.”

A Methodist church in Philadelphia that has become a sanctuary church was the focus of a segment on 60 Minutes. Click here to read about that situation.

A year after Marie Elena began coming to worship at East Liberty Church on Sunday mornings, Martin, his wife and three kids, all of whom had recently relocated from California, began attending with her.

“They were integrating into the life of the church,” Patrice said of Marie Elena and Martin’s family, who were eventually followed to East Liberty by Martin’s brother, wife and five kids. “The grandchildren started coming to our Hope Academy, a program of music and the arts for children on Saturdays.”

With Martin in jail, his family suddenly lacked a financial provider. When East Liberty heard of the situation, it made attempts to free Martin from custody.

“The church community in Pittsburgh really came together from a variety of denominations as well as the Latino community in the city and other advocates to advocate on his behalf,” Patrice said. “We wrote letters, we held protests at marches.” 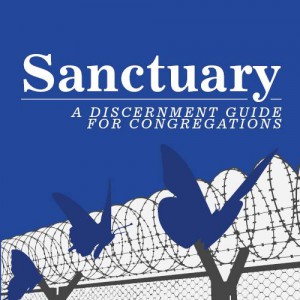 Martin, who was an activist for the Hispanic community in Pittsburgh and led a march the day before he was detained, was charged with not having a valid driver’s license, not for the alleged broken tail light. (“His initial arrest was probably profiling,” Patrice speculated,” because what he was ultimately charged with was driving without a valid driver’s license, which they would not have known had they not stopped him. The pretense under which they originally stopped him was proven to not be true.”) A lawyer suggested that Martin accept a plea bargain in which he would agree to a misdemeanor charge instead of a felony charge that would result in his immediate deportation.

Upon the guilty plea, the church was preparing to receive Martin as part of a movement to become a sanctuary. To be a sanctuary, the entity has to publicly declare that it is a sanctuary and must alert authorities if it is housing someone. Police agencies are still able to enter the building and apprehend the person being cared for, but a court order is needed to complete the process.

“He would have been housed here in our church in a safe space until it was safe for him to leave the church,” Patrice said. “Sanctuary, we’re learning, is the last resort for protecting a person because even though you are safe in the church or whatever the sanctuary space is, you are basically a prisoner here, too.”

Randy added, “If the police are going to profile them and then remand them to Immigration Customs, then their biggest risk is to drive to work or drive their kids to school or to drive to a doctor’s appointment or go to the pharmacy to get a prescription or go to the grocery store. Their daily lives are imperiled in ways that most people just take for granted. Literally, people have to establish a Power of Attorney in case the kids are in school and the parents are picked up and whisked away.”

Once arrested by ICE, a felony charge was brought before Martin in court, which he refused to sign, thus landing him back in jail. Martin had been detained in a facility in Youngstown, Ohio, but following the court case, Martin was moved to a detention center in Detroit, making it even harder for his children and other supporters to visit.

A few months later, Martin again found himself in court, but this time he was given an opportunity to agree to a misdemeanor charge. Feeling that it would result in his ability to stay in the country, he signed it. However, he was immediately taken back into custody and soon thereafter deported back to Mexico City where he is living with relatives. Because he had served in the military, he is at risk there.

“It’s been disappointing that despite the community advocacy and the wide support base that the system itself showed no flexibility in this case,” Randy said. “It’s also sad because his case is not unique. It’s not that Martin was totally different from others. The way he and others are treated is the real problem.”

Martin’s youngest son, who was born in the United States and is thus a U.S. citizen, is now living with Martin in Mexico. East Liberty Church purchased a passport for the son to make that happen.

“Our congregation has continued to rally around his family,” Patrice said. “We have helped them financially, although they don’t ask for much. One of the other organizations that has been helping them had to secure different housing for them because all of the authorities knew where they lived. So, to keep the rest of them safe, new housing had to be found. 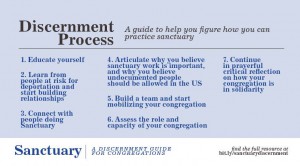 “Our support is really more spiritual and communal rather than financial. These are folks who don’t ask for anything, and when they do, you know that their backs are against the wall and they really need it.”

Patrice admitted that there were some people who were concerned with East Liberty stepping out as a sanctuary church. However, she said the questions weren’t related to harboring an illegal citizen but instead about the legality of the church’s stance in this situation.

“The Martin case has spurred our congregation and many other congregations to be better informed about the issues around sanctuary,” Randy added. “We’ve been working with a group doing listening sessions, finding out how the larger church community can accompany and be supportive of the undocumented immigrants in Pittsburgh.”

Randy has been aware of attempts to have Martin moved to Canada. The hope is that if Martin can get to an American ally, his family could join him there or it could eventually lead him on a path back to Pittsburgh.

“We believe God led Marie Elena here because God knew that we would care for them, wouldn’t judge them and wouldn’t alienate them,” Patrice said. “She and her family are very much a part of this congregation. God works in mysterious ways, and God’s thoughts and ways are higher than our thoughts and ways. God sent this family here, and we have just surrounded them with our love.”

Is God nudging you or your congregation to reach out to someone?

How would the calling to be a sanctuary church effect your congregation?