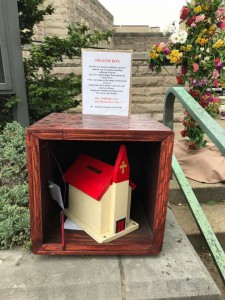 This prayer box at Bream Memorial Presbyterian Church allows the congregation to stay in touch with the needs of the Charleston, WV, community.

Having the back doors to Bream Memorial Presbyterian Church in Charleston, WV, open on a Sunday morning was a staple of the congregation. It was an invitation to the community that anyone was welcome to come in off the street and enjoy a worship service. It also let people know that Bream Memorial was an active community of people.

In recent years with a change in pastors, those doors have remained shut on Sunday mornings, and some members of the congregation wondered if the community realized that Bream Memorial was still functioning. It was just one concern that was brought to the Rev. Christina Tutterow when she began her interim pastorate at Bream Memorial a year ago.

“What can we do for people outside the walls?” Christina said, recalling a conversation with member Dennis Hudson. “We have all of this need out in our community and we’re not doing anything.”

Realizing Dennis’ passion, Christina quickly made him the chair of a new Community Care service group at Bream Memorial. And Dennis didn’t wait long to get going. He searched the internet looking for ideas of ways to connect with the community and saw some congregations had prayer boxes on their properties for the community to drop requests into.

“There’s a lot of people, not only homeless people, but a lot of people that walk by and are scared to come into the church or think it’s too big or we’re too good for them, which isn’t true,” Dennis said. “They need prayers, too, so we’ll go ahead and build a prayer box.”

Dennis decided to have the church’s “master carpenter” Hugh Breedlove construct a miniature church building to be placed on the property for the community to deposit prayer requests into. The mini-structure is housed in a box so that it is protected from the weather.

“Nobody knows that we’re here and that we care, and this is just one little sign that we can show them that we care about what’s happening in their lives,” Christina remembers Dennis saying.

The first Sunday there were 11 slips of paper in the Bream Memorial prayer box, and that number has remained steady over the course of the first three months. The prayer requests are read every Sunday morning when Christina reflects on the “prayers for the people.”

“It didn’t only help the people outside,” Dennis said, “it helped a lot of the people inside our church as well because a lot of times they’ll be reading the prayers and you can see people tearing up, so they know that there is a need out there for it. That really touched me more than anything, to open everybody’s eyes.” 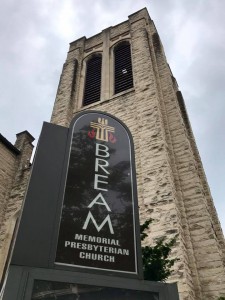 “The congregation has just really responded to it,” Christina added. “I think they look forward to every Sunday hearing what it is that the people out on the streets need from us, what kind of concerns they’re lifting up. It’s been really foundational as far as us deciding what our mission’s going to be as we move forward.

“What are the concerns in this community that we can address that we haven’t been? It’s been a monumental response here from the congregation.”

The requests vary from personal health and welfare concerns to global issues.

“We have one gentleman that writes to us every week and his concern is for unborn children and animals,” Christina remarked. “And he’s evidently got three cats and so he’s always asking for prayers for his three cats. There’s also a lot for drug addiction and homelessness.

“It’s a little bit of everything. Some of them have been prayers to find Jesus. It’s not prayers for themselves, it’s prayers for their neighbor. It’s been wonderful to hear all of the concerns out there.”

The prayer slips don’t ask for contact information from the author, but many have done so anyway, enabling the church to reach out to them and follow up to let them know that they are being prayed for. The prayer slips invite those submitting prayer requests to join the congregation in worship on Sunday mornings, but it is unknown whether that has resulted in any new attendees.

“We’re just trying to let everyone know that we’re still open and that we care about everybody,” Dennis said.

The church, which recently started a Wednesday brown-bag lunch in the church’s breezeway for the community, has also created an email address (BreamCommunityCare@gmail.com) that people can use to submit prayer requests. It’s all part of a new focus toward community outreach at Bream Memorial.

“This has been really significant to us to say, ‘We’re looking at our future now.’ Even though we haven’t had any real discussions about it, we’re seeing it. I think that’s God at work in this place, stirring their hearts. We’re here in this part of Charleston that isn’t the best place to be because there are issues, there are a lot of homeless, there are a lot of drug addicts. It’s not that nice, comfortable neighborhood that they used to be part of, but we need to figure out how to be part of this community and I think that’s been God’s way of really shining a light on them, saying, ‘You are part of this community, you just need to step out and start doing.’ That’s the nudge of the Spirit.”