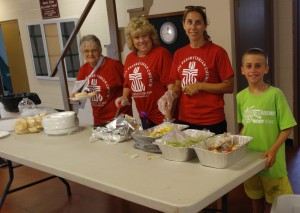 A handful of volunteers from Pennside Presbyterian Church hand out lunches to children four days a week at a local childcare center.

Realizing there was a need to feed children in its community, the session at Pennside Presbyterian Church in Reading, PA, decided to start its own meal program. After two years of discussions and planning, the church became a location where youth could come and eat lunch for free. Brimming with anticipation, it kicked off its feeding initiative in early June.

“We were expecting 50 to 100,” remembered the Rev. Dave Duquette. “The school district sent flyers home and emails, and they have one of those mass phone system programs… We had signs made up that were put around the community.”

Despite all the prep work, only one child showed up during the first full week of Pennside’s summer meal program. Undoubtedly discouraged by the lack of participation, the volunteers didn’t quit. They quickly latched on to a nearby childcare center and have been serving between 30-40 meals a day four times a week ever since.

“It’s been a real exciting program,” Dave remarked. “It’s been great to watch a few of my leaders really, really step up.”

Two years ago, a newspaper article detailed the percentage of students in Berks County who are on the reduced-priced lunch program. While the inner-city Reading School District not surprisingly came in with the highest percentage of students receiving assisted lunches, Antietam School District was second at over 51 percent. With many of Pennside’s worshipers living in Antietam, it came as a big surprise to the church’s leadership that so many of their own families were living in poverty.

“That was a really eye-opening thing for us,” Dave said. “We started talking a little bit about it, sharing the concern. There are 1,100 kids in the district, so we’re talking about 550 kids potentially on this program.”

After speaking with the staff of a state senator, Dave was directed to the U.S. Department of Agriculture’s National School Lunch Program, which provides opportunities for organizations to become either a sponsor or site for areas where free lunches can be distributed. Those organizations that are deemed “sponsors” receive payment from the Department of Agriculture for supplying the food and resources for meal programs, but it also comes with plenty of paperwork. Meanwhile, “sites” simply distribute food that has been prepared for it. 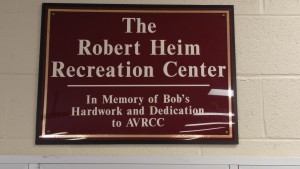 The center where the childcare program is located is named after a deceased member of Pennside Church who was a dedicated community leader.

Learning that the Reading Recreation Commission was already a “sponsor” for the program, Pennside Church decided to team up with them to create what Dave calls a “Let’s Do Lunch” program. When its initial attempt didn’t gain steam, it found out that the Antietam Recreation Commission holds a childcare and that church volunteers would be welcome to help hand out lunchtime meals at that location.

Dave speculated that because many of the children they were targeting were already enrolled in this childcare program, they weren’t able to turn out for Pennside’s attempt at a meal service program. So in essence, the church volunteers are connecting with the children – mostly elementary-school-aged – just in a different location than they originally planned.

Between 50-60 total children are enrolled in the childcare program and previously had to bring their own lunches with them on a daily basis. But thanks to Pennside’s help, the children who need the free lunches can get a nutritionally-balanced meal four days a week. And because the school district has over 50 percent of its children enrolled in the reduced lunches program, a child does not need documentation to partake of the meals, making it easier for those who need a lunch to get one.

A handful of Pennside volunteers assist in dishing out food Monday through Thursday, and it’s a different group each day from June to August. The program encompasses close to 30 total people from the congregation and the broader area.

“It’s a nice community partnership effort where the church, the school and other agencies all kind of pull together to feed the kids,” Dave said. “One of our folks talked about how the children are very polite. They’re saying ‘please’ and ‘thank you,’ and that’s not the narrative that you hear about young people today.”

Despite its inauspicious beginning, Pennside Church’s involvement in this worthwhile community event is paying big dividends.

“It’s been really inspiring,” Dave admitted. “We read the article and got a sense of the need and it was overwhelming. Just think about feeding 500 kids. Just think what that would take in time and money we don’t have. Now we are feeding these kids and we’re not paying a dime. It’s been a very powerful witness to all of us of the abundance of God.

“Just the way doors opened was very inspiring. The way God has led us has been a real journey through the wilderness kind of thing. The manna is being provided along with God’s goodness. It’s been an amazing experience.”