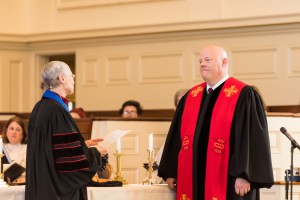 There’s a reason a pastor’s position is referred to as a “call.” Generally, there is something that pulled or spoke to him or her that is leading them in a specific direction. In the case of the Rev. J.C. Austin, there were several things that led him to apply for and eventually accept the lead pastor’s position at the First Presbyterian Church of Bethlehem, PA.

“I had left Auburn (Theological Seminary), was doing my own consulting work and found out about this through word of mouth,” he said. “I was really stunned by the uniqueness of the situation and the way that matched up with my own sense of call and gifts. The way in which all that aligned for me was really powerful.

“I had a couple different opportunities I was considering at the same time and they were all compelling but this one was the one that I felt very clearly was where I was being called to go. I haven’t had a moment’s doubt of that since then. It’s been really powerful and, frankly, a real blessing for me as we have gone through some difficult times together already in the four months of the aftermath of the split.”

The vote caused a division in the 140-year-old congregation, with both the PCUSA and ECO worship groups feeling they were the rightful owners of the 31.5-acre property. Both groups continued to worship there as a year-long court case played out in the Northampton County judicial system. In December of 2017, a judge ruled in favor of the PCUSA and its worshipers, and in late January of 2018 when the ECO faction decided not to appeal the ruling, the PCUSA contingent could finally exhale and begin to put its pieces back together.

One of those pieces was calling a new pastor to replace the Rev. Bill Hess, a retired minister who had been called to lead the PCUSA congregation as an interim after the split. J.C., who had been a vice president of Auburn Theological Seminary in New York City following service as an associate pastor at Madison Avenue Presbyterian Church in the Big Apple, heard of the opening and threw his hat into the ring. 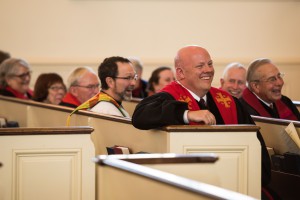 J.C. Austin hopes there are happier days ahead for the congregation at First Presbyterian Church of Bethlehem.

“I spent the last eight years at Auburn Seminary doing congregational leadership development with pastors and other faith leaders,” J.C. said. “One of my specialties was on leading change and innovation, both in start-up congregations and existing traditional ones. I started realizing that this congregation was kind of the best of both worlds. It had a lot of dynamics of a start-up, yet at the same time there was a group of people who were deeply connected to one another and committed to a common vision of community in this congregation that went back to 1875 in terms of their history to the community.”

Having been a member of the First Presbyterian Church of Allentown in Lehigh Presbytery as a child, J.C. was familiar with the area, giving him one more reason to feel drawn to the opening in Bethlehem. J.C. was eventually selected and started Nov. 27, two weeks before the court ruling.

“I’m somebody who sees opportunity in the midst of conflict,” J.C. said. “Conflict often surfaces things that need to be dealt with and were being avoided before.

Because of the situation that has left people who once worshiped closely together now attending totally different churches, the PCUSA congregation needs to go through the proper channels to be able to move forward.

“There’s still healing to do from the split,” J.C. said. “There were long-term relationships that were severed. This is a congregation that put a high premium on small-group ministry and on community within that. It was a real leader in that work for decades. A split was particularly difficult because it was such a relational congregation in that sense.

“There are literally families that are split on it. Parents and children, spouses from one another on each side. There’s some real pain in the midst of that that’s going to continue to need to be healing.” 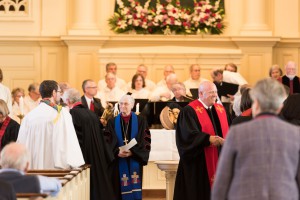 J.C. Austin greets the congregation during his installation service at First Bethlehem in March.

The size of the property is another challenge that has risen following the split. The building would see an average attendance of over 1,000 people on a Sunday morning prior to the division, and there was more than enough office space available to accommodate staffing for that congregation size. With hundreds of people deciding not to follow either congregation after the split and the weekly attendance now in the 250-300 range for the PCUSA group, the building has excess space to manage.

“How can the church be a really good steward of that space?” J.C. questioned. “How does the space continue to serve the mission and ministry of the congregation, and how do we not get swallowed by it until we’ve grown back to the level where we can fully inhabit it?”

First Presbyterian Church is now offering two services on Sunday mornings, something it wasn’t permitted to do when the ECO congregation, which is now calling itself Grace Church Bethlehem and is meeting in an adjacent property at the Bethlehem Catholic High School, was worshiping there. A youth program is in development and a Sunday School has also been started in recent months to help with the rebuilding process that received a huge shot in the arm on Easter Sunday when nearly 700 people turned out for the two services.

“It’s really taking off in all kinds of amazing ways,” J.C. said. “This congregation is extremely optimistic and excited about where the future is taking us.”

There are still several obstacles to overcome and plenty of mending to occur, but this new journey that First Presbyterian Church of Bethlehem is on is one that is both exciting and uplifting for a congregation that has been through plenty in the last two years.

“We don’t know what’s necessarily around the corner, but we know that we’re on the right track,” J.C. concluded. “We know that we’re not just feeling our way through this but are really being led by the Spirit. That’s part of what is so great about where we are is not necessarily having everything figured out. That’s liberating on some level.”