Since 1958, Camp Donegal in Airville, York County, has been the summer home for kids and teens in the Presbytery of Donegal. That distinction won’t change in 2017, but a streamlined schedule and new leadership will greet campers this June and July. 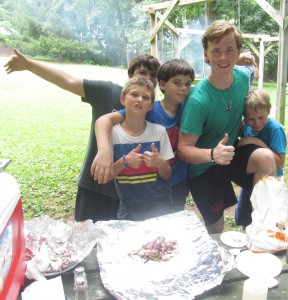 Campers will still be able to enjoy Camp Donegal in 2017, but the camp will be under the care of Krislund Camp and Conference Center staff this summer.

A steady decrease in campers caused the presbytery to review the camping ministry at Camp Donegal in 2016, and at its November meeting, the presbytery approved “a plan for a new future.” The plan includes a partnership with Krislund Camp and Conference Center, which is located in Madisonburg (near State College, PA) that’s affiliated with the presbyteries of Carlisle, Huntingdon and Northumberland. In 2017, a four-week summer camp season for the Presbytery of Donegal will be held in Airville with Krislund providing the staff and programming for it.

“We are moving into a new future,” said the Rev. Erin Cox-Holmes, the Executive Presbyter for the Presbytery of Donegal. “The reality is that for one presbytery to operate a camp by itself is a major stretch for that presbytery. Our camp is more rustic, which means that we have been facing many challenges in the operation of our camp, some of which have to do with kids who are choosing more specialized camps and some of it having to do with many of our churches having an aging population and there are fewer children available for the summer camp population all together.”

The plan calls for a three-year partnership with Krislund that will be “evaluated rigorously” on a yearly basis by the Presbytery of Donegal and Krislund. At the end of those three years, a decision will be made on camp operations for the future.

The new plan also resulted in the elimination of the Camp Director position at Camp Donegal. That means that Amy Wade, who has held that role for the past 21 summers, will no longer have the camp as part of her routine. The camp is something she first became acquainted with as a teenage camper in the 1970s and continued with as both a mission trip leader and cook before being asked to be the Camp Director in 1996. 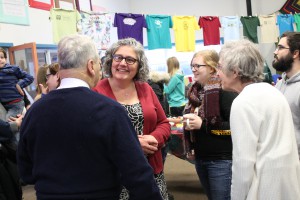 Amy Wade, the Director at Camp Donegal for the past 21 summers, was the focus of a gathering at the camp in January in honor of her years of service there.

“What I’ll miss are the relationships,” Amy said. “Incredible relationships have formed here, that God has formed here over the last 20 years of my ministry. Some of the people were campers of mine as children, and then they were staff people as counselors and they continued on as chaplains and volunteers for the camp. They are truly people that I have watched grow up here at camp and into adulthood.”

“An advantage is that we can team up and share staffing,” Erin explained. “Our camp will be operating on the weeks when Krislund’s camper numbers will be less so between us we can maintain a very high-quality summer staff that will be serving in both locations over the summer. It lets us combine our traditions with the expertise that Krislund has to bring, allowing for the opportunity to develop a high-impact, high-energy camp that has the opportunity for growth over the next several years.”

Something new for Camp Donegal is hosting is a day camp that will serve as quality daycare with pickup sites in York and Lancaster counties. Parents can drop off their children at 7:30 in the morning and pick them back up at 5:30 p.m. at these sites, from which they will receive transportation to Camp Donegal. This will be available during the four weeks in which the camp is open in June and July.

During the weeks when it is not open, the camp can be rented with housekeeping and cook services available. Also, in looking to involve more people with Camp Donegal, Erin didn’t rule out the possibility that the camp could partner with other presbyteries in the region, like Baltimore and New Castle of the Synod of the Mid-Atlantic.

While the future of Camp Donegal is cloudy, the past has been a blessing in part due to the tireless work of Amy. Erin was quick to praise Amy for her time and commitment during her long tenure with the camp. 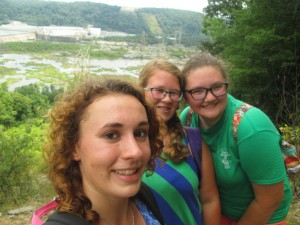 Campers take a selfie with Camp Donegal as the backdrop.

“Amy has been a beloved camp director for 20 years with a total of 31 years of involvement with Camp Donegal,” Erin said. “She has single-handedly kept camp operations moving forward and has created a safe-family environment that has made a difference to hundreds of campers and young-adult staff members.”

Amy estimated that summer enrollment at Camp Donegal was in the upper 300s when she started two decades ago, and Erin said last year’s participation had dropped to 236 – which is roughly the number of campers that attend Krislund in a week. Amy admitted that she has seen a distinct shift in the fabric of Camp Donegal, especially since the terrorist attacks of Sept. 11, 2001.

“2002 was when the biggest shift occurred,” she said. “After 9-11, the people just simply did not send their kids away as much and numbers really dropped off after that. I remember we talked about nesting and sheltering kids at home in those couple of years after 9-11, and they (the numbers) just never really swung back up.

“The biggest change that I have seen has been in the diversity of the campers and staff,” Amy continued. “When I was here as a camper and starting out on the staff 25 years ago, the vast majority of our campers and staff came from the churches of the presbytery. I would say it’s closer to half or less than half of our campers now come from our churches. More come from the community or through social services agencies. It’s just a much more diverse population in terms of campers. In terms of staff, very few of our staff comes from churches. Over the last 7-8 years we have incorporated international staff as well.”

Amy reasoned that churches as a whole have fewer and fewer youth to attend the camp these days, thus causing the decrease in presbytery-affiliated representation, and the larger churches already have summer programs in place for their youth to be involved with.

While camping has been a part of Amy’s life for 31 of Camp Donegal’s 58 years of existence, she is ready to put that part of her life behind her and reach out for something new as she goes forward. 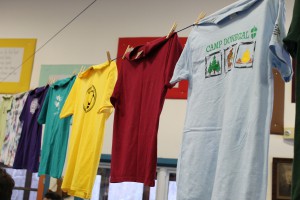 Camp T-shirts reflect the many memories that have been experienced at Camp Donegal throughout the years.

“I have used up my camping energy and my love and my passion,” Amy said. “I still love and support the ministry but it’s not where I feel God is calling me any longer. I need to discern where that is and I’m just not sure right now. I’m not sure how to identify myself right now because for 20 years the first thing out of my mouth is ‘My name is Amy Wade and I’m Director of Camp Donegal.’ It’s time for the camp, but it’s also time for me personally, to move in a new direction.”

Regardless of where Amy’s future takes her, she will never forget the hot, steamy and tiring summer months she spent in Airville, PA, and will look back on them fondly.

“I absolutely love summer camp,” she said. “I love the intensity of it, I love just how hard it is but how rewarding it is as a staff person. What I won’t miss is sleeping in my clothes all summer because if I get a phone call in the middle of the night I can just get up and go. I won’t miss the exhaustion of it, but I’ll miss the exhaustion of it. Summer camp and the people are what I’ll grieve and I’ll miss. Testing the water, unclogging toilets, cleaning the pool, I’m not going to miss any of those things, but the people and ministry have been such an essential part of my life.

“The blessing of this is that you do see God every day. A lot of it is learning to be open, learning to listen and to look, learning to love no matter what even when you really don’t want to, continuing on when you really feel like you don’t have any more in you. God has just been in all of this since day one. I have seen God working in my life, but I also have the absolute privilege of seeing God work in other people’s lives. It really, truly has been 31 years of absolute privilege to be involved in this ministry.”