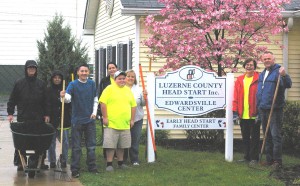 This crew from Church of Christ Uniting did some landscaping around the Luzerne County Head Start Edwardsville Center, placing mulch and flowers around the outside of the building as part of its “Church Without Walls” Sunday.

What does “church” look like? These days, everyone has a different answer to that question. One Sunday a year, Church of Christ Uniting in Kingston, PA, starts out like most other congregations with a service in its sanctuary, but after that it transforms itself into an army of workers and volunteers who envelop the community equipped with hammers, brooms and paint brushes.

Called “Church Without Walls,” this annual community service project puts close to 70 of its worshipers into the streets working on everything from spring cleanups to painting to a sing-along at a retirement community. Another 75 workers stay at Church of Christ Uniting (COCU) and quilt, make cards or construct kits for a local women’s shelter or children’s mental hospital.

The “Church Without Walls” initiative is just one of many outreach programs going on at COCU these days. It also has a food pantry, a Meals on Wheels program that operates out of the church and Head Start classrooms that help meet the social and health needs of local preschool-aged children from low-income families. The congregation’s mission focus has been part of the church since Kingston Presbyterian Church merged with First United Methodist Church of Kingston in 1972 following the devastation caused by Hurricane Agnes. The two congregations shared leadership during the summer months and came together when waters destroyed both of their buildings.

“When we got the churches together our theme was ‘Merge For Mission,’” Carol recalled. “They felt that you shouldn’t be spending all of your money on church buildings and your own programs and doing things like that.”

The day opens with a 30-minute service in the building before everyone goes their separate ways. The first year the church invited everyone back for a wrap-up type meal and service, but very few people returned after a hot day of working around the community, so that idea was scrapped. 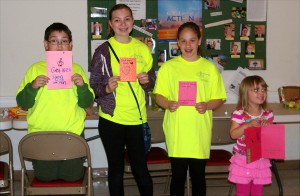 People within the church research the community to come up with the projects for the mission work. The city council is also contacted for work ideas. During the 2016 “Church Without Walls” initiative, five projects in the community were targeted and two other programs were the focus of in-church work.

“We usually do seven or eight projects,” Carol said. “Each committee is supposed to research one to find out what’s needed and get us going on that area.

“We have regularly gone up to Wesley Village, which is a Methodist retirement nursing center home, and our choir and organist go up there because we have members who are up there, too. People who don’t want to do heavy lifting work, they sometimes migrate up there for the morning and provide a fellowship hour afterwards as well as doing a service for them.”

A Habitat for Humanity project is regularly among the scheduled events during “Church Without Walls,” and that one takes place on the day before because Habitat for Humanity doesn’t work on Sundays. That brings up an interesting question regarding working on the Sabbath Day.

“Liturgy is called the work of the church,” Carol explained, “and so the work is not just in the building, it’s outside of the building, it’s the church in the community. We don’t see it as a conflict of that. That’s when the church meets, so it’s the easiest time to get everyone together. It just has worked better to do it on a Sunday. Plus, the imagery of – you’re worshiping, you’re in church, but it’s not limited to the church building. If you did that on another day it wouldn’t quite have the same symbolism.”

The “Church Without Walls” program at COCU has only been running for four years and has fluctuated between being held in the spring, summer and fall. The last two years it’s been in May, a time that seems to work well with both the church volunteers and the community. A Methodist church in the Kingston area had been doing a similar “The Church Has Left The Building” mission project and COCU decided to hold its own in 2013.

Because of the success of the program, members at COCU have asked to do “Church Without Walls” work more than just once a year. While Carol feels keeping it annual is the right way to go, the effects of the mission work are long-lasting.

“It’s really caught on and it’s something that people have a lot of fun with,” she said. “It also builds community. The benefit for our church is when people are out working together they’re talking together, they’re sharing together in a way that they don’t when they’re sitting in the pew next to each other. That’s been a big benefit for us.” 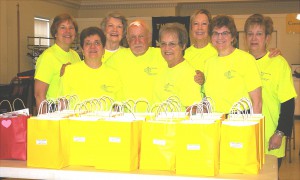 These people put together spring “Pick Me Up” kits for Ruth’s Place Women’s Shelter containing toiletries and cosmetics for “Church Without Walls” Sunday in May.

The church does advertise their “Church Without Walls” Sunday and does get some extra volunteers from around the community. But it’s only a handful of people and hasn’t affected the overall attendance of the church in any way.

“It’s not exactly an evangelism tool,” Carol admitted. “It makes people more aware of our church in the community, but it hasn’t led to huge numbers or members. We wear really ugly, bright yellow T-shirts with our logo on it. Part of it is we’re advertising our church. They see us on the streets.”

And being on the streets is something Church of Christ Uniting feels has been part of its calling for close to 45 years.

“The Holy Spirit sends you out,” Carol said. “That’s what the church is to do. In my meditation (before going out) this year it was, ‘When did we see you hungering and thirsty and naked and sick and visit you and serve you and give you a cup of cold water.’ That’s the motivation. That’s the call.”