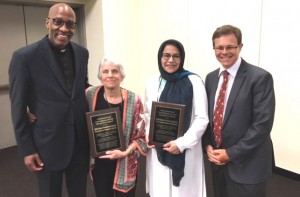 Incidents of race, bias and hate are in the news every day. It’s not something new that’s occurring in the world, but it seems to be more prevalent these days following the events of Sept. 11, 2001, and going as far back as the Civil Rights Movement of the 1950s and ’60s. Plus, inventions like smart phones and social media make it easy to capture an incident and share it with the rest of civilization, thus heightening tensions involving whites, blacks, police, Muslims and the LGBTQIA community, just to name a few.

In 2008, the Community Responders Network (CRN) took root when a small interfaith group met at Market Square Presbyterian Church in Harrisburg, PA, to grapple with the question, “How can we as a community respond to acts of hate and intolerance?”

“The goal is to respond to bias incidents in the community,” explained Margee Kooistra, a former chair of CRN. “Instead of just responding, we realized we needed to get to the root causes and educate people with regard to celebrating diversity, understanding our differences and working together in community so that we have fewer bias incidents and fewer people who feel as though they are on the outside rather than a significant part of the community.”

Margee, a ruling elder at Market Square Church, along with Farzana Safiullah of the Ahmadiyya Mosque and representing CRN, received an award on behalf of Market Square Church and CRN at the 223rd General Assembly of the Presbyterian Church (U.S.A.) in St. Louis in June for the collaborative work the group has been doing. The Ecumenical and Interreligious Service Recognition Award was presented by PCUSA Stated Clerk J. Herbert Nelson in recognition of CRN’s “commitment to interreligious dialogue, mission and relationship building.”

A key person for CRN is Ann Van Dyke, co-chair of the CRN Response Team, which is alerted when an incident occurs in the area that needs addressed.

One of the issues to which CRN responds to is that of bullying in schools of children who are of a foreign nationality or of a marginalized group such as children of color. The group will contact the school where the incident occurred to make sure it is aware of the situation and offer CRN’s help. CRN will also reach out to the families of those affected by the bullying, offering support and education to them while also referring them to other agencies who might be better equipped to handle the situation.

CRN has created a variety of programs and events to counteract bias and to promote better understanding of those who are “other.” CRN has also organized unity events in response to organized hate group demonstrations, rallies against Islam and in response to racial violence in Charlottesville and elsewhere.

While CRN started in 2008, it was after the events of Sept. 11 seven years earlier that the roots of the organization were planted. Soon after that tragic day, Margee connected with Samia Malik, a Muslim woman from nearby Mechanicsburg, to help Margee and her congregation learn more about Islam.

“Samia and some of her colleagues came and presented a really thoughtful series for us at Market Square on the tenants of Islam,” Margee recalled. “She and I became really good friends, and thereafter she would call or email me when either her family, people in the Muslim community or even around the country were targeted because of the focus from 9/11.” 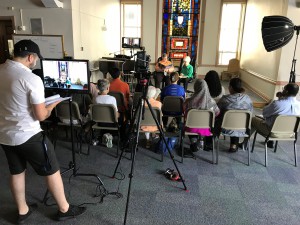 The Community Responders Network filmed three “Welcome the Stranger” videos in July, helping to explore the roots of race, bias and hate. The Synod of the Trinity partnered with CRN in this project and will make the videos available for use in presbyteries and congregations.

Margee with members of Market Square Church’s Peacemaking Committee tried to address these incidents as best they could but quickly realized that they needed to reach out to others in the community to adequately respond to the needs of those targeted. Margee, with the blessing of her then-senior pastor the Rev. James D. Brown, eventually sent out an email to other leaders in the Harrisburg area inviting them to come together to address these concerns. This group became the Community Responders Network with the active support of Market Square Church and the YWCA of Greater Harrisburg.

“We formulated how we would go about speaking out, realizing that community leaders and concerned citizens needed to speak out with a moral voice – a united voice – and to find ways to be supportive of people who were targeted,” Margee said.

Margee added that Ann Van Dyke often reminds those working with CRN that “silence is the welcome mat for hate.”

The need for such voices became all the more imperative in the months leading up to the 2016 presidential election.

“When Donald Trump became such a visible presence in that election cycle, we could see the incidents of bias ramping up in communities, in schools, in front of Muslim communities, in African-American places of worship,” Margee recalled.

That’s when Farzana contacted CRN to see what it could do to support Muslims and many others being targeted during this volatile time. A “call to action meeting” was held a short time later, with more than 100 people turning out to see what they could do regarding not only issues involving Muslims, but also those in the Jewish, African-American and LGBTQIA communities as well as immigrants and refugees.

“That gave CRN a tremendous boost,” Margee said. “It provided a whole new group of people. We knew we were not as representative as we should be but had struggled to get to that point. It was heartening that those from the marginalized communities as well as more concerned residents came together and greatly energized and reformulated how CRN would work.”

CRN continues to help dissolve issues that crop up in the Harrisburg area by using different methods to get the job done. Simply put, if you ask Margee, it’s a challenge that Christians have been charged with.

“I had been distressed when my friend Samia would call me and I didn’t know what to do,” Margee said. “We realized more and more people were being subjected to harassment and intolerance and that we needed to face up to that in our community. It’s been inspiring that more concerned people are now working together in the hope of creating a more inclusive community. As Christians, and as all people of faith, that’s certainly what we are called to do.”