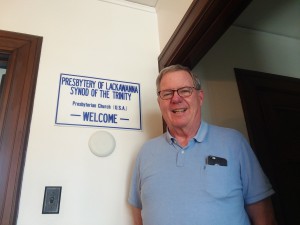 A famous quote from Abraham Lincoln was a common fixture displayed over the desk of the Rev. Dr. Brent Eelman. However, Brent took the liberty to slightly edit the saying, “The dogmas of the quiet past are inadequate to the stormy present. The occasion is piled high with difficulty, and we must rise – with the occasion. As our case is new, so we must think anew, and act anew. We must disenthrall ourselves, and then we shall save our country.”

“I crossed out ‘country’ and I put ‘church,’” Brent continued. “I think that Lincoln was onto something 150 years ago, and we need to be thinking that way today. We must disabuse ourselves of the way things were and we must think anew and act anew because our case is new.”

The new acting transitional general presbyter at Lackawanna Presbytery is using this mindset to help him guide the presbytery through a time of change.

“My sense of calling is to lead the church to rise to the occasion that God has put in front of us,” Brent said.

Brent joins the Lackawanna Presbytery staff following the passing of Transitional General Presbyter Virginia Miner, who joined the church triumphant in February after a nearly two-decade battle with breast cancer. Brent has been a pastor in Missouri, Wisconsin, New York, Texas and most recently Ohio, but spent his longest time serving as the head of staff at Abington Presbyterian Church (from 2001-15) in the Presbytery of Philadelphia. He eventually moved into the Lackawanna Presbytery and became a member of the presbytery in December of 2016.

“I’ve always been active in the life of the presbytery,” said Brent, who is a former moderator and vice moderator of the Presbytery of Philadelphia. “I cannot remember a time when I was not active heavily in the life of the presbytery. In retirement, I realized that with HR (honorably retired) after my name, I’m no longer required to go to presbytery meetings or participate. But I cannot imagine not being involved as a presbyter. The church has been my life, and I still wanted to give as a volunteer to the church.

“What intrigued me about this was that it would be a more focused time of participation in the life of the presbytery. It is 12-15 hours a week. It’s not burdensome. I can still consider myself retired. I have gifts that match up well with some of the challenges that they have.”

Brent’s most recent call was for two years in Poland, OH, where he was the interim pastor helping get that congregation back on its feet following a time in which it lost nearly 300 members in seven years. He addressed causes of conflict and started a healing process that led to the church’s first capital campaign in 20 years that dealt with communication issues, organizational inefficiencies and deferred maintenance. The congregation is now in a time of evolution that is not uncommon in the church world, and his experience helping revive that church has given him tools that will suit his latest call in Lackawanna.

“Lackawanna Presbytery, like most presbyteries, is in transition,” he said. “The Presbyterian Church as we know it is going through tremendous change. It is a time for us to actually lead with energy, intelligence, imagination and love. And I think I bring that to the task.”

Brent knows he has big shoes to fill in replacing Virginia, who was beloved by many in the region. And Brent was no different.

“She treated me like a colleague,” he said. “I experienced her warmth. I really grew to admire her and to warmly court her as both a pastor and a presbytery leader. I thought the world of her and I was deeply saddened by her passing.”

Virginia was leading Lackawanna in the right direction, and Brent is just hoping to continue what she started.

“I want to keep things going, to make sure the tasks are done,” he said. “There are administrative responsibilities. The other goal is a facilitation process where the presbytery as a whole begins to think beyond just merely functioning.

“This presbytery is in a transitional mode. We are about to lose the majority of our full-time clergy in the next two or three years (because of retirement). These are significant positions that will be opening up in the presbytery and we need to be thinking proactively in terms of it. A major goal that I have is to lead the presbytery through some type of process where it begins to think beyond tomorrow.”

Regardless of what exactly is ahead for Lackawanna, Brent is excited for the challenge that lies before him as he works to lead the presbytery through this time of change.

“Small community churches have a responsibility of filling some of the gaps that are developing in social services in our country,” Brent said. “God has led me to think about these things and to imagine what a church could be beyond what it is now.”