Virginia Miner, 59, was beloved leader, friend in Presbytery of Lackawanna

“She was the anchor, and very much the heart, (of the Presbytery of Lackawanna).” 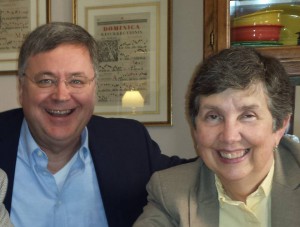 Virginia Miner and Bill Carter worked side-by-side in the Presbytery of Lackawanna for more than three decades. ‘She had a dogged devotion for God and her people,’ Bill said.

That’s how the Rev. Virginia Miner was described by one of her colleagues in the week following her passing on Feb. 19. Virginia, the transitional general presbyter in Lackawanna since 2016, had been battling breast cancer for nearly two decades. She was 59.

“I have never known anybody as steady and persistent without being obnoxious,” continued the Rev. Bill Carter, the pastor at First Presbyterian Church of Clarks Summit and a friend of Virginia’s for over 30 years. “She had a dogged devotion for God and her people. She was someone who would get off a plane from a big trip and drive directly to the hospital to hold the hand of someone who was dying.”

“She led an exemplary and inspiring Christian life,” added Marge Zeigler, the stated clerk and administrative coordinator at the Presbytery of Lackawanna. “She was faithful and loving until the end. Her wisdom will be with me until my end.”

“She was always sensitized to those who were kind of on the margins and put herself on the line for them,” Bill said.

Bill, who first met Virginia at a Presbytery of Susquehanna Valley meeting in New York in the early 1980s, said Virginia’s trip to Nicaragua several years later helped establish her focus for ministry.

“What she encountered in that country around that time changed her forever,” Bill said. “She came back transformed, wired up about justice and injustice, about fairness, about inclusion for all people. It really put her in high gear. If ever there was a cause that came up that would be able to give a hand up to those who were disadvantaged, she was on it.

“It was kind of remarkable in a presbytery that has demographically been very white and suspicious of people who are not from this region. It wasn’t a glass ceiling, it was glass walls, and she smashed through them. She said we have to be open to all people.”

Virginia’s leadership was also instrumental in the merger of the Calvin and First Peckville congregations, which she originally took over in 1984 as a “fill-in” after their pastor suffered a heart attack.

“She ended up staying for the next 33 years,” Bill said of Virginia, who was a senior at Princeton Theological Seminary. “It was a journey. Like a lot of churches that share a minster, they didn’t collaborate well on all things. She became the linchpin.” 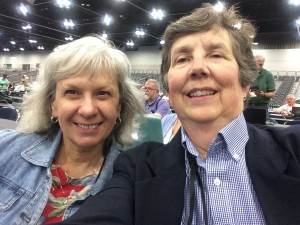 Marge Zeigler and Virginia Miner share a moment at the 2016 General Assembly in Portland, OR.

When Virginia was diagnosed with breast cancer in 2001, the two congregations decided to lessen her load, opting to hold one combined service a week while alternating locations monthly. The two churches’ session meetings were also held on the same day out of a convenience for Virginia.

“Rather than ever force the merger, she let it happen organically,” Bill recalled.

Her presence and influence wasn’t lost on those around her at what would soon become First United Presbyterian Church of Lackawanna Valley.

“One of the elders (of her session) said, ‘She always led with a quiet voice. She could move mountains without shouting,’” Bill said. “She had a spiritual and moral authority that was very well grounded, a deep intellect that was not egg-headed or brainy. She lived very modestly, pretty much at minimum salary most if not all of her career. It never slowed her down.”

Virginia’s love for her friends and the presbytery continued until the end as she stayed in contact with those around here despite her failing health.

“Even when her health began to decline, she pushed herself to be present in the office and at meetings, never complaining about the discomfort it caused or the energy it sapped,” Marge said. “When she couldn’t get around anymore, she e-mailed and texted often, at all hours, sending news of ‘our’ Presbyterians and requests for updates on others. I was humbled, and often incredulous, at her concern for others – in her final months she continued to care for everyone around her. Although she was down to just a few working fingers, she texted condolences for a family funeral, prayers for a sick friend (and some for a cat) and congratulations on a Super Bowl celebration.”

“I always marveled at her ability to analyze a situation, engage those involved in conversation and help all discern a way forward,” Jim said. “She had a keen intellect and a backbone of steel when it was necessary to make hard decisions or confront conduct unbecoming of a pastor. I will miss her stories of adventures in the church and on her vacations. In these last years as she stepped up to be our transitional presbyter, the combination of her being a presbytery native, as well as a world-traveler, avid reader and student of changing times and needs, made her a perfect choice to help our presbytery begin to address the world we now are called to serve.”

Aside from filling General Assembly and presbytery commissioner roles and chairing various leadership committees throughout her career, Virginia also showed her depth by one time teaching a “Gospel & Golf” class at a Ghost Ranch. In 2015, she was the recipient of the Gov. Robert P. Casey Medal for a Lifetime of Service award.

“She was always full of surprises,” Bill said. “She had ever-revealing depth. There was more to her than anybody ever realized. She had a significantly substantial soul.”

A full obituary is available here.

The Synod of the Trinity is grateful for Virginia’s work and service to the region and sends condolences to her family and friends.