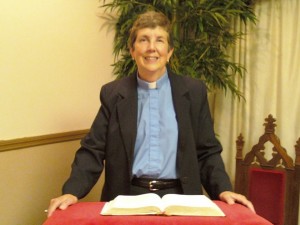 The Rev. Virginia Miner received the Gov. Robert P. Casey Medal for a Lifetime of Service award in early May because of the work she has done at First United PC of Lackawanna Valley.

For over 30 years, the Rev. Virginia Miner has been making a difference in the Peckville, PA, community. Known to most in that area as the pastor at First United Presbyterian Church of Lackawanna Valley, she has had her hands in things like the CROP Hunger Walk, the Lackawanna County Commission for Women and the Family to Family Thanksgiving basket giveaway program, just to name a few.

“I saw my work as helping the church community serve the local community, and we’ve had that dialog for as long as I’ve been here,” she said.

Rev. Miner’s work hasn’t gone unnoticed and on May 7 she was recognized for it. That evening at the Scranton Hilton & Conference Center, Rev. Miner and three others were honored with the Gov. Robert P. Casey Medal for a Lifetime of Service. It’s an award Rev. Miner had no idea she was even in the running for.

“Not only did I have no idea, I had no expectation,” she said. “I have been to their affairs and have known people who have received it – and it’s always for service – but for all kinds of reasons it never occurred to me that I would ever be in that group.”

Presented annually by NeighborWorks Northeastern Pennsylvania and named after the state’s late governor, the honor acknowledges the efforts of the recipients while at the same time educating others of that work. NeighborWorks Northeastern Pennsylvania “empowers individuals and families through homeownership education and promotion, property rehabilitation and affordable lending.”

While Rev. Miner can point to her lengthy list of community volunteering, the one thing she is most proud of is how two churches became one under her leadership. In December of 1984, she became the pastor of both the Calvin United Presbyterian Church in Olyphant and First United Presbyterian Church in Peckville. Located about two miles apart, they decided in 2000 to look into buying a property and coming together to form a single congregation.

“I’m clearly proud of the fact that the two churches were able to unite,” she said. “In conjunction with that, I’m also very proud that we have become known as a church that cares about the community it sits in. Our name is known in the community for a place that people can show up for Weight Watchers and find ways to solve problems. We’re known in the community as being a place where not only can you get help but you can find a place to rest and also be challenged in the work that God has for all of us.”

It took over a decade for the two churches to purchase a property and turn the restaurant that was there into a sanctuary. In 2013, the church was dedicated and two worshiping communities became one. It involved plenty of trust in the Lord, a faith journey that has paid off with a single congregation that has a weekly attendance of around 60 and a membership close to 180.

“God is involved in all of it,” Rev. Miner admitted. “So much of it we could neither have predicted nor planned for, and that’s true for both of the congregations and my life as well. We as a congregation and I as a leader sought God’s direction through prayer and study and listening to one another and listening to the Spirit in our midst. That’s enabled us to go in directions we would have never thought of.

“At many points in the process of my life and in the life of the congregation things have come about that are incredibly unexpected. I think for me personally it’s a great joy to just listen and pray and do the work that I need to do and that the congregation has in their heart also.”

Rev. Miner isn’t getting caught up on goals for the next 30 years at First United PC of Lackawanna Valley, preferring to let the church follow the direction of the community instead.

“We’ve been less of a goal-setting organization as we have been a look-around, pay-attention, where-are-we-being-led (one),” she said. “We seek to provide a place for ourselves in the community for education, for spiritual growth, for worship and for food. Everything we try to do fits somewhere in those categories. These days there’s a lot better plan to not only help people get the food they need but also how to prepare it and how to eat well.”

Helping the community. It’s what’s important to Rev. Miner, and in turn it’s what’s on the agenda at First United PC of Lackawanna Valley. It’s not about awards or being recognized for any of them, and that’s exactly why Rev. Miner and the work she is doing with her congregation was lifted up on the first Thursday in May.

Note: Monsignor Joseph Kelly, Annette Palutis and Mayor David Wenzel were also honored at the Gov. Robert P. Casey Medal for a Lifetime of Service dinner. Information on the dinner can be found here.