What’s in a name? Plenty if you ask Shiloh PC of Oxford

Shiloh Presbyterian Church isn’t “second” to anyone anymore in Oxford, PA. The African-American church that had been known as Second Presbyterian Church for the past 134 years has undergone a name change in part to honor its heritage and also because the congregation is making new strides within the community. For instance, Shiloh recently built a Community Outreach Center in a “test-of-faith” project that has further strengthened its bond with its neighbors. 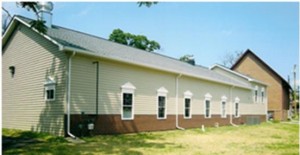 The Community Outreach Center at newly-named Shiloh Presbyterian Church in Oxford was dedicated in September.

The changes have created a new sense of belonging for the church.

“Some of our older members who passed on, one of their dreams was to see that building,” the Rev. Tyrone Carter said of the center. “As we began to step out on faith, it was us trusting in God. Not only me, but the congregation recognized that if we were going do this, God is going to have to be with us because we can’t do this by ourselves.

“Slowly but surely things just fell into place and after a while the building took on a character of its own. Things just started happening that let us know that God was with us. That has driven our church spiritually because we have something tangible to show that God is with us. All we stress is that it was not us, it was God. If we begin to take credit for that, then I have a feeling we’re going to be in trouble paying for it. We’re being very humble and appreciative to God for all that he has done for us.”

About 10 years ago, a property behind the church became available for purchase and the idea was that Shiloh could buy the land to put up a Community Outreach Center and also add parking spaces. At the time, Shiloh only had $40,000 in its reserves to put toward the project that had an estimated price tag of $600,000. But within 2 ½ years, Shiloh’s bank account swelled to $200,000 through generous donations from worshipers and others within the community, making the land acquisition and building project a reality. In fact, a 15-year mortgage was paid off in five, adding to the blessing.

“It was a test of faith,” Rev. Carter said. “That gave our congregation the impetus to know that God is with us. If we were able to do this, we could move on. Not everybody was on board when we were talking hundreds of thousands of dollars for a small congregation. As time went on, I think other people caught our vision and we did get quite a bit of help from outside of our church, whether it be businesses or private donors or whatever.”

The Presbytery of Donegal also contributed some much-needed funds to the project, for which Rev. Carter was especially thankful.

The property behind the church originally had a building on it, but the previous owners knocked it down before Shiloh PC purchased it. Reconstructing a building played into a majority of the cost, but it has paved the way for a place that now houses classes in computer literacy, job finding, exercise and nutrition. A grant has helped supply the center with laptops and other pieces of technology. The space can also be rented for parties and has a full kitchen available.

“The idea is to have community activities in the building that will help the community,” Rev. Carter said.

It’s created a dynamic that no one saw coming.

Worshipers at Shiloh PC walked into the church’s new Community Outreach Center singing “We’ve Come This Far By Faith” during the building grand opening in March.

The Community Outreach Center was dedicated in September of 2014 about six months before the church’s name change to “Shiloh” became official. The church had hoped it could dedicate the building and announce the new name at the same time, but it took a little longer for the name change to happen. But that is about the only thing that hasn’t gone right for Shiloh these days.

“Once we did the groundbreaking, the positives started,” Rev. Carter said. “The congregation was proud of what God was doing through us. We are here where we are not because of our own doing but because God helped us.”

In March, the church officially changed its name to Shiloh Presbyterian Church. The church’s history had been a topic of discussion during annual homecoming meetings, and the question was asked whether Second PC’s name could be changed to “Shiloh” like was originally intended over 140 years ago.

In 1874, a group of faculty wives from the Lincoln Seminary petitioned the presbytery in Chester County to start a Presbyterian church for African-Americans. The wives wanted the church to be named “Shiloh,” but by the time a church was built in 1881, it had been named Second Presbyterian Church of Oxford because there was already a First Presbyterian Church in the area. Rev. Carter suggested that the name “Second” was given because the First Church was “appointed to look over us.”

It was eventually agreed upon that, with the steady growth in the church and renewed presence in the community, now would be the perfect time to make the name change happen. The Presbytery of Donegal signed off on the idea, and the church put things in motion for its name to be changed to Shiloh PC.

“We figured that if we were starting out to trust in the Lord, maybe we should go back to the original name that the ladies thought would be a good name,” Rev. Carter said. “After researching Shiloh, we recognized that the church would be a House of Peace.”

Shiloh stands for peace and tranquility and was the early capital of the Israelites before they eventually built their temple in Jerusalem. Shiloh was the seat of government for the Israelites and was where things like the Ark of the Covenant – a chest for the Ten Commandments — were kept.

The changes have corresponded with a congregation that has grown 30 percent in recent years and now has close to 80 people attending its worship service on Sunday mornings. Rev. Carter thinks the work the church is doing in Oxford definitely has brought in some new faces.

“I’d like to think it’s our commitment to be true to the Word,” Rev. Carter said speculating on the increase in attendance. “When people see that you’re about something, people have a tendency to come by to see what’s going on. Some decided to stay, but we have quite a few visitors on Sundays. If people would commit to being a member, then our church rolls would really grow.”

It’s all part of an incredible time at Shiloh Presbyterian Church where God is working.

“I just stand back in awe of what God has done for us,” Rev Carter said. “We’re very humble about it and it just seems like he continues to bless us every day.”