People don’t normally associate humor with the Bible, especially around the Easter season. Pastor Taylor Camerer isn’t one of those people. 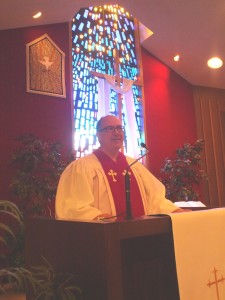 An eight-week pulpit supply pastor at Northway Presbyterian Church in Williamsport, PA, Taylor began his two-month stay on the Sunday after Easter with a sermon that was called “Bright Sunday.” Taking ideas from “Holy Humor Sunday” in which some pastors use as an opportunity to dress in costumes for a light-hearted Sunday worship, Taylor didn’t go quite that far in his very first Sunday at Northway PC. Instead, he just preached about how humor is very much a part of the Bible and how it should be embraced.

“There’s an old tradition in the church, rooted in the early church theologians who saw a practical joke played on the devil when Jesus was raised from the dead,” Taylor said. “So Easter was a God-supreme joke played on death. On either Easter Monday — the Monday right after Easter Sunday — or Bright Sunday — the Sunday after Easter – they were kind of days of joy and laughter, parties and picnics, pot lucks to celebrate Jesus’ resurrection. There was a tradition of practical jokes. There was a lot of water being thrown back in the day – drenching people with water, baptizing so to speak – singing and dancing. There was a tradition of telling jokes and telling stories with a twist at the end that end unexpectedly with a laugh.”

Taylor included about a half dozen stories or light-hearted tales that had surprise endings in his service on April 12. Because it was his first service, he kept it fairly low key compared to what some churches were doing elsewhere.

The Fellowship of Merry Christians is an organization that highlights different ideas on how to celebrate “Bright Sunday.” One church in North Carolina has a pastor who delivers his sermon dressed as a medieval jester with a sermon on I Corinthians 4:10 titled “Fools For Christ’s Sake.” Another congregation in Missouri put up a sign that read “If you must sleep in on Sunday, sleep in here.” The church then laid out sleeping bags on the back pews and actually allowed for a few minutes for naps during the service.

Adding a humorous element to the service can be a pleasant change for some worshipers.

“God so often uses tragedy and suffering and difficulties,” Taylor said. “There’s a lot in the world that is sobering and sombering but there’s a difference between being serious and solemn and just kind of being sour.”

Among the most recognizable ways the Bible uses tragedy to send a message is around Easter when Jesus dies on the cross only to have the stone rolled away from the tomb and find out he had risen from the dead. Taylor is quick to point out that there definitely was a party-like atmosphere outside the tomb when word quickly spread of the resurrection.

“There was a euphoria, a hilarity, an unspeakable gladness that your sins had been forgiven,” Taylor said. “To be glad and to not be fearful is an imperative in the Bible. There is a victory over death, but the twist is what men meant for evil, God meant for good.”

Ultimately, injecting some laughter into a service now and again, or devoting an entire sermon to Biblical humor once a year the week after Easter, can help people better understand the way in which God works.

“Part of humor and making things unexpected in church at times is part of listening for God because he arrives in unexpected ways and unexpected times,” Taylor said. “If you have everything planned out and thought out and it’s always the same, you’re not really doing a very good job of preparing people to find God.”