Church on the Mall offers unique setting in Plymouth Meeting

There are plenty of examples in the Bible of people, including Jesus, who took their ministry out into the streets. And if Jesus was on earth today, one can assume that he’d be doing just that, reaching out to those places like bus stops, train stations and shopping malls. One Presbytery of Philadelphia congregation is already doing just that, and its name says it all. 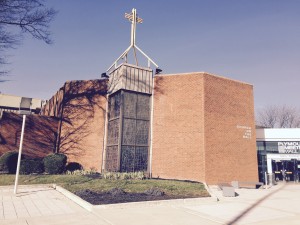 The Church on the Mall has been in the Plymouth Meeting Mall since 1966.

The Church on the Mall has been supplying a ministry in the Plymouth Meeting Mall for nearly 50 years, operating a space that has its share of members but that also caters to walk-up traffic in a highly-visible location. Billed as “America’s oldest congregation worshiping in a mall,” the Church on the Mall is located between Macy’s and Boscov’s and serves between 35-45 people on a given Sunday morning. That figure includes a handful of visitors per worship, which can be anyone from a mall security guard to someone looking for inspiration.

“We get really interesting foot traffic,” remarked the Rev. Sarah Colwill, who has served as their pastor since January. “People just walking by, coming in because they have some spiritual, theological questions. Somebody walked in last week and wanted to be baptized. And some people will use one of our spaces if they just want to sit and read.”

The Church on the Mall, which has 85 members, started in 1966 when three nearby churches — Holy Redeemer in Norristown, Ambler Chapel (a ministry of Holy Redeemer) and Conshohocken Presbyterian Church — came together to form one congregation. During this merger, it was the vision of the Rev. Allan Kinloch to begin worshiping in the shopping mall. For the first six years, the congregation didn’t have separate, specific space within the Plymouth Meeting Mall until the current church was constructed in 1972. 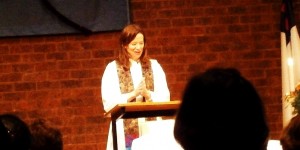 The Rev. Sarah Colwill delivers a sermon at the Church on the Mall in Plymouth Meeting, near Philadelphia.

“It actually looks a lot like a typical church, but it’s right up against the mall,” Rev. Colwill said, adding “To enter the church, you walk in the mall entrance, and the church lines a short corridor to the food court. We have a sanctuary with a beautiful stained-glass window. It uses chairs instead of pews so it can function as a multipurpose space. There are also several offices and small meeting rooms on two different levels.”

While Church on the Mall worships at 10:30 a.m. on Sundays and has programs like Bible study and choir, the space is also utilized by groups like Alcoholics Anonymous and Life Choice Hospice as well as things at the other end of the spectrum like the Norristown Garden Club and Weight Watchers.

“It was the vision of the founding pastor to have this kind of outreach to the community,” Rev. Colwill said.

Three churches came together to form the Church on the Mall, which was an idea by one of the leaders to minister in a shopping mall.

One downfall of not having its own space is that it makes it harder for special events to be added, like a monthly community meal for instance. Because the rent charged to the groups helps the Church on the Mall cover its expenses, it’s difficult to take that income away. It’s also hard to plan special events because groups like the Peppermint Dance Club need to meet on a regular basis, normally on Friday and Saturday nights.

Having a mall setting provides other obstacles as well.

“You can’t solicit in the mall,” Rev. Colwill said. “I would walk by the Easter Bunny and I wanted to give all those people in line one of our cards, but I know I can’t do that. We have our limits. Even getting something on the billboard out front costs thousands of dollars for an afternoon. While being in a mall gives us great visibility, that’s been a little bit of a challenge, too. 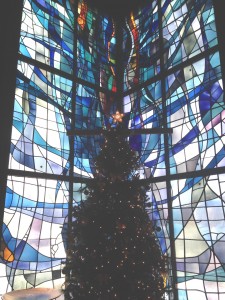 A stained-glass window is the backdrop for a Christmas tree at Church on the Mall in Plymouth Meeting.

The mall is changing, too. It used to have all of the same elements – main walkways with department stores and a food court. Now, many malls are designed to have access to stores from the outside. Plymouth Meeting Mall has both of those elements as it is trying to adjust from the past to the present.

“Malls are not exactly the thriving places that they used to be,” Rev. Colwill said. “It’s one of those malls that’s kind of in transition.”

Another unique quality of the Church on the Mall is its diversity, which could be related to its unusual location.

“The uniqueness that this particular congregation has is that there’s a lot of diversity within this congregation,” Rev. Colwill said. “We have racial ethnic diversity, we have socio-economic diversity and theological diversity. One of the assets of this church is that younger people want more diversity. They don’t want to be worshiping in church with everybody who looks and talks and is living the same life as them, and we have that to offer.”

And it takes the right people in a unique situation like this to be welcoming to both ends of the spectrum, which is exactly what the Church on the Mall has.

“The congregation here consists of committed, deeply spiritual people,” Rev. Colwill said. “They’re really committed to living out their call to discipleship and strengthening their own relationship with God. One of the real hallmarks of this church is their hospitality. They take their hospitality really seriously. They take their mission to be out in the world really seriously.”

Good thing, because that’s exactly where they are.