American troops are involved. So are women recovering from breast cancer and newborn children. Guys in their leather jackets on Harley-Davidson motorcycles are pitching in, too. What was originally taken as a leap of faith seven years ago has quickly grown into something very special at Bald Eagle United Presbyterian Church in Mill Hall, PA. 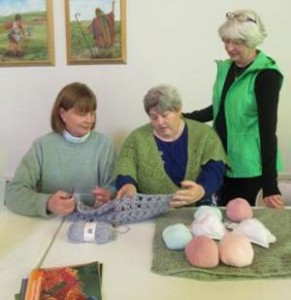 The church’s Prayer Shawl Ministry is in its seventh year and has grown immensely from its humble beginnings. Originally created to knit shawls to give comfort to those facing surgery or other hardships, the ministry now includes everything from prosthesis to “Pocket Prayer Shawls for Troops” to “Pretty Pockets,” which are given to people who are coming home from the hospital with post-surgical drains like a colostomy bag.

The brainchild of Pastor Susan Champion, the ministry has grown from just a couple of worshipers from Bald Eagle United PC to 30 people from the Mill Hall community who are eager to knit and crochet. One knitter is over 104 years old, and the volunteers are supplying their own yarn to keep the program running cost-free, adding to the powerful ministry this has become.

“When I started it, I did it on a wing and a prayer,” Susan said. “I did not know if anyone would come through that door or not but they did. They came and those who came wanted to give back because they had either been healed of cancer or someone in their family had been healed of cancer and they wanted to do something for a ministry.”

The gatherings occur at noon on the first Wednesday of the month and consist of lunch and a couple hours of knitting and sharing. For most, the bulk of the knitting occurs in their homes prior to the monthly gathering where much of the conversation includes the reading of “thank you” notes from people who have received the handmade items, enabling the volunteers to feel the joy for the items they have created.

“It’s only through the grace of God that I have not had to ask the church for one single penny,” Susan said. “We provide all of the yarn. We provide lunches for everyone. We provide the needles and the patterns, the fellowship and the fun.” 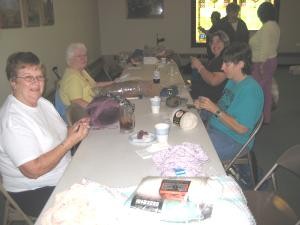 While knitting prayer shawls as a type of comfort blanket distributed to those facing illness was the original intent, the Prayer Shawl Ministry has developed into much more. Knitters have come in requesting to make things like children’s clothes, which are now being given to every Mill Hall couple with a newborn. And thus the “Infant Sweater Ministry” was born. Another person came up with the idea of creating “Pretty Pockets” as a fashionable holder for post-surgical drains, and this outreach was organized.

Among its most popular items being created through the so-called “Wednesday Weavers” group is prosthesis for women who have undergone mastectomies. Susan came up with the idea after reading about such a thing in Reader’s Digest, and it has taken off by leaps and bounds.

“I found out there is no place where people who had mastectomies – and 40 percent of the women who are diagnosed with breast cancer have to have mastectomies – there was no place where they could go to get a free kit for prosthesis,” she said. “If you have insurance you can get prosthesis but they are made of silicone and very heavy. These are hand-knitted and made out of special yarn that’s skin sensitive. We make them in sizes and we weight them.”

Many times women who go through this procedure can’t wear the prosthesis until they are healed from the surgery, but the knitted ones from Bald Eagle United PC can be worn immediately.

“Oftentimes women cannot get their prosthesis because they have to heal, so they have to go around with socks in their bra, but ours you can put in right away,” Susan said. “We have had calls from all over the United States. … We have one lady who stepped up to the plate and she said ‘My mom died from breast cancer. I want this part of the ministry.’

“We’re the only organization in the state of Pennsylvania that does this. I find it very interesting that it’s a church, and it should be.” 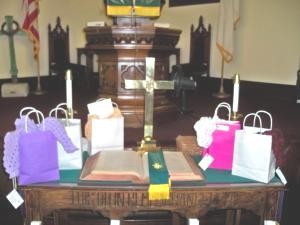 Another outreach that is fairly new to the Wednesday group is “Pocket Prayer Shawls for Troops.” These 2.5-inch squares are sent to American military for them to wear in their helmets. They are knitted or crocheted from either cotton or wool – other materials will melt to a soldier’s head if they are under fire — and come with a tag explaining their purpose.

“We’re starting with 1,000. We have people already asking us when they are going to be ready,” Susan said. “But we’re not just going to stop there. We’re taking these Pocket Prayer Shawls to emergency rooms, to hospital waiting rooms, to nursing homes and putting them in baskets for anyone who is walking by and needs to hold something in their hand — something tangible so they know that God is working in their lives.”

Other items that are being made include celebration shawls, lap robes, comfort dolls for infants, mittens, scarves, booties and neo-nic sweaters and hats. One way of getting these items to the people who need and request them is through the Susquehanna Valley Big Twins Motorcycle Club. The club does a yearly “Knit N Run” on their cycles, delivering the knitted goods to places like hospitals and nursing homes.

The Bald Eagle United knitters don’t take orders, they just make what they can make and send them out to those in need. 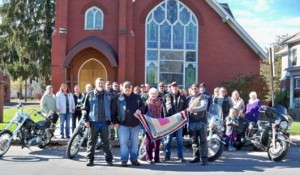 “We pray over these items,” Susan said. “We don’t know where they’re going to end up, but we just know whoever receives these, our prayer is that God’s peace and his presence just surrounds them. We pray that they are able to feel the presence of God working in their lives. These items are tangible evidence that other people care.”

Susan, who admits she has never made a prayer shawl in the seven years of the ministry, is quick to credit the volunteers for what this ministry has turned into.

“I give all of the glory and all of the credit to our Lord and also these wonderful ladies,” she said. “I’m in awe. We’re non-denominational. When we come together, we are all knitters, and we’re doing something to advance God’s kingdom.”

Note: Anyone interested in learning more about the knitting ministry at Bald Eagle United Presbyterian Church or who would like to request an item should contact the church at (570) 726-4112 or email Pastor Susan Champion atms_champion@comcast.net. The prosthesis kits are free to anyone and there are no mailing restrictions. When ordering a kit, a size for the prosthesis will be needed.